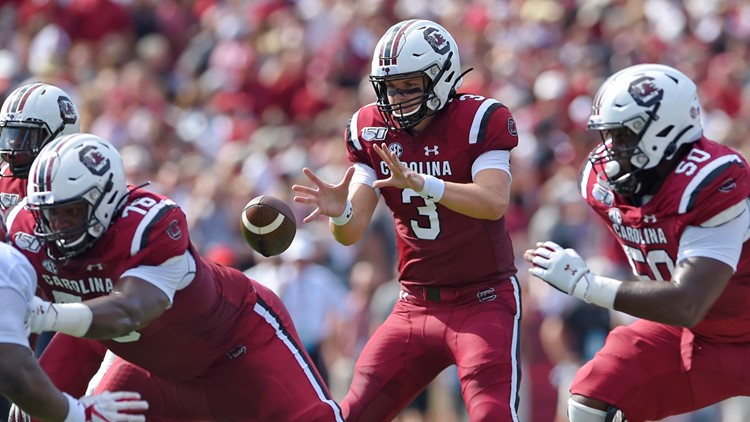 Photo by: AP
South Carolina Ryan Hilinski takes the snap during the first half of an NCAA college football game against Alabama Saturday, Sept. 14, 2019, in Columbia, S.C. (AP Photo/Richard Shiro)

It’d be hard to say Ryan Hilinski hasn’t had a great start at South Carolina with the freshman coming in for injured Jake Bentley and playing pretty well through his first eight quarters.

He led the way to a record-setting performance against Charleston Southern and seemed unfazed by the moment playing No. 2 Alabama, but both of those games have been at home.

Now the Gamecocks’ freshman is getting ready to make his first road start this weekend at Missouri, something he hasn’t experienced yet in his college career.

“It’s always a concern. It comes back to what we talked about the first two weeks: what does Ryan feel comfortable with?” Will Muschamp said. “Let’s make sure we get him in situations he feels comfortable with.”

Hilinksi’s looked really good in his first two starts, becoming one of just two freshmen quarterbacks to throw for 300 yards in a game—Jake Bentley and Todd Ellis were the others—and operating the offense at a high level.

But, this will be his first test where it’ll be loud when he’s out on the field. The Gamecocks practice with crowd noise already in practice but it’s a little different once a young quarterback gets into a game atmosphere.

“I think you definitely have to speak up a little more,” Dakereon Joyner said. “There’s a little more detail in terms of listening. It can be challenging for some people but you have to be locked in and ready to go.”

Hilinski is coming off a week where he threw for 324 yards against Alabama with two touchdowns and an interception.

It was good enough to earn him SEC Freshman of the Week Honors, the first of potentially many more over his career.