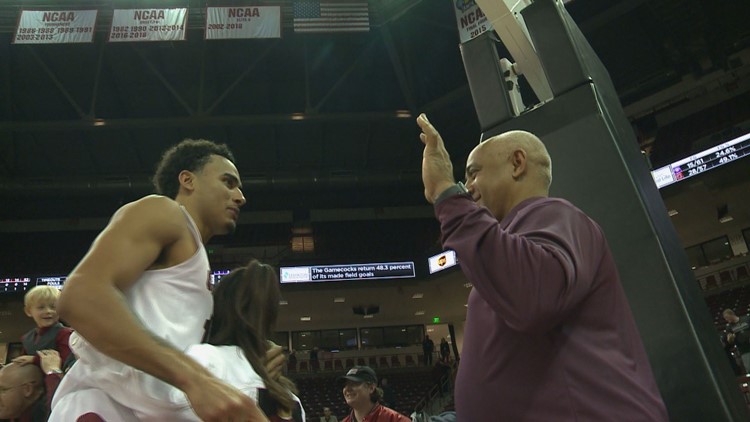 COLUMBIA, S.C. (AP) - Justin Minaya had 17 points and 11 rebounds in his return from a knee injury a year ago and South Carolina won its 19th straight season opener with a 77-55 victory over North Alabama on Wednesday night.

Minaya, who missed the final 27 games last season, matched his career best in points and surpassed his previous mark for rebounds. And it was Minaya who led the Gamecocks throughout.

He made 5-of-6 shots the first 20 minutes as the Gamecocks opened a 10-point lead at the break. After the Lions of the Atlantic Sun Conference cut it to 43-39 with Christian Agnew's bucket early in the second half, Minaya and Jair Bolden took control for South Carolina.

Bolden hit a basket, then made South Carolina's first 3-pointer of the season to go up 48-39. Bolden's crisp pass found Minaya for another bucket and Minaya went high to collect Trae Hannibal's missed shot for another basket and a 52-39 lead.

North Alabama could not respond in the season opener for both teams. The Lions fell to 0-17 all-time against Southeastern Conference opponents.

South Carolina coach Frank Martin said several times last season that Minaya was among his most complete players and a rising leader when he got hurt in 2018-19.

Minaya looked the part in the Gamecocks opener, smoothly moving down the court and finishing with several floaters over the smaller Lions. Minaya hit his first five baskets before missing a close-in shot. The 6-foot-6 sophomore also had seven rebounds the first 20 minutes.

Bolden added 14 points for the Gamecocks.

The Lions struggled with their outside shooting against taller, longer South Carolina, going just 24 of 61 (24.8 overall. They were 2 of 21 from distance.

North Alabama: The Lions don't get much of a chance to regroup after South Carolina. Following a home game with Division II Carver, North Alabama faces another college basketball giant in Indiana on Nov. 12.

South Carolina: The Gamecocks were pressed some and took nearly 30 minutes to start to dominate. A.J. Lawson, who went through the NBA Draft process last spring before returning to school, struggled much of the game. The team's top returning scorer, Lawson was just 1-of-4 shooting and finished with eight points in 24 minutes.