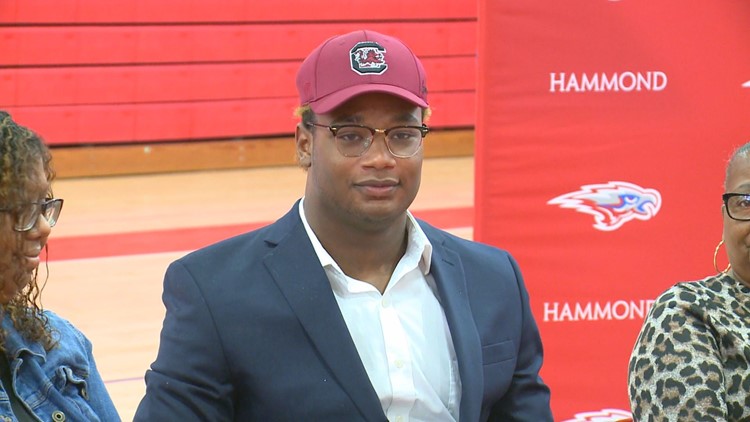 Photo by: WLTX
Hammond defensive end Jordan Burch poses with his Gamecock hat during a ceremony at the school on National Signing Day.

Jordan Burch is officially on board at USC

One day after National Signing Day, Jordan Burch's paperwork arrived at its destination.

The Hammond senior and the state's top prospect for the 2020 class sent his national letter of intent to the Gamecock football office Thursday evening, making him officially a member of Will Muschamp's fifth recruiting class.

Rated as the number two defensive end in the country, Burch committed to the Gamecocks in December but did not sign with the intention of taking part in a ceremony with his Hammond teammates.

But last month, he visited LSU and even one recruiting pundit predicted Burch would flip to the Tigers. Instead, Burch went to South Carolina last weekend for his official visit, giving Muschamp the last word with Burch and his family before National Signing Day.

On Wednesday, the Burch story took another turn as Hammond held a ceremony at the school where Burch did participate with his fellow Skyhawks. But his letter of intent did not reach the Gamecock football office and as a result, Muschamp was not allowed to comment on Burch per NCAA rules.

The rest of the day came and went with no LOI in the possession of the Gamecock football staff, sending the message boards buzzing with speculation that Burch was having second thoughts - even though he was wearing a Gamecock hat at Wednesday's ceremony.

"For the next three or four years, I'll be playing with my teammates," Burch said during the ceremony, referencing future Gamecocks Alex Huntley, Bradley Dunn, and Fabian Goodman - all of whom are his Hammond teammates.

But roughly 30 hours after that ceremony ended, Burch's LOI was in the possession of the Gamecock staff allowing Muschamp to send out his signature tweet with emphasis.

"It's a great way to close out our 2020 signing class with Jordan Burch deciding to stay home and play for the University of South Carolina," Muschamp said in a statement.

"He is a wonderful person and I'm excited that he will be part of the Gamecock family. We really appreciate his mother, Henri, trusting us and sending her son to the in-state school. Jordan is an explosive athlete, extremely smart and versatile player who can do a lot of things on the football field and I can't wait to coach him."

Burch was part of Hammond's three consecutive SCISA state championships. A force on the defensive line, he has always lined up at receiver, running back and quarterback for the Skyhawks. He also plays point guard and the post on the Hammond basketball team.

"It's a great day for the University of South Carolina," Hammond head football coach Erik Kimrey said in a statement.

"I'm thrilled for Jordan who will add not only extraordinary talent to the program, but highest of character as well."

In spite of all the drama surrounding Burch and his decision, he is described by the Hammond coaches as "a great kid".

He is the highest rated signee for the South Carolina program since Jadeveon Clowney who himself did not sign until the week after National Signing Day in 2011. He signed on Valentines' Day - his birthday - at a nationally televised ceremony from South Pointe High School.