Michigan decides to stick with Jim Harbaugh with 5-year deal

Harbaugh is now under contract at Michigan through the 2025 season with his new deal. 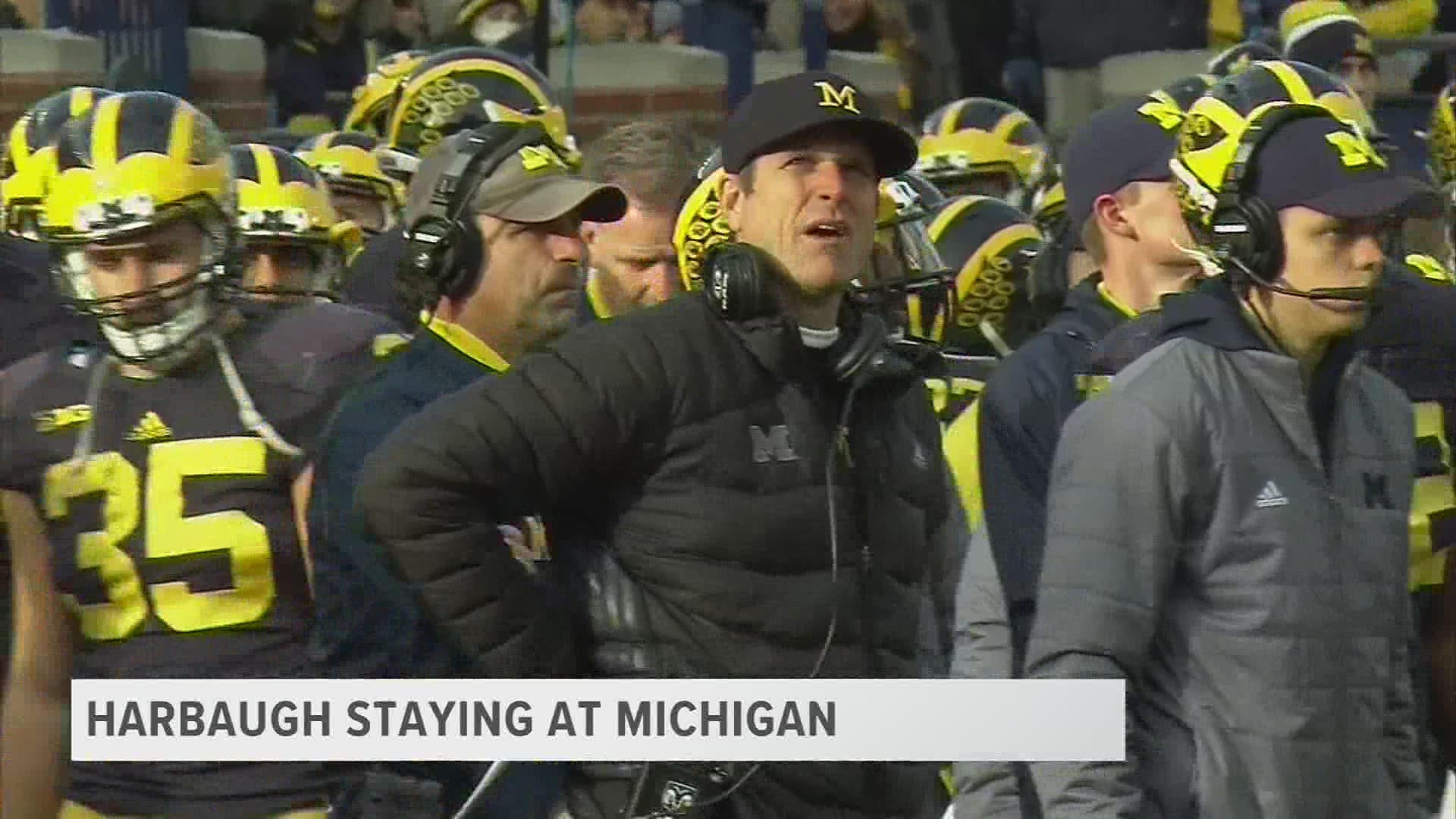 Michigan has decided to stick with coach Jim Harbaugh, finalizing a new, five-year deal on Friday.

The school will pay him $4 million per year and as much as $8 million annually if he meets certain benchmarks, according to a person familiar with the contract who spoke to The Associated Press on condition of anonymity because the terms were not immediately released.

“My thanks to athletic director Warde Manuel for the trust that he has shown in allowing me to continue to coach the University of Michigan football team, and to President Mark Schlissel and the Board of Regents for their ongoing support,” Harbaugh said.

The deal ends months of speculation about Harbaugh’s future. He could have potentially returned to the NFL or the school could have cut loose a coach with one year left on the seven-year contract paying him about $7 million per season that he signed after leaving the NFL.

Harbaugh is now under contract at Michigan through the 2025 season with his new deal.

“I continue to believe that Jim is the right man to lead our program in pursuit of Big Ten and CFP championships,” Manuel said. “Our program didn’t achieve at a level that anyone expected this year but I know those setbacks will drive the coaches, players and staff moving forward. Jim is a tireless worker and competitor. Following the completion of the season we talked for many hours on what it will take for Jim to lead and get us back on the right trajectory."

Harbaugh has won nearly 70% of his games, but is winless against archrival Ohio State and as an underdog against any opponent. Michigan has not won the Big Ten since 2004, seven seasons after its last national championship.

The Wolverines were 2-4 in Harbaugh’s sixth season, which ended with three straight games being canceled due to a COVID-19 outbreak within the program. They were 0-3 at the Big House, too, including listless losses to rebuilding rival Michigan State and previously wineless Penn State.

“There is work to be done and challenges to be addressed,” Harbaugh said. “These challenges are being addressed as we continue to strive for excellence in the classroom and championships on the field, a message that I hope is noted in the language of our agreed-upon contract."

Harbaugh's hiring was hailed in late 2014 and some suggested the former Wolverines quarterback was going to be a savior for college football’s winningest program.

It hasn't worked out that way so far.

Harbaugh seemed to be the perfect person to turn around Michigan’s program, which had slumped after Lloyd Carr’s retirement following the 2007 season, given his success with the San Francisco 49ers and as the coach at Stanford.

He didn’t dampen enthusiasm with a pair of 10-win seasons, but he followed that up by averaging four losses the following three years. This all came alongside a salesmanship that stood out in the staid Big Ten: Harbaugh starred in a rap video, traveled the country for youth camps, took his team to Florida for spring break and overseas on trips, and even had a sleepover with a recruit.

It all helped his Q score, but hasn’t done much for his wins and losses.

There were questions about Harbaugh's future well before this pandemic-altered season kicked off. In July, Harbaugh said he had been closing in on a contract extension earlier in the year until the pandemic became the top priority.

That left Harbaugh in a bit of a lurch going into the uncertain season with just two years left on his contract. When Harbaugh was on a Zoom call with reporters for the first time in three-plus months to preview the season, he said there was no update on contract talks.

Expectations were modest for his inexperienced team, which was ranked No. 18 and they went up some after a dominating win at then-No. 21 Minnesota.

It went downhill the very next game when the Spartans and first-year coach Mel Tucker beat Michigan, which was favored to win by 20-plus points. Indiana and the Badgers took turns routing the Wolverines, who needed three overtimes at Rutgers to earn their second win.

Manuel, a former teammate of Harbaugh's under coach Bo Schembechler, has said many times he wanted Harbaugh to lead the Wolverines until he chooses to retire from coaching. And, Harbaugh appears to be happy coaching at the school and living in the town where his father was of one of Schembechler's assistant coaches.