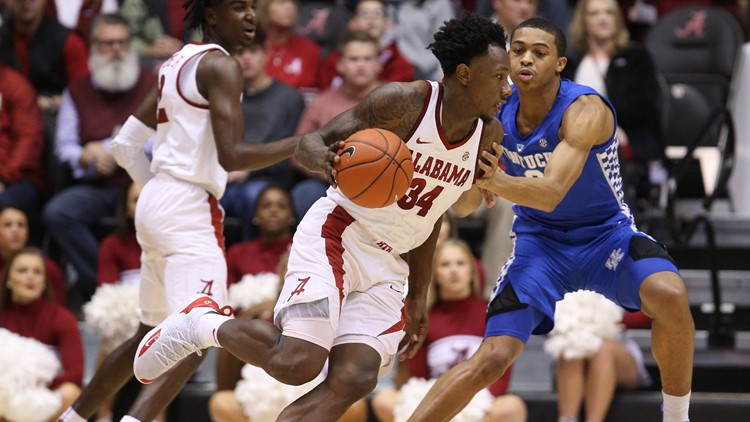 Photo by: USA Today
Tevin Mack drives against the Kentucky defense. He scored 22 points to lead the Crimson Tide Over the Wildcats

COLUMBIA, S.C. — Tevin Mack is coming back to the Palmetto State. The former Dreher High School standout commits to Clemson.

Tevin completed his degree at Alabama and will be a graduate transfer. Mack Per NCAA rules, he will be eligible to play this upcoming season and will not have to sit out.

The former Alabama guard chose Clemson over Oregon and Houston.

Clemson head coach Brad Brownell recruited Mack hard during his high school career at Dreher. Brad knows the kind of player and person he's getting to add his program.

Tevin chose VCU coming out of high school and followed then head coach Shaka Smart to Texas. After a couple of tough seasons with the Longhorns, that included a couple of suspensions, he averaged 14.8 ppg as a sophomore but he eventually transferred to the SEC.

After sitting out the 2017-2018 due to transfer rules Tevin averaged 9.0 points and 3.3 rebounds per game and started 24 of 34 games for the Alabama Crimson Tide last season.

The experienced scorer will be a nice addition to a Clemson team that lost a bevy seniors including guards Marcquise Reed and Shelton Mitchell. Minutes will be available for a player like Mack who can stretch the floor and create space for a team that will have young guards and transfers looking to make an impact.

Tevin is the fourth transfer to join the Clemson Tigers.

The third school in Tevin's college career will be in state and it will give a chance for his family and hometown fans to see him more often.

Another cool thing about Tevin going to Clemson is that two Columbia products could very well be on the floor at the same time this year. Rising junior Clyde Trapp out Lower Richland is coming off a solid sophomore campaign and the two can be nice one-two punch in the back court for Coach Brownell.