Razorbacks, Owls Stir the Memories With Renewal of SWC Rivalry

Jim Harris previews the Hogs first game of the season 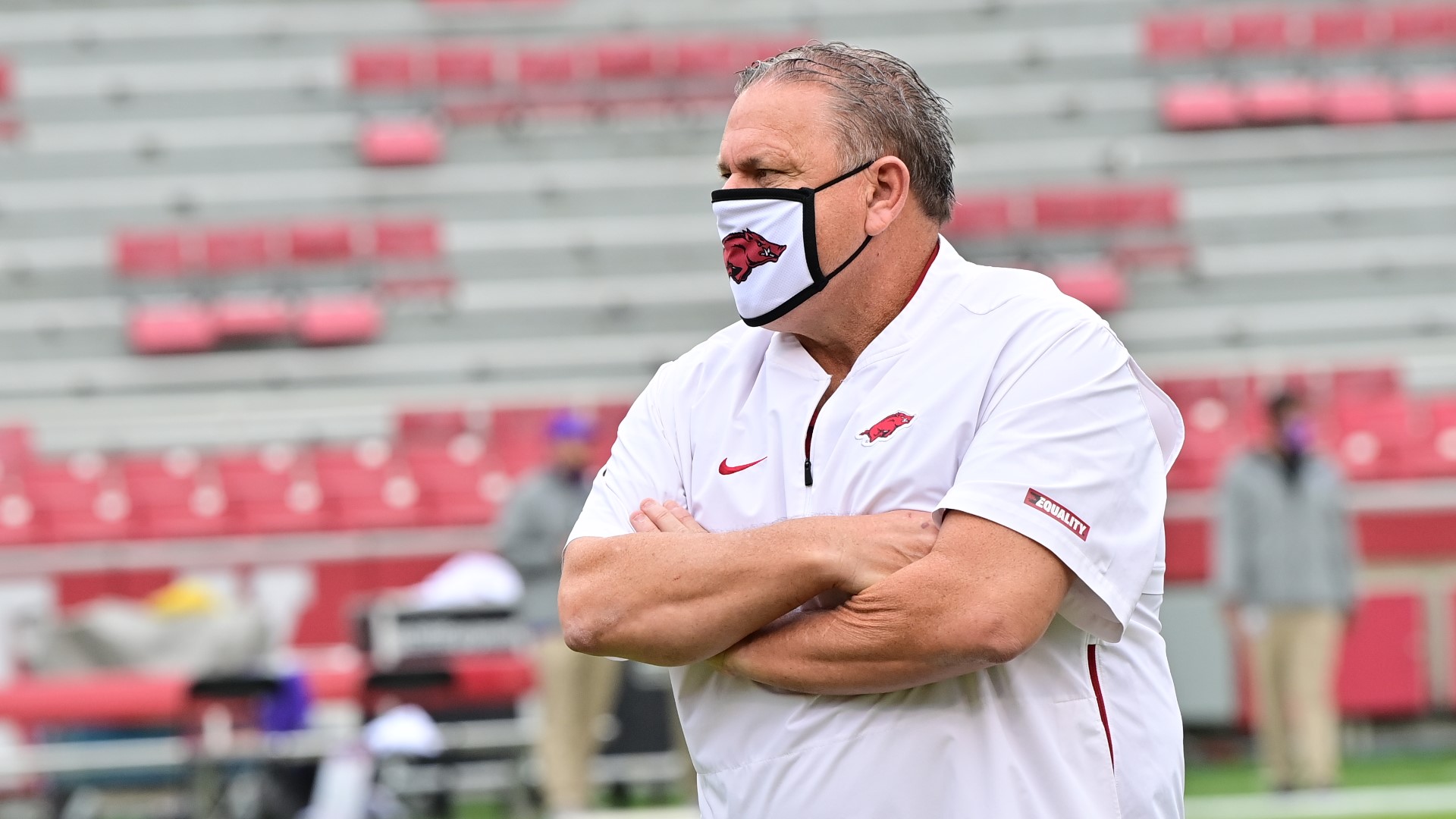 FAYETTEVILLE, Ark. — When Rice and Arkansas competed in the Southwest Conference, Arkansas fans would know quite a bit about what to expect from the Owls during game week between the squads. It’s different these days.

Decades ago, however, Arkansans knew that as bad as the rest of the Owls seemed to be in the late 1970s, future NFL quarterback Tommy Kramer, gave them a chance. Arkies knew of native sons like Chuck Latourette from Jonesboro or Bruce Woolridge from North Little Rock, high school stars who cast their lot with the school in Houston. Latourette, in particular, was quite the all-around star for the Owls in the middle 1960s, moving on to the NFL as a punter and returner, about the time Rice’s football program began to struggle following decades of competing for SWC titles. Rice could still attract the occasional difference-maker, but failed to surround its stars with much ability. Stahle Vincent, for example, one of the trailblazing African-Americans in the SWC in the late 1960s, could do it all at quarterback, but even that wasn’t enough with little to no protection up front. Rodrigo Barnes at middle linebacker chose Rice over hometown Baylor, could have played anywhere, and starred in the SWC before continuing his career with the Dallas Cowboys.

But, as a whole, football all changed for Rice, a private institution of academic renown, when the two-platoon game took hold in 1964. It’s hard for younger college fans now to imagine, but there was a time when college football was not unlike, say, Premier League Soccer in England (or soccer anywhere, for that matter): 11 guys played. On both sides of the ball. The SAME 11 guys per team. Rules kept teams from regular wholesale subbing of fresh players in and out, or the specialized subbing of smaller units on defense for a particular down-and-distance situation that we know today.

“I love it for them that they’re able to reminisce on the old days.” Pittman says on #Arkansas taking on Rice and Texas these first two games #WPS

As the NFL moved to separate units of offense and defense and away from “two-way football,” the college rulesmakers in the 1950s began relaxing their substitution regulations. Such changes paved the way for teams like LSU and Coach Paul Dietzel in 1958 to introduce the idea of specialized units for offense and, especially, defense, where Dietzel created the famed Chinese Bandits, whose specialized skills were instrumental in the Tigers’ first-ever national championship.

And, remember, even with those arcane rules on substitution before 1964, most of the powerhouse college teams still carried around 150 players on their roster, and freshmen WEREN’T eligible.

Rice, TCU, Baylor and SMU had been regular contenders for a SWC title when you needed a great 11 only and not layer after layer of talent behind them. Texas, Texas A&M and Arkansas could often be found near the bottom of the league standings.

A game with Rice in the 1950s for Arkansas fans might be on par with today’s matchups against a Georgia or Auburn. Rice football was so big in Houston 70 years ago, and Owls supporters expected even bigger things to come, that they built the biggest stadium in the SWC in 1952 on Rice’s campus, with a 75,000 capacity. That, folks, was ridiculously large some 69 years ago. Occasionally, like when Texas or A&M came to town, or the NFL’s Super Bowl in 1974, they’d actually fill the place.

Competing with Texas, and Arkansas, and the other financially well-supported public institutions in the SWC completely changed for Rice in the 1960s, though. Also, Rice always numbered far fewer overall students than the rest of the conference even in its heyday, and now the whole game was different. The advent of professional football in Houston (and Dallas) in 1960 also had a huge effect on the support of the Rice football program.

Against Arkansas, however, even as Rice became a bottom-feeder, the Owls would occasionally be a thorn in the Hogs’ side. In the disastrous finish of what had been a highly anticipated 1972 season with Joe Ferguson at quarterback, the Hogs watched the Owls score in the final seconds at War Memorial Stadium and leave with a 23-20 shocker. Lou Holtz’s up-and-down 1980 team, the first of his teams offering indication to fans that the mercurial Holtz was, in fact, fallible as coach and recruiter, blew a 16-0 lead in the fourth quarter to the Owls and lost 17-16, also in Little Rock.

It was even a toss-up for the season finale in 1991 when the Hogs and beleaguered head coach Jack Crowe entered the game at Little Rock with a 5-5 record. This exchange occurred on air (UA sports radio) just before the teams kicked off that day:

Hog color man and SID Rick Schaeffer, excitedly: “If the Hogs can win today, they will most likely earn a trip to Shreveport to play in the Poulan/Weed Eater Independence Bowl.”

Third man in the booth, former Oklahoma Coach and former Hog player and assistant coach Barry Switzer, incredulously: “RICK? WE CAN GO TO A BOWL GAME?!?”

Such was the position Arkansas football found itself as that season and the school’s history in the SWC wrapped. Arkansas, starting a walk-on quarterback out of Mena, Wade Hill, played a solid game and blanked the Owls 20-0, landing that spot opposite the SEC’s Georgia in Shreveport.

That’s the last time the schools have met. Arkansas began competing in SEC football the following season. Rice would eventually hire former Razorback head coach Ken Hatfield and earn part of a five-way tie in the SWC (only in the SWC, right?) before the league soon ceased operations. Four SWC programs joined up with the Big 8 to form the Big 12 in 1996. Rice, Houston, SMU and TCU were left searching for a home, and the Owls found theirs in Conference USA.

The teams usually played in early November as SWC opponents. For this matchup 30 years after the last one, they each open their seasons instead of ending them. Rice is now in the position on the Arkansas schedule of a Tulsa or Louisiana-Monroe. Arkansas in the SEC in recent years has been in the position of a Rice, the team that regularly gets beat down by the stronger powers and can’t fill its 75,000-seat stadium.

Rice coach Mike Bloomgren, in his fourth season as a head coach and who made his coaching bones as an assistant for David Shaw at Stanford, has built a program based on controlling the football with a running game, which eats clock and sets up the play-action pass, while matching that with a sound, scrappy defense that forces turnovers. The Owls wrapped up a 2-3 COVID-shortened season last year with a stunning 20-0 win at 15th-ranked Marshall. Defensively, last year’s tackle star, linebacker Blaze Alldredge, transferred to Missouri, and a returning defensive lineman, De’Braylon Carroll, recently suffered a season-ending injury.

The Owls earlier this summer added Stanford transfer quarterback Luke McCaffrey, son and brother of well-known NFL players, but had yet to name him QB1 leading up to this week. He may share duties with the returning Wiley Green. Neither will wow anyone with their passing arms, but if Arkansas has to commit eight to stopping the Owls’ running game, it will open up some opportunities.

The same is probably true for Arkansas and sophomore quarterback K.J. Jefferson, who has clearly been the Hogs’ starter since the beginning of spring drills. The Owls know the book on Arkansas and Jefferson for now, and if the Hogs are without star junior wide receiver Treylon Burks (foot) for the game, it makes it more certain that Rice will all but beg Jefferson to air it out while ganging up on the running game. That’s what they do, and in C-USA they have done that fairly well. Arkansas wants to start fast; Rice was good last year at keeping opponents from doing that.

Arkansas wants to prove that last year’s surprising, uplifting play following the Chad Morris debacle was not a COVID anomaly and that finally, after several years of looking maybe C-USA or Sun Belt Conference worthy at best (or unworthy, considering the bashings that Morris’ Hogs endured against the C-USA’s North Texas and Western Kentucky), that it is truly deserving of carrying the SEC banner again.

Last year, in Sam Pittman’s first as a Division I head coach, the Hogs faced an all-SEC 10-game slate and surprised Tennessee and its soon-to-be-fired Coach Jeremy Pruitt and also won the state of Mississippi with two wins, finishing 3-7 and ending a 20-game losing streak against SEC teams. They competed hard every week, at least until the season finale against eventual national champion Alabama. The Razorbacks possibly left a game or two on the field due to special teams fiascos, and the boys in stripes may have outrageously had a hand in two losses (Auburn, LSU). The Hogs blew a three-score lead at Missouri in the final seconds. Depth was always going to be a problem for last year’s squad, and injuries to such stalwarts as the surprising Grant Morgan at linebacker, and his running mate Bumper Pool playing most of the year with cracked ribs, and untimely player disqualifications to the likes of freshman safety standout Jalen Catalon due to the often oddly judged “targeting” rule all seemed to come at the most inopportune times for a program trying to rise from the dead.

To open the 2021 season, we’ll have our eyes first on Jefferson’s command of the team and the offense. Can he throw when Arkansas HAS to throw? Does Arkansas have a capable target to take some of the attention away from Burks, now that Michael Woods flew the coop the week after spring drills ended? Will the new freshmen running backs provide the needed depth, speed and punch that was so lacking a year ago behind Trelon Smith? Will another year of experience matter for an offensive line that has mostly struggled since Pittman first left here as Bret Bielema’s offensive line coach and water carrier to be Georgia’s O-line coach, and will some of Pittman’s young recruits begin to make an impact? The defensive line has been beefed up significantly via the transfer portal, which should help the linebackers and secondary, but will Arkansas finally find a consistent and effective pass rush from both its ends? Will the special teams look like they really have a dedicated specials teams coach this year?

All these questions won’t be fully answered Saturday, but we’ll have a general idea before the Razorbacks line up Sept. 11 against Texas in Fayetteville. It’s doubtful we have to mention anything about the history of Texas football to Arkansas fans, though it’s worth saying that when it all started going bad for Rice and the other private schools in the SWC, it coincided with Texas having an incredible run in the 1960s. The Longhorn faithful have been eager to relive that period ever since, firing coach after coach to experience it again.

Jim Harris has covered Arkansas Razorback football since 1976 for a variety of state media organizations, including the Arkansas Gazette and ArkansasSports360.com. He provides commentary each week as part of the team on THV’s “HogZone” Saturdays at 10:30 p.m.

RELATED: What Hog fans need to know ahead of the Saturday season opener