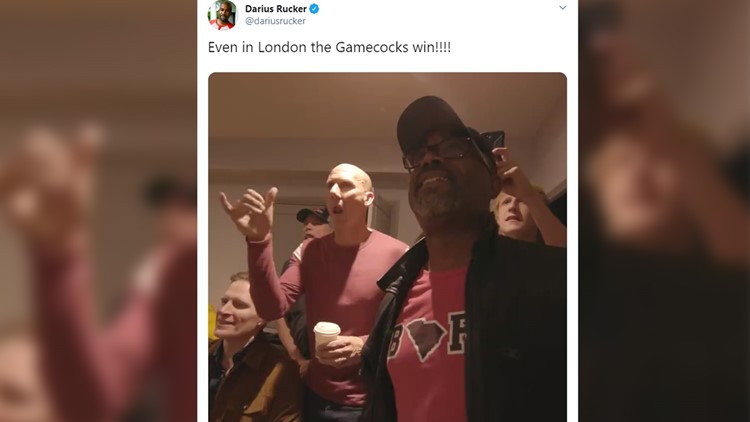 Hootie & the Blowfish celebrate like crazy over USC's upset of Georgia

COLUMBIA, S.C. — Hootie and the Blowfish are die-hard Gamecock fans, no matter where they are. So you know they must have been huddled together somewhere to watch USC's upset win over Georgia, right?

They were. The band was in London Saturday to play some shows. But as Darius Rucker documented on his Twitter page, they were watching all those anxious final moments of the the Gamecocks' 20-17 win over the Bulldogs.

In the video, you can see Rucker, Mark Bryant, and Jim Sonefeld were watching the game with a bunch of friends in a room somewhere in England's capital. The moment shows them waiting to see if Georgia kicker Rodrigo Blankenship would miss a potentially game-tying field goal in double overtime.

RELATED: 'Hell of a day to be a Gamecock:' Muschamp says his team fought hard in upset win

Rucker makes a blowing motion as if he's trying to steer the ball off course, and Sonefeld makes the 'Spurs Up' gesture with his hand. When Blankenship's kick sailed wide left, the room exploded, with people jumping up and down.

The group, of course, former while they were at USC in Columbia. And they've stayed true to their roots over the years, and have made sure people know they're Gamecock fans in many settings, with Rucker frequently wearing USC hats and t-shirts.

RELATED: 'How 'bout them Gamecocks!' reaction to USC's upset victory against Georgia

Just last month, the band played three consecutive shows at the Colonial Life Arena as part of their 'Group Therapy Tour.' The band is coming out with a new album, "Imperfect Circle," that releases next month.