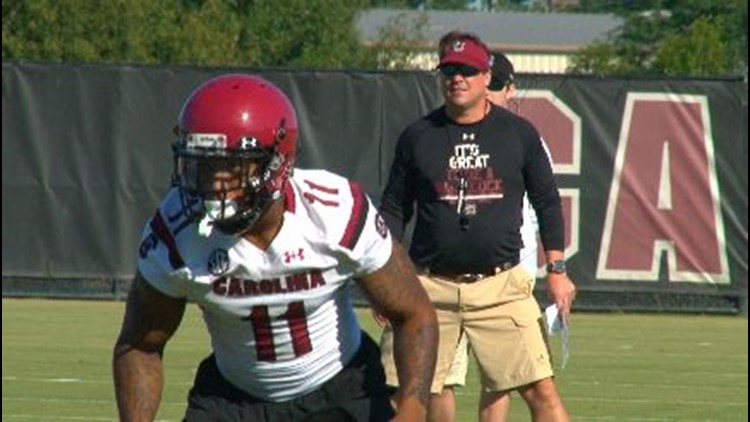 USC head football coach Will Muschamp always keeps an eye on the details during practice.

COLUMBIA, S.C. — The Gamecocks start fall camp in less than two weeks. Football season is right around the corner folks.

USC will have media day on Thursday Aug. 1st and then have their first fall practice that Friday on Aug. 2nd.

This when all the depth charts start coming into focus and all those new recruits and veterans will be competing for playing time.

Will Muschamp will name the backup to Jake Bentley, the rotation for the secondary will be established and we'll know who will turn heads at camp.

"Training camp will be a tell tale sign of how guys define their roles in our organization so that's going to be really important," Muscamp said during SEC Media Days in Hoover last week.

This is arguably the most important time of year other than the actual season.

Muschamp loves this time of year because it's about the process of forming a football team.

"Training camp is essential to having a really good football team and it starts with that first game," Muschamp said. He went on to say, "we have a lot of work to do as far as from a mental standpoint, from a physicality standpoint, being ready for our first ball game and do a good job of installing our offense, our defense and our special teams. There's a lot of team building that has to happen during the month of August."

Here are some of the key dates for USC fall camp.

They get started Friday morning at 9 am on Aug. 2nd or their first practice.

Saturday August 10 is the Colonial Life Fan Appreciation Day. Fans can come out to the Indoor Facility to interact with players and get pictures and autographs.

Monday Aug, 12th is their first scrimmage and the final practice of fall camp is Thursday Aug. 29th before Kickoff in Charlotte against UNC on the 31st.