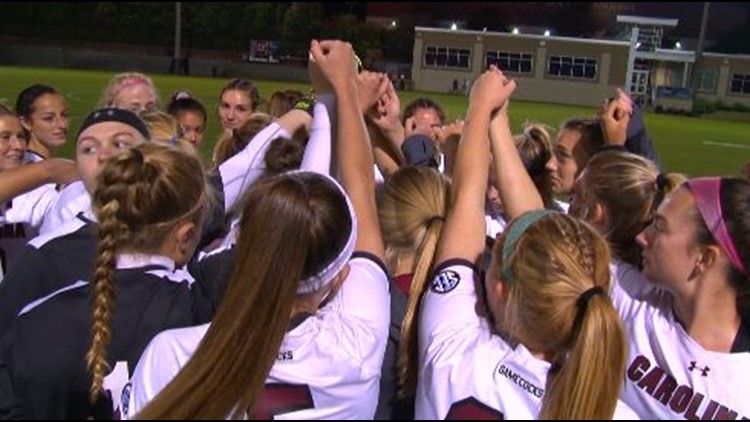 Photo by: Anderson, Reggie
The USC women's soccer team huddles up prior to hitting the pitch for an NCAA Tournament match.

This is the second SEC title for the Gamecocks' soccer team.

Junior forward Ryan Gareis scored the game's only goal in the first half with the help of Sophomore defender Sutton Jones.

Gareis' goal in the 27th minute is her fifth of the season.

The Gamecocks did not allow an opponent to score a goal during the entire SEC Tournament.

"This was the end game for us," Krzeczowski said.  "We had the regular season SEC crown take away from us, and it was our own fault.  We wanted to come in here and make a statement for NCAAs, and that's exactly what this team did."

The Gamecocks now wait to find out where they will land in the NCAA Tournament.  The selection show is Monday, November 11.  Fans are invited to a free watch party on the front lawn of the Gamecock Soccer Operations Building on Marion Street, beginning at 3:45 p.m.  The tournament will kick off November 15-17.

Information provided by the USC's Athletics Communications and Public Relations Department was used in this article.