Trevor Lawrence stepped onto the practice field for the Jaguars this week, plus Travis Etienne works out exclusively at receiver. News and notes from Mini-Camp. 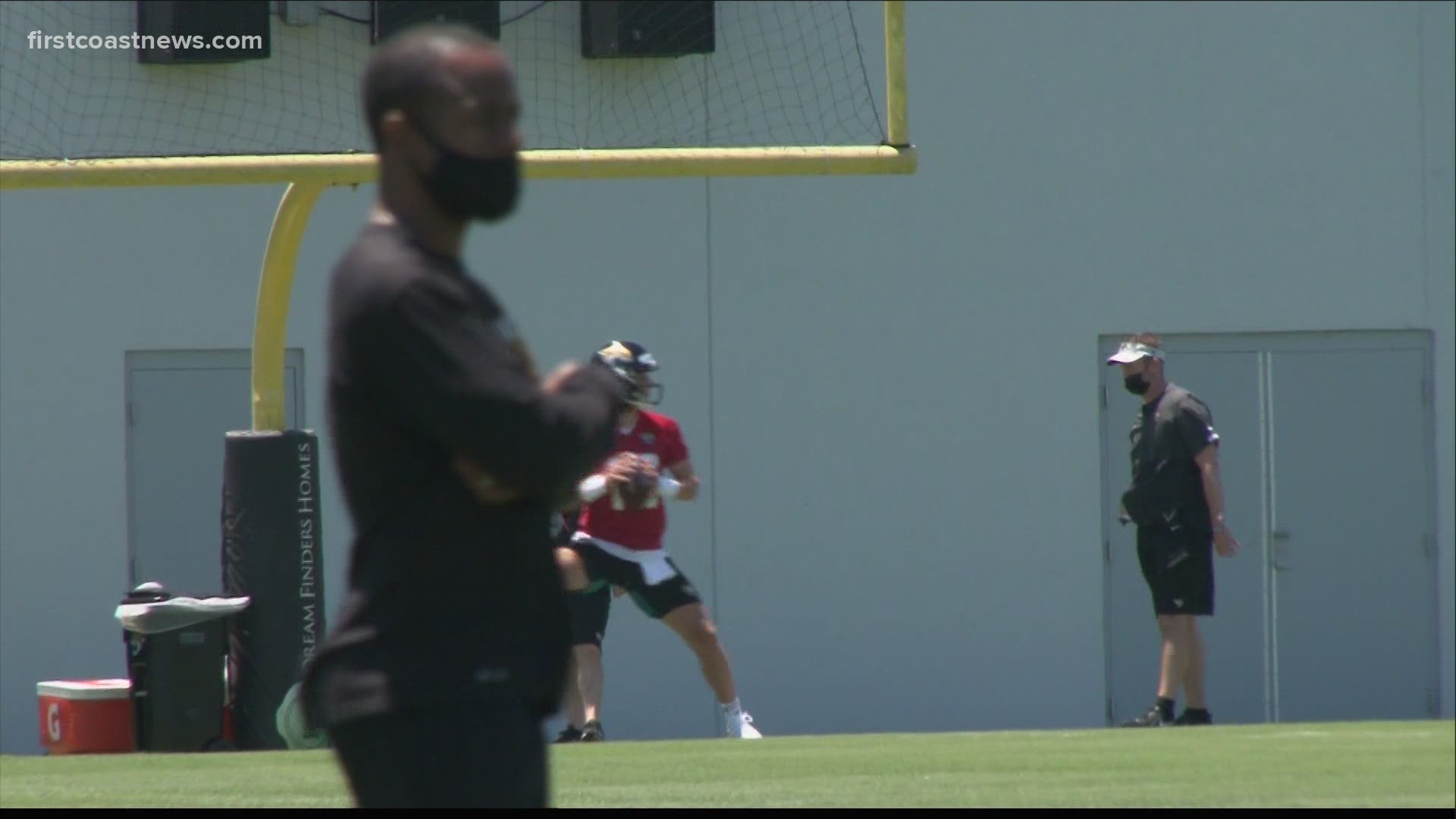 Saturday started with a bang: jersey numbers were finally revealed for the Jaguars' nine, 2021 draftees and their additional, six undrafted free agent signees. The one that caught seemingly every fan's eyes: number one. Travis Etienne, the 25th overall pick in this April's Draft, will rock the No. 1 for the first time in his career in his first season in Jacksonville.

It turned out to be far from the only headline Etienne made this weekend.

"Worst case scenario you have a running back that's elite with receiver skills,” Meyer told the media after practice.

“Football is a game of matchups. I feel like I create a problem outside for a linebacker"

Y'all can save your #Jaguars hot takes. Travis Etienne looks pretty, damn smooth if ya ask me pic.twitter.com/k7hyVH0Pxl

Meanwhile, Meyer also revealed that rookie quarterback and No. 1 overall pick Trevor Lawrence remains on a pitch count after undergoing surgery on his labrum in his non-throwing shoulder in February. Lawrence is being limited to 30-40 throws a day; Meyer expects him to be "close to full-go" by Mandatory Mini-Camp in June.

"I’m still being careful when I’m lifting, I think that’s probably the only limitation as of right now—it’s just not putting too much weight on it," Lawrence told reporters after Saturday's practice. "I’m a little over three months out from surgery, so the repair is healed. It’s doing great, I’ve got full range of motion, pretty much. I need to work on it a little bit, but I’m feeling great. So, we’re taking steps in the right direction for sure, just trying to make sure I’m good come game one.”

Urban v happy about Trevor rolling out of the pocket pic.twitter.com/mykieQQkmj 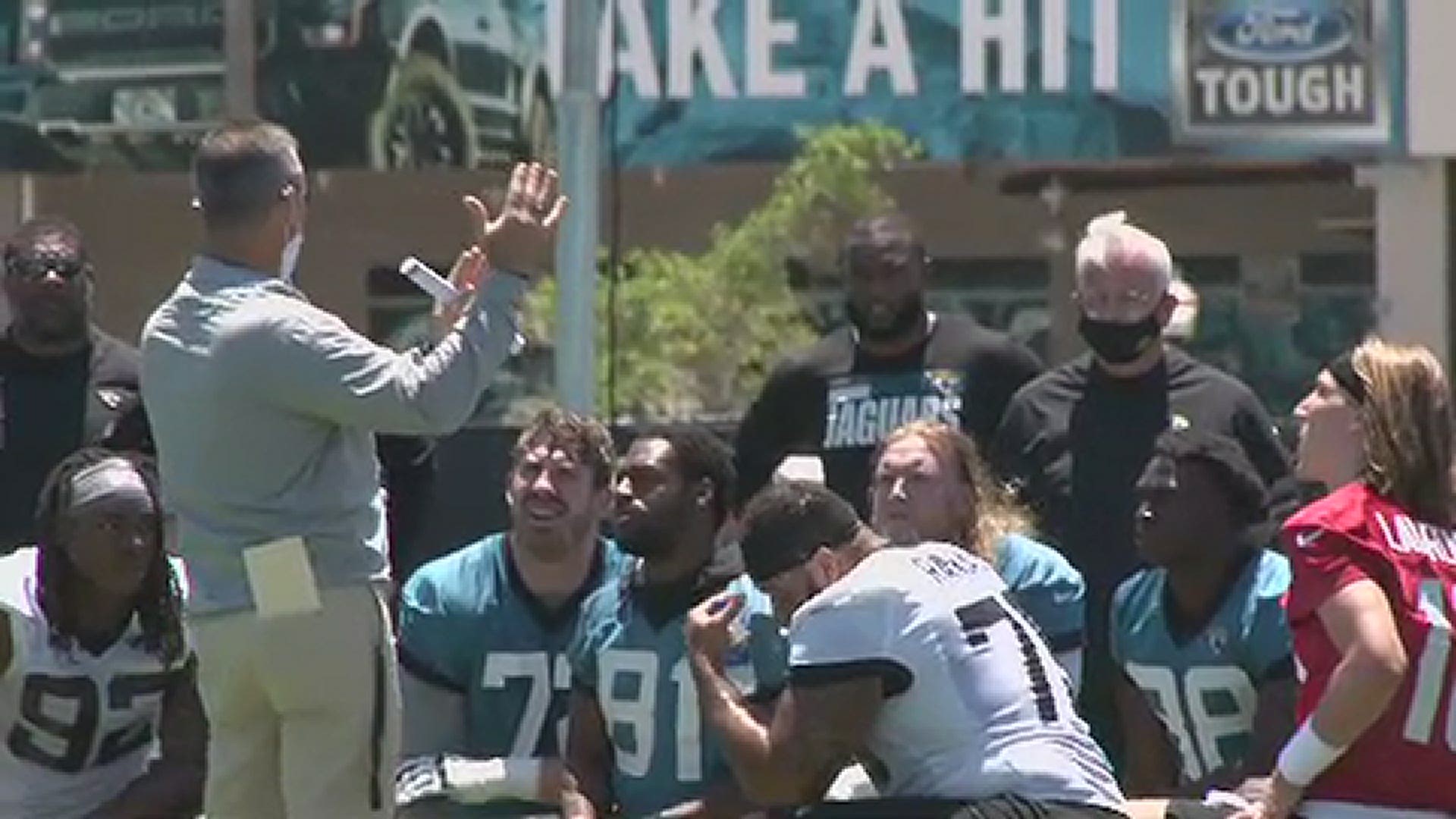 - Fourth-round Edge rusher Jordan Smith is a very large human (that's it, that's the tweet). We knew he was 6'6'' 255 lbs. But just looking at him standing next to UDFA Kenny Randall (6'4'' 305 lbs), Smith looked big. It's height we haven't seen from a Jaguars defensive end since Calais Campbell was traded in March of 2020. Smith's frame is not filled out the same as Campbell, but he only played two seasons of Division-I football -- and that was at the Group of Five level.

- Smith had a quick first-step in defensive line drills, but it was defensive coordinator Joe Cullen and defensive line coach Tosh Lupoi that stole the show. You can take the "defensive line coach" out of Cullen's title... but he's still going to gravitate over towards his guys. Both coaches were fiery and colorful with their commentary -- while only working with three players. Imagine what it will be with a full position group.

- It's tough to truly evaluate an offensive linemen when a, it's non-contact and b, there are only two of them on the field. Good thing for second-round pick Walker Little most of the focus on him surrounded how he has recovered since tearing his ACL; he has not played a minute of actual game-time since 2019. Not only did he look smooth coming out of his stance: Little did not sport a brace over said knee. Most linemen wear braces even when they haven't had the surgery Little underwent.

- I didn't get a chance to ask Trevor Lawrence whether he and Little knew each other before this weekend, but I'm sensing a budding friendship. More than once, Lawrence sought out Little to pat him on the helmet. Seeing as the Jaguars drafted him to be a starting tackle at some point or another... that's a good thing.

No brace for the former #Stanford stand-out #Jaguars pic.twitter.com/opn0TkDSNu

- Lawrence was limited, so I don't want to comment too much on his on-field performance. In addition to a snap count, he's still not cleared to hand the ball off or line-up truly under-center. His leadership in the pseudo huddle was as strong as it has been advertised. At one point, after a receiver jumped before the snap, it appeared most of the rookies rolled their eyes (or they themselves were frustrated from still trying to learn the Jaguars playbook on the fly). After taking a second to calm down the teammates in his immediate vicinity, Lawrence went over and explained to the receiver what the play-call was and gave him a pat-on-the-back.

"We’re here with the rookies, just getting all the guys together, making sure we’re on the same page, reviewing install, walking through stuff... I think leadership is earned, it’s not just given, you don’t just walk in and have it," Lawrence told reporters after. "So, I’m just going to put my head down, go to work and, like I said, do everything I can to put us in position to win.

- After watching the tape back: sure, running back Travis Etienne didn't have the smoothest of hips coming out of his breaks. He also has never trained exclusively with wide-receivers before (although, talking out loud here: isn't it interesting that Meyer told Etienne on Day Two of the NFL Draft -- before the Jaguars knew who they'd be drafting that night and the next day -- that Etienne would be working with the wide receivers? That suggests to me they knew they wouldn't be adding any other running backs. So, calm down James Robinson-stan's. J-Rob remains RB1, with Etienne as Robin to his Batman).

- With that said, one receiver who's fluidity did impress was sixth-rounder Jalen Camp. He's only played organized football since the 10th grade, but this guy just screams athlete. Because of his pitch count, Trevor Lawrence only threw to the first two receivers in each drill. Camp was one of the two every time.

Oooooo yeah. Urban liked this one, too 👀

- The vibe of an Urban Meyer practice was way different than anything else I have experienced on the grounds of TIAA Bank Field. During opening warm-up's, it was Meyer blowing the lead whistle. Meyer consistently brought the rookies in to huddle around him. A PA announcer (?!?) would not only announce how much time was left in each period: he gave a countdown to how many seconds were left in each water break. He also would instruct the players to go "break it down" (or huddle) around Meyer. Doug Marrone certainly led huddles and pep talks. But never a tight-knit lecture circle like Meyer orchestrated multiple times Saturday. 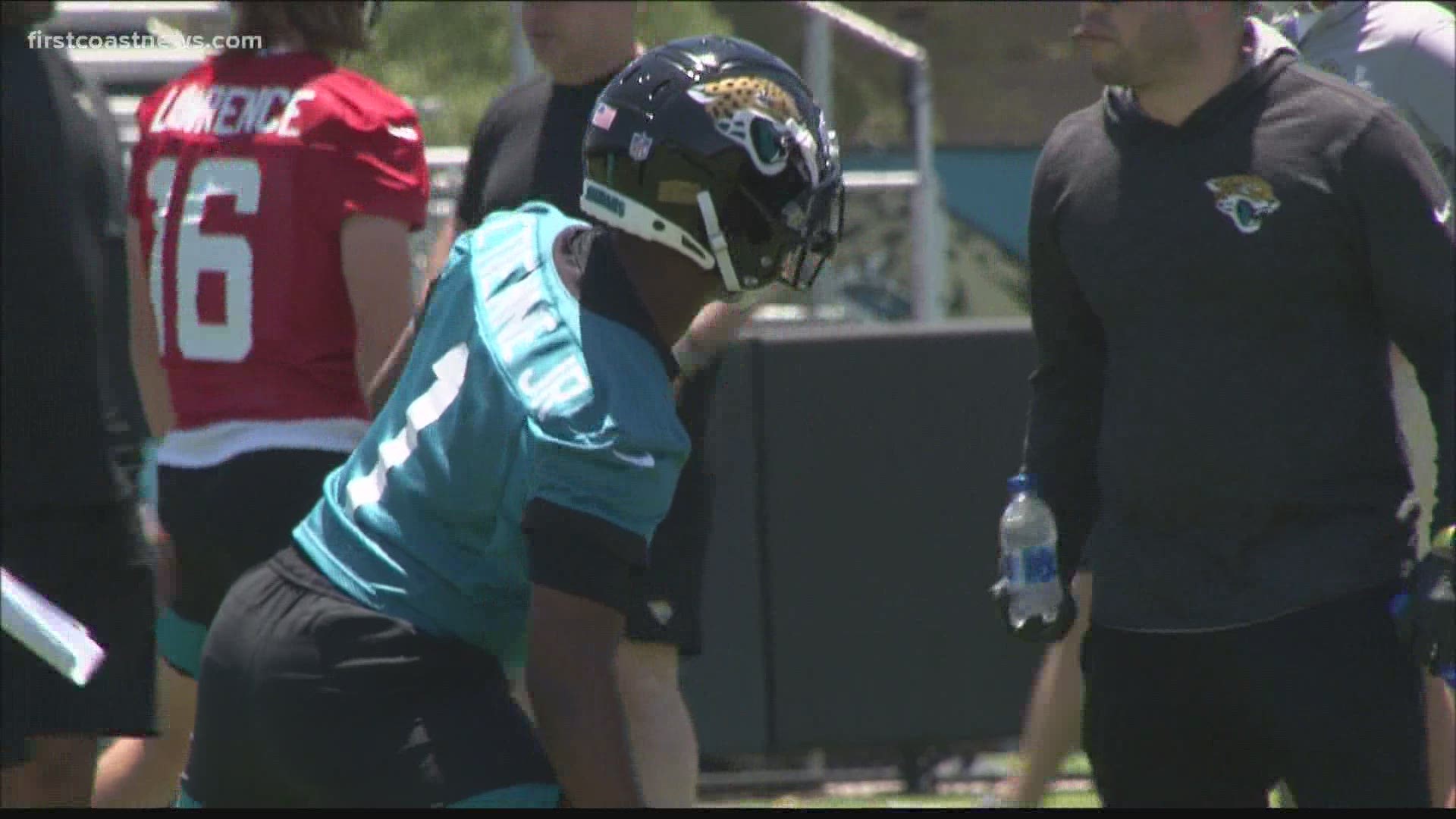 Jaguars Rookie Mini-Camp is May 14-16. The first OTAs of the season for the 90-man roster begin the week of May 24, with the media getting their first look on May 26.