Panthers tight end Greg Olsen entered concussion protocol late in the third quarter after being on the receiving end of a helmet-to-helmet hit.

CHARLOTTE, N.C. — (AP) — Derrius Guice ran for 129 yards and two touchdowns and the Washington Redskins made a late goal-line stand to secure a 29-21 victory over the Carolina Panthers on Sunday.

Adrian Peterson added 99 yards and a score as the Redskins (3-9) piled up 248 yards on the ground and scored their most points this season.

The Redskins spotted the Panthers a 14-0 lead after quarterback Kyle Allen opened the game 8 of 8 passing for 106 yards with touchdown passes to wide receivers Curtis Samuel and D.J. Moore on Carolina’s first two possessions.

But what looked like a Carolina rout quickly turned.

The Redskins upped the pressure on Allen and the Panthers, forcing eight punts and an interception on the next nine possessions. Washington limited the Panthers to 65 yards on those nine drives and neutralized Christian McCaffrey, holding the NFL’s leader in yards from scrimmage to 102 total yards, well below his season average. 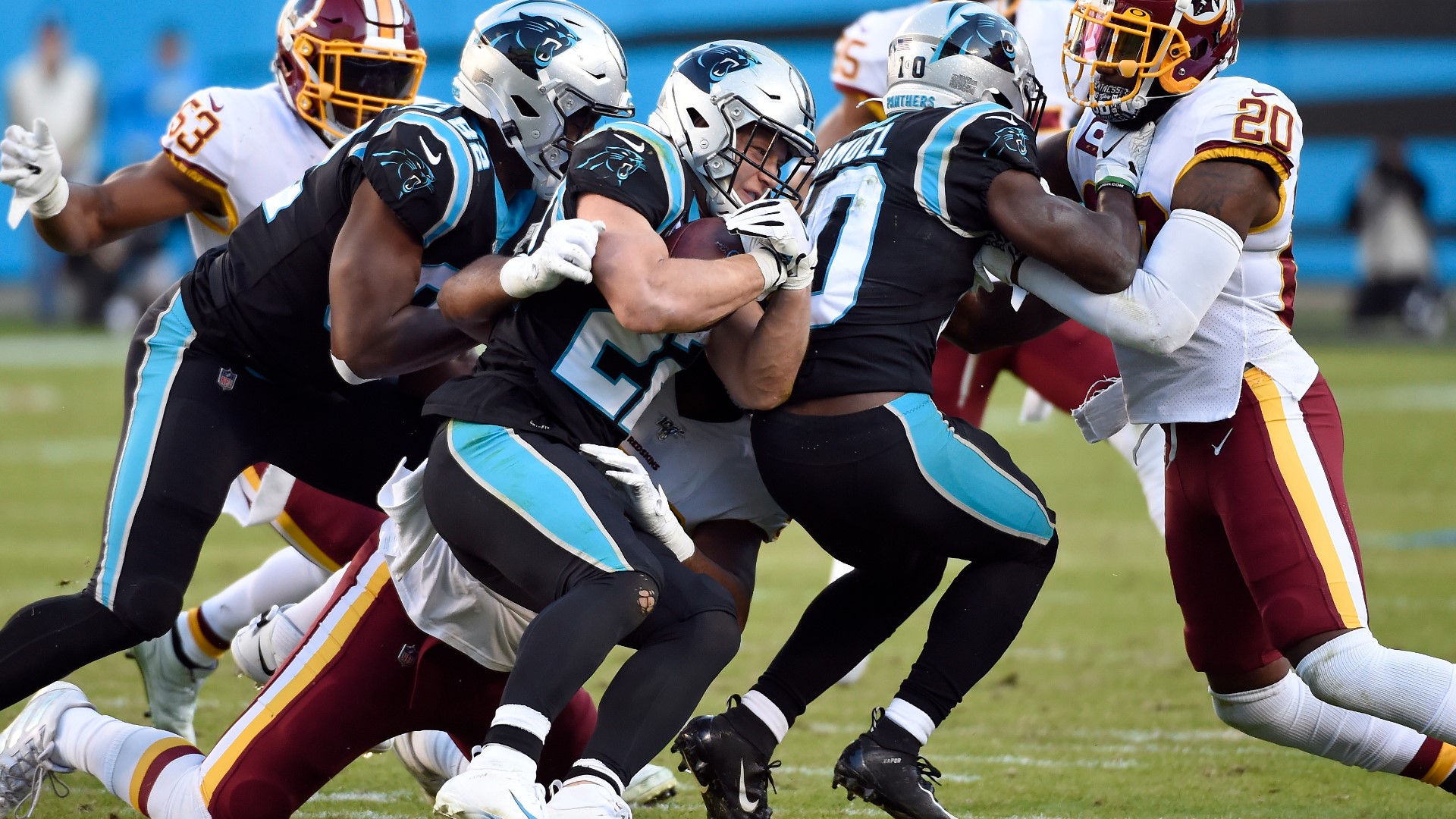 The Panthers, with most of their fans having exited the stadium, then perfectly executed an onside kick with Jermaine Carter recovering at the Carolina 48, giving Allen one more chance.

He moved the Panthers to the 1-yard line, but Washington stopped Carolina on four straight downs with Chris Odum sacking Allen after a 23-yard loss and Nate Orchard recovering the loose ball.

Both Odum and Orchard were signed to the active roster earlier this week.

Redskins linebacker Ryan Anderson was ejected after delivering a helmet-to-helmet hit on tight end Greg Olsen. The Panthers announced Olsen has entered the concussion protocol and he did not return. Olsen appeared to tuck his head while approaching contact when Anderson came flying in and hit him straight on with his helmet. Olsen remained on the field for about a minute after the hit and the crowd booed relentlessly as replays were shown on the scoreboard.

Redskins: Redskins returner Trey Quinn left the game in the second quarter with a concussion after taking a shot to the head from DeAndrew White while going low to field a punt. Quinn didn’t call for a fair catch, but White was flagged for a helmet-to-helmet hit. ... Right tackle Morgan Moses left the game with a back injury and linebacker Montez Sweat injured his quadriceps.

Panthers: Defensive tackle Gerald McCoy (ankle) and linebacker Brian Burns (back) missed portions of the game with injuries, but did return.

Redskins: Visit the Packers on Sunday.