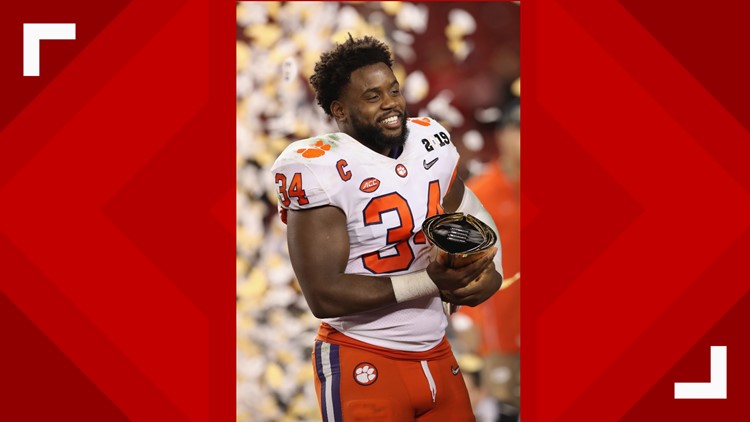 COLUMBIA, S.C. — There were a lot more calls made when the NFL Draft was over as a number of prospects received undrafted free agent contracts. Some Clemson and South Carolina products will get their shot to make an NFL roster.

Former USC offensive lineman Zack Bailey will be in Tampa Bay for camp. He signed with the Bucs on Saturday.

If you remember Zack suffered a broken leg late last season and that might have deterred teams from drafting him but the 2018 All-SEC Second team pick and former All-Freshmen team selection will have an opportunity to show his skill set.

The 6'6" 314 pounder out of Summerville can play all over the line and was USC's most experienced lineman.

The California native maybe out numbered in Oakland with a bevy of Clemson Tigers on the line but Keisean Nixon will have chance to compete for spot on the Raiders roster in his home state.

Keisean, a JUCO transfer, played in 12 games as junior and recorded two interceptions. He got his first start in USC's Outback Bowl win over Michigan and record a season best four tackles.

As a senior he made 11 starts in 12 regular season games and led USC with nine pass breakups. He was third on the team with 63 tackles as well.

Bryson Allen-Wlliams will join Keisean in rookie mini-camp. He signed with the Raiders on Sunday.

The fan favorite is another Gamecocks who has had to overcome injuries to get back to the playing field but he was one of the leaders of USC's defense and the team as he was recognized as one of the permanent team captains.

Last year he played in 9 games missing half the season with an ankle injury but returned to play in the Belk Bowl and was named the team's Comeback Player Of The Year.

The 6'8", 309 pound senior out of Virginia Beach gets a deal on the west coast to hopefully block for Phillip Rivers at some point.

Blake played in 40 career games at USC with 10 career starts. Every start was at right tackle and played six games at left tackle as a senior.

Albert waited his turn at Clemson and started in the College Football playoff when Dexter Lawrence was suspended and had six tackles. He posted 30 tackles as senior and made four starts in his career at Clemson and now he's headed to Houston.

Albert will reunite with his old teammate Deshaun Watson and Carlos Watkins on the defensive line.

Kendall Joseph was an All-ACC pick at linebacker as a senior and now he'll try to bring that success to the next level to the Kansas City Chiefs organization.

In that time Kendall amassed 8 sacks, 23.5 tackles for loss and 306 total tackles. Last season he posted 84 tackles and four sacks and was named third team All-ACC.

Another Tiger will be in Oakland. This time it's Hammond product Cannon Smith.

Cannon was mostly used a blocker and special teamer at Clemson but he showed that he can be a receiving threat at times. He finished his career with 8 catches for 83 yards and a touchdown.

Cannon's father, Bill, was a part of Clemson's 1981 national championship team as well.

Joseph won't be alone in his undrafted free agent journey because teammate Mark Fields will join him in KC.

In his last 20 outings he was able to defend 8 passes but he's been hampered by injuries during his time at Clemson.

If he's healthy he'll have to the chance to prove his recent performances at the NFL Combine and Senior Bowl are what NFL teams can expect.

Lamar made 14 starts last year and finished with 85 tackles and three sacks. He was a Butkus Award finalist as well.

Lamar made 22 starts in 39 career games and he'll join teammate Austin Bryant, the Lions fourth round pick in Detroit.

How about another Clemson reunion on the west coast? Trevion gets a chance to play with Mike Williams and Artavis Scott as a part of the Chargers.

The versatile Thompson was similar to Scott and Armai Rogers at Clemson. He played in 56 games and totaled 506 yards on 53 catches and two scores.

There were a lot of mouths to feed in Clemson's offense but he showed enough in front of scouts to get enough attention and Clemson has a reputation for producing top notch wide receivers. Deandre Hopkins and Sammy Watkins come to mind.

The Cowboys may have gotten a steal on the undrafted free agent market if Mitch Hyatt sticks.

In 2018 Mitch was named first team All-America and was recognized as the ACC's top blocker by earning back to back Jacobs Blocking trophies which goes to the top blocking in the conference voted on by the league's coaches.

In 58 career games at Clemson he made 57 starts.