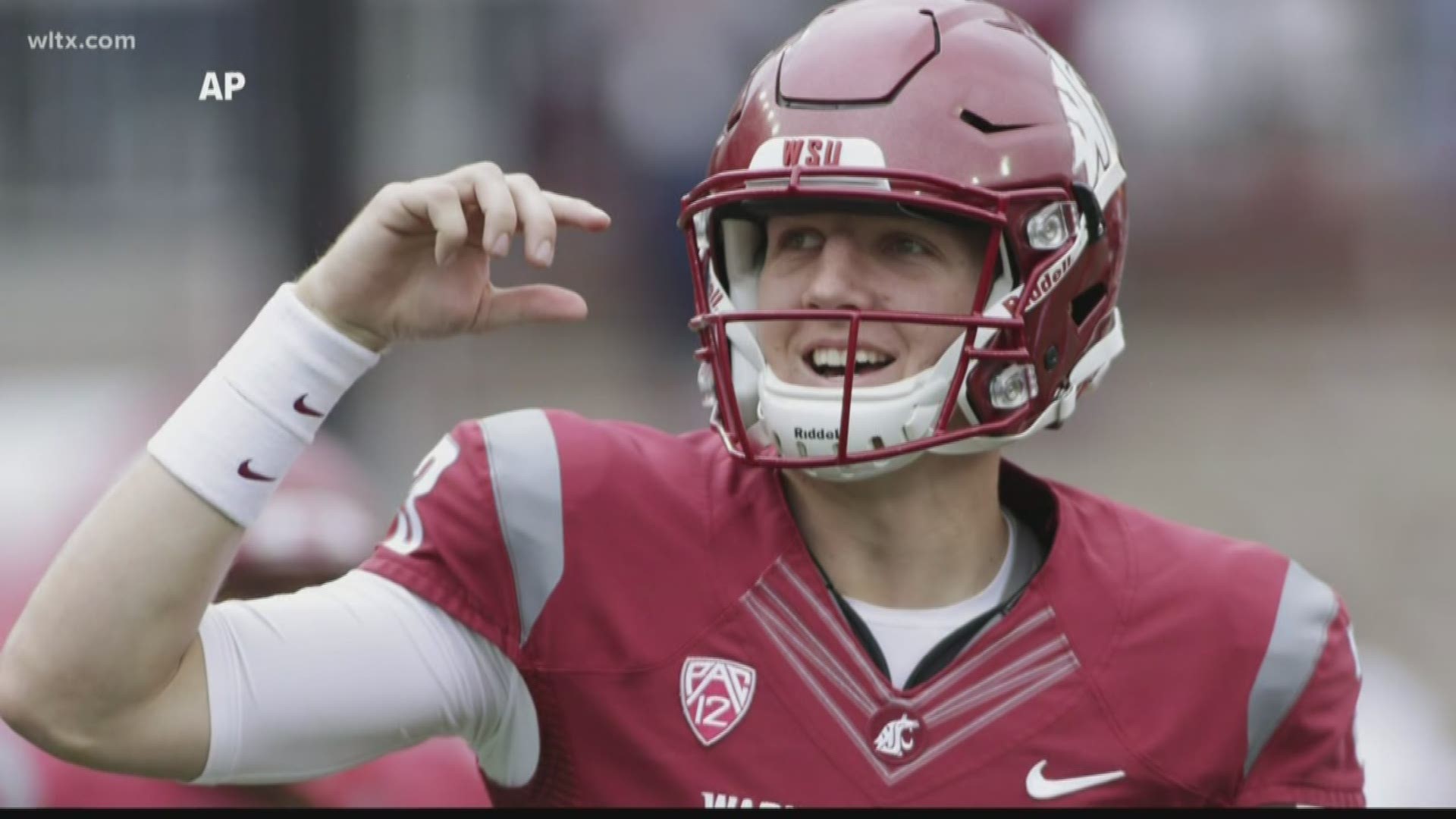 COLUMBIA, S.C. — One Gamecock family has turned a tragedy into an opportunity to help raise awareness for mental health for student athletes.

Ryan Hilinski is the starting quarterback for the South Carolina Gamecocks. Football is a sport that runs deep through his family's blood.

Mark Hilinski and his wife Kym have raised their three sons, Kelly, Tyler, and Ryan in California.

Mark says football and sports mean a lot to the family.

"It really came down on the sports side, they played a lot of baseball together and they play a lot of football together. In the town they grew up in in Claremont, California, it’s known for baseball and soccer," explained Mark. "Not particularly a football town necessarily although we have a great high school and so forth. Our boys really started to gravitate more towards football."

Growing up, they all three spent a lot of time practicing.

"I got to coach the kids when they were little. We went to all the games, Kym was the team mom," said Mark. "You support your guys and come to like the families and the players and coaches and stuff. They spent more time, this wasn’t just Saturday afternoons for a couple of hours. It was quarterback training, it was new relationships with different people in the sport and as they grew in stature, and they’re all relatively tall and big boys, they thought this might be something they’d like to do for a long time."

All three brothers have played quarterback at the college level. Kelly, the oldest, played at Weber State. Tyler, the middle child, played at Washington State. Ryan, the youngest, now plays at South Carolina.

The family spent a lot of their time watching each other and play the sport they love.

In January of 2018, tragedy struck. Tyler took his own life.

"Tyler was just the sweet, kind soul. He was just so good to us," said Kym. "We had no idea that Tyler was suffering. We say that he was most likely suffering in silence. No one saw any anxiety or depression and we realized if it could happen to Tyler, if Tyler could die by suicide, how many other people could this happen to?"

Tyler has been described as a leader by example. He was always the first one in and the last one to leave.

Mark says he nor Tyler's family, friends or teammates ever saw it coming.

Later on, Kym and Kelly had an idea while they were at a hotel in Pullman, Washington, where Washington State University is located.

"(Kelly) has this quote on his Twitter page and it says, ‘They say you die twice. Once when you take your last breath and then once when someone says your name for the last time.’ Kelly said, ‘I’m not going to let my brother die twice,’" said Kym.

At that moment, the Hilinski family started an organization dedicated to providing resources for mental wellness for student athletes. It's called Hilinski's Hope.

"Really what we’re focusing on right now is raising awareness and trying to eradicate the stigma and fund programs for student athletes that provide them with tools to support their mental wellness,” said Kym.

Since then, the family sold everything they had in California to move to South Carolina. Ryan was an early commit to the Gamecocks and Mark, Kym and Kelly all moved to the east coast.

"People are so kind and so nice to us and send us so many messages of well wishes and love and support," explained Kym. "It feels like we’ve been here for more than just eight months.”

Ryan took over the reigns of the starting quarterback for South Carolina during the second week of the season. Ryan put up three touchdowns of his own against Charleston Southern this past Saturday.

Over the past weekend, the Hilinski family overheard people talking about an idea to bring more awareness to mental health and athletes when South Carolina takes on Alabama this Saturday.

"The idea was in order to sort of draw attention to mental health in sports, the entire stadium would stand and hold three fingers in the air at the beginning of the Third Quarter in solidarity that we're here for each other. That we recognize this problem isn't going away," said Mark.

Mark believes this is a great way to show love to the student athletes at the game and across the nation.

"Those are thing things you hope for because we're not going to sit here and solve all the problems for sure. We're just trying to be the catalyst," said Mark. "What a great way to knock down stigmas to sit there and say I understand what happened and I understand what happened to the Hilinski's family but to so many great people in this country and in the state of South Carolina."

With all the attention being brought to mental wellness with student athletes, Kym says she can still feel Tyler's spirit around them.

"I like to think that he’s still shining, that he’s still here bringing his light and his goodness to this world and directing us and helping us to try and do good things,” said Kym.