Shane Beamer is a familiar face to Gamecock fans as he help build the team that went on to historic glory. 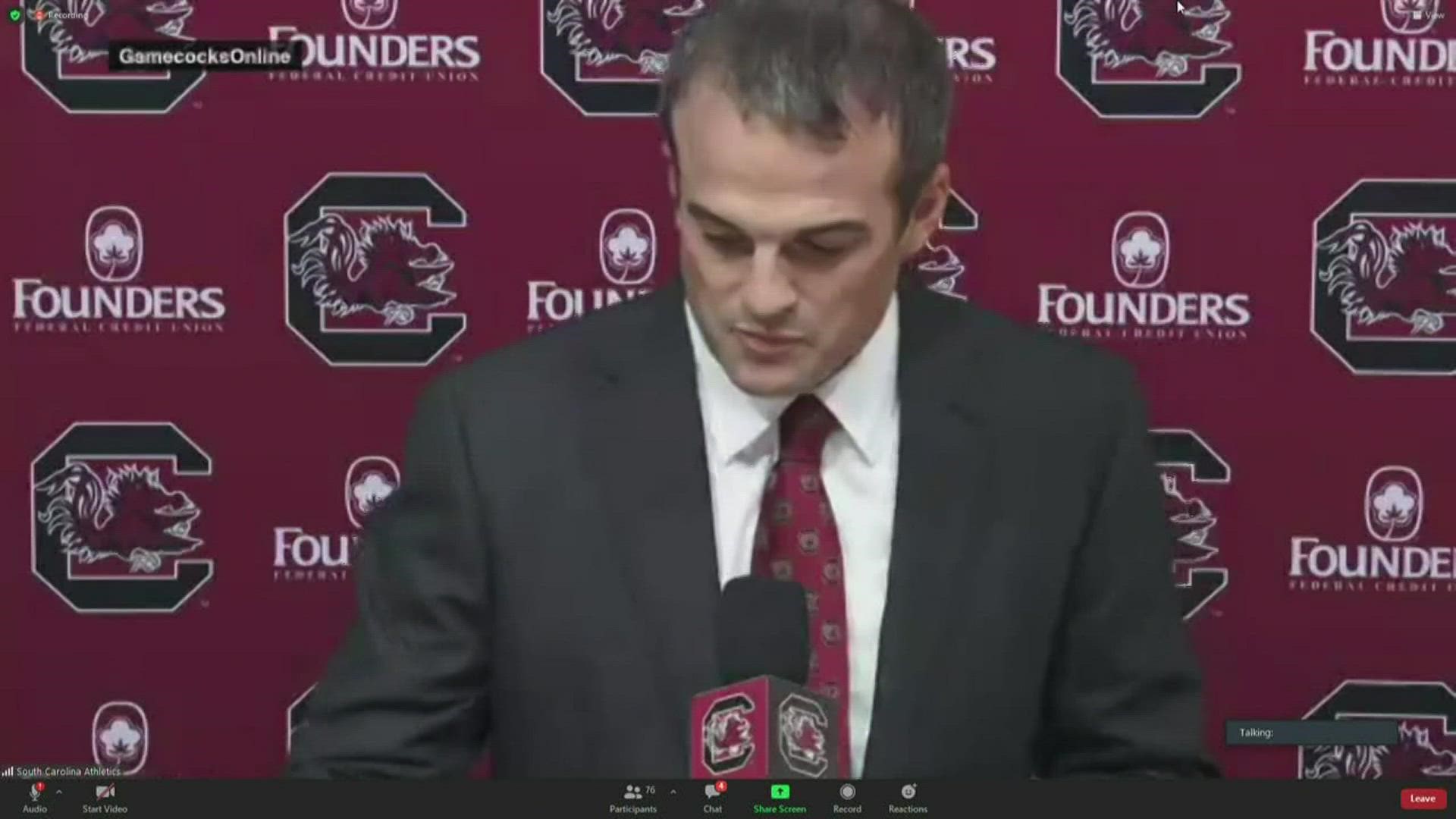 COLUMBIA, S.C. — New South Carolina Gamecocks coach Shane Beamer says he's ready to make the Gamecocks a team that's elite and that all fans can be proud of.

"Today is an absolute dream come true," he said in a news conference Monday as he was introduced as the team's leader.

Beamer said he'd been working toward the moment of becoming a head coach, and said had always thought of coming back to South Carolina, where'd he been an assistant before.

"This is a dream job for me because you have everything to win here at South Carolina," he said, pointing to the facilities and the fan base.

Beamer is the son of legendary Virginia Tech Coach Frank Beamer, and was born in Charleston, South Carolina when his dad was an assistant coach at The Citadel in the late 70s. Roughly a decade later, his dad's Virginia Tech team played the Gamecocks in Columbia, and Beamer recalled being impressed by the atmosphere of Williams-Brice Stadium all those years ago as a little boy.

"The atmosphere here, the electricity, the passion of the crowd is second to none," he said. "I can't wait to run out to '2001' and 'Sandstorm.'"

Beamer officially was announced as the 36th coach in team history Sunday, but reports had leaked out the night before that he'd secured the position. On Sunday afternoon, Beamer arrived at an airport in Columbia on the athletics department team jet, where he was greeted by Tanner and immediately taken to the team's operations center.

The program released photos showing Beamer meeting with the players for the first time later in the afternoon. Beamer told the players that he wanted integrity and to earn their trust.

And Beamer has made one staffing move: News19 learned Sunday night that defensive coordinator Tavaris Robinson, who'd coached the defense since 2016, would not be retained. When asked Monday, he did not confirm that move, saying that he'd had private discussions with coaches. He did say he wanted to keep some coaches but did not get specific.

Beamer, who's currently an assistant at Oklahoma, said he will stay on through the Sooners' final regular season games and the Big 12 Championship. However, he will be making decisions for South Carolina that entire time, including recruiting.

Beamer will be tasked with reviving a program that has suffered through two straight losing seasons, disappointing fans and boosters alike. Last month, the team fired Will Muschamp as coach with three games remaining on the season, with Tanner saying the decision to move in another direction came down to wins.

"We want a winner, and Shane Beamer is that coach," South Carolina President Bob Caslen said before Beamer was introduced.

And for Tanner, he believes he's found the perfect person to lead the program back to its high point that began a decade ago, as Beamer was one of that era's architects.

"He's prepared for this day to become our coach and lead us to heights to which we aspire," Tanner said. "We have found the man to lead our football program."

Back in 2007, Beamer was hired as an assistant for then coach Steve Spurrier. He became recruiting coordinator from 2009-2010. During his tenure, he helped bring in players such as Alshon Jeffrey, Melvin Ingram, Marcus Lattimore, and Connor Shaw--stars who would go on to lead the program to its first SEC Eastern Division title followed by three straight season of 11 wins, a program record.

Lattimore became the all-time rushing touchdown leader while Shaw is the all-time leader in wins by a quarterback.

His 2009 recruiting class was ranked 12th-best by both Rivals and Scout, and the 2010 and 2011 classes were ranked in the Top 25.  During Beamer's tenure as recruiting coordinator at Carolina, nine of his signees were selected in the NFL draft. Those include first round selection Stephen Gilmore (Buffalo Bills) and second round selections Jeffery (Chicago Bears) and D.J. Swearinger (Houston Texans).

Terms of Beamer's contract haven't been released, and Tanner said that's because it had to be formally approved by the Board of Trustees, which may not happen for over a week.

Beamer, 43, has been an assistant coach at seven Football Bowl Subdivision schools for 21 seasons. During his career, he has coached in 17 bowl games, including a College Football Playoff National Championship Game, has posted 18 non-losing seasons, six of those with double-digit victories and his teams have won 62.5 percent of its games.

It’s good to be home! pic.twitter.com/af2dei2Fh6