The Gamecocks' offense sputtered against the Tigers, whose receivers dominated in the contest. 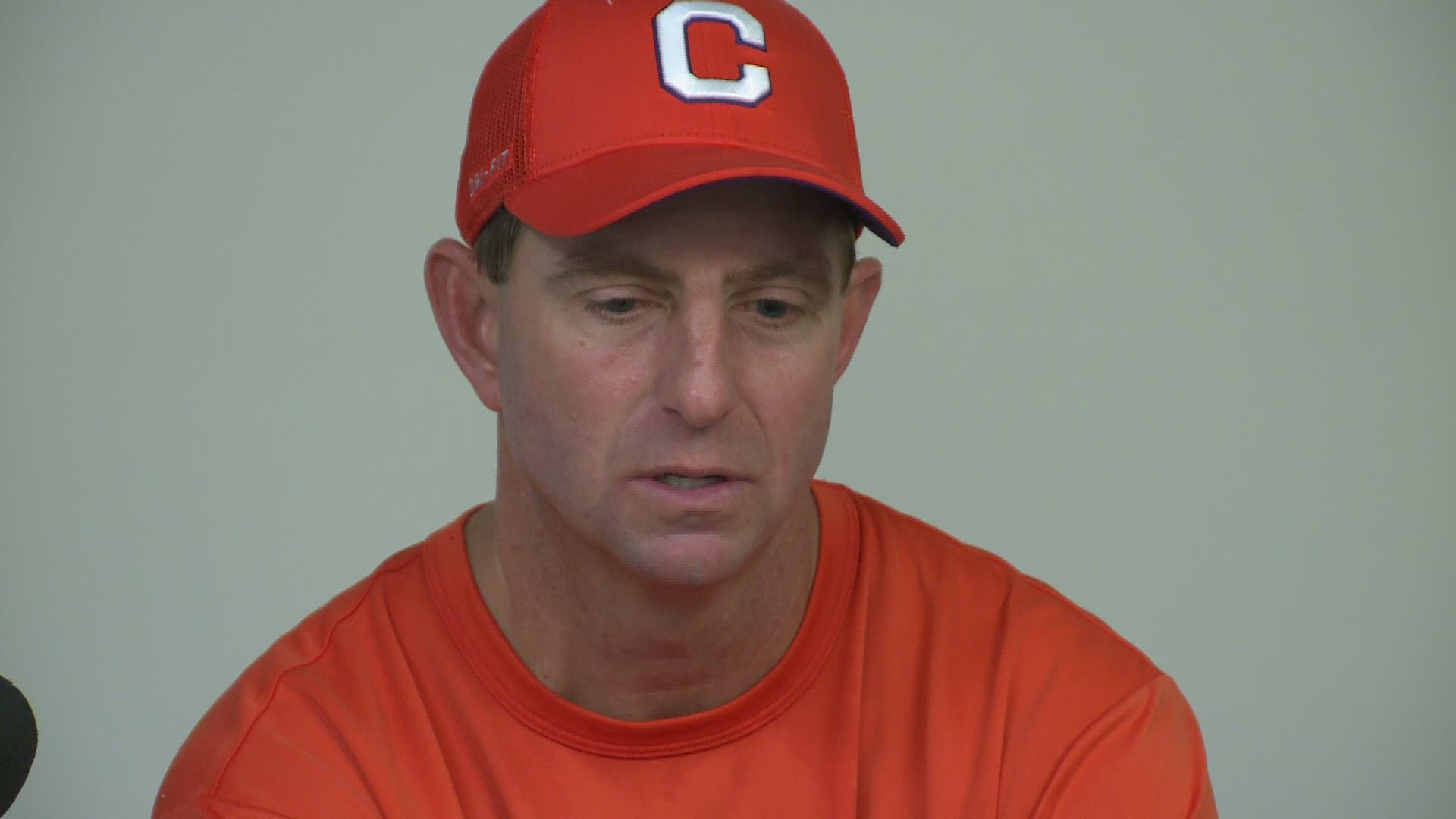 COLUMBIA, S.C. — Trevor Lawrence threw for 295 yards and three touchdowns to lead No. 3 Clemson to its 27th straight victory and second consecutive 12-0 regular season with a 38-3 victory over rival South Carolina on Saturday.

Travis Etienne ran for two touchdowns to break Atlantic Coast Conference marks for career touchdowns (57) and rushing scores (53) as the Tigers dominated throughout on the way to a sixth straight win over South Carolina (4-8).

Lawrence had touchdown throws of 10 and 65 yards to Tee Higgins and of 16 yards to Justyn Ross. He completed 25 of 35 throws — tying an Atlantic Coast Conference single-game mark with 18 straight at one point — before coming out in the fourth quarter.

Clemson coach Dabo Swinney said no matter the record coming in, his players were going to be ready to extend their hold on the rivalry. "Our program and our team takes pride in these type of games and every single game," he said.

Lawrence also had 66 yards rushing to lead Clemson (No. 3 CFP), which will attempt to become the first program to win five straight league championship games when it meets Virginia next week in Charlotte, North Carolina.

Clemson's defense did its part in the beatdown, holding the Gamecocks to 174 yards and continuing a run where the Tigers have limited all 12 opponents this year to less than 300 yards of total offense.

South Carolina's defense showed some fight very early, stuffing Etienne for no gain on fourth-and-goal at the 1 on Clemson's first drive. Four plays later, though, Ryan Hilinski threw an interception to Derion Kendrick to set up the first score and Clemson's rout was on.

Lawrence connected with Higgins on a 10-yard score on a perfectly placed over the shoulder throw.

Higgins was on the other end of another beautiful Lawrence TD pass from 65-yards out.

Lawrence and the Tigers benefited from a couple of official reviews. On the first, Justyn Ross' 33-yard catch after he was pushed out of bounds and returned was upheld when South Carolina challenged the call. Then Ross' catch, initially ruled caught out of bounds, was overturned for a 16-yard scoring pass as his backfoot touched turf before going out.

South Carolina, which gained 600 yards a year ago in this game, struggled to make anything against Clemson's front-line defense. The Gamecocks finished with 99 yards overall the first 30 minutes and their only score was Parker White's 39-yard field in the second quarter.

It was South Carolina's fewest points scored against Clemson in 30 years since a 45-0 shutout loss in 1989.

Gamecocks coach Will Muschamp did not want to list the things he believes caused his team to struggle, saying it would sound like excuses. "The bottom line is we weren't productive and we need to get better," he said.

Clemson: The Tigers continued their progress toward the College Football Playoff since its lone close-call two months ago at North Carolina. Lawrence, Etienne, Higgins and Ross are as potent an offense quartet as there in the game while linebacker Isaiah Simmons and safeties K'Von Wallace and Tanner Muse lead a defense that doesn't get beat for big plays.

South Carolina: The Gamecocks will have plenty of time to stew over a lost season, with what coach Will Muschamp would call his deepest and most talented team. Instead, South Carolina squandered second-half leads in losses to North Carolina, Florida and Tennessee and could not mount any offense the past month with only two touchdowns in the third- and fourth quarters of the past five games.

Clemson takes on Virginia in the ACC Championship game in Charlotte, North Carolina on Saturday night.

South Carolina's season is over.

Here is the scoring summary and key plays from the game.

With that last score, Clemson's Travis Etienne now has 53 career rushing touchdowns, which is a new ACC record.

Tigers score on first drive of the second half

Tigers close the half with a field goal

Clemson got the ball back with less than two minutes to go, and took advantage, driving far enough to get in field goal range, where Clemson's B.T. Potter kicked a 46-yarder as time expired.

After a review, it's a Clemson touchdown

Clemson's Trevor Lawrence took a low snap and floated the football 16 yards to Justyn Ross for a catch. The referee ruled it an incomplete pass, saying it was out of bounds, but a replay determined Ross's foot did scrape the back of the endzone.

USC gets on the board

Ryan Hilinski led a balanced drive to start the second quarter, culminating in a 39-yard field goal by Parker White.

Clemson scores on a 65-yard bomb

Clemson's Trevor Lawrence hooked up with Tee Higgins for their second score of the game.

The Tigers next trip in the endzone ended in futility, as the Tigers couldn't get the ball in when they were right on the goal line.

After USC's Ryan Hilinkski threw an interception, Clemson's Trevor Lawrence tossed a 10 yard touchdown to wide receiver Tee Higgins for the first score of the game.

The final Gamecock walk of 2019 - Will Muschamp leads his players into Williams-Brice Stadium.