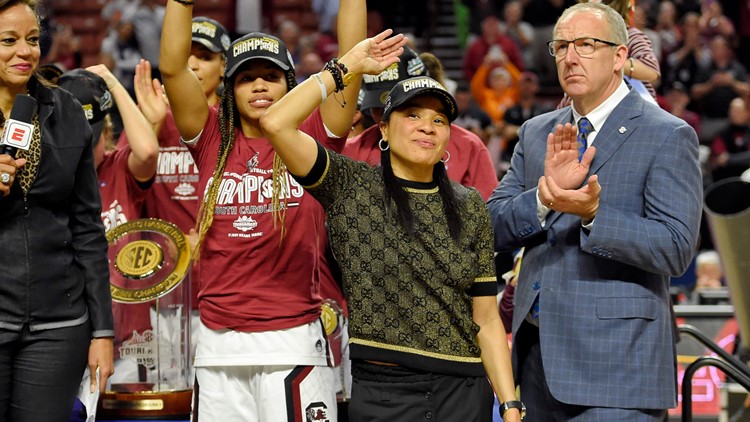 Head Coach Dawn Staley's squad now will see if, as expected, they'll end up as the top overall seed in the NCAA Tournament that begins later this month.

The Bulldogs, ranked 6th in the nation, did not looked like they were in the same class as South Carolina, which has been the number one team in the country for the last two months. Once again, it would be a combination of great defense and rebounding, fast-break points, and a major advantage in the paint that would lead the way for South Carolina, as a matchup against the two best teams in the league turned into a laugher.

Mississippi State struggled with slow starts in the tournament and that happened again Sunday against the nation's top team . The Bulldogs started the game 1-8 from the field, settling for unset shots against the Gamecocks' robust defense. They'd shoot just 22 percent from the field in the first half.

Early on, it was USC's Brea Beal who set the tone offensively, punctuated by a three point play from a bucket and a foul with 3:30 to go in the first quarter.

USC would add to that lead. Early in the second, Destanni Henderson got around Mississippi State's defense for an easy layup, making it 26-13 and forcing the Bulldogs to call a time out.

Mississippi State's frustration did point over just before the half, when the Bulldogs' Yemiyah Morris tried to slap a rebound away from the Gamecocks' Aliyah Boston. USC's Kirki Herbert-Harrigan stepped in and words were exchanged. Both Morris and Herbert-Harrigan would receive technical fouls.

Cooke would come out of the play with a nifty up and under hoop to give USC a 36-20 lead at that point.

USC would only add to that lead in the second half, before a late surge by Mississippi State trimmed the margin of victory a little.

The Gamecocks had a balanced scoring attack led by Herbert-Harrigan's 15 points, Beal's 12, and Zia Cooke's and Tyasha Harris with 10 a piece.  Herbert-Harrigan was named the most outstanding player of the tournament.

USC (32-1, 17-0 SEC) will now have to wait a while to determine where they'll play next. The selection show for woman's college basketball isn't for another eight days, on March 16.