Police said two cars involved in a shootout caused the incident, which also injured a woman who had attended the game and was outside the stadium when she was shot. 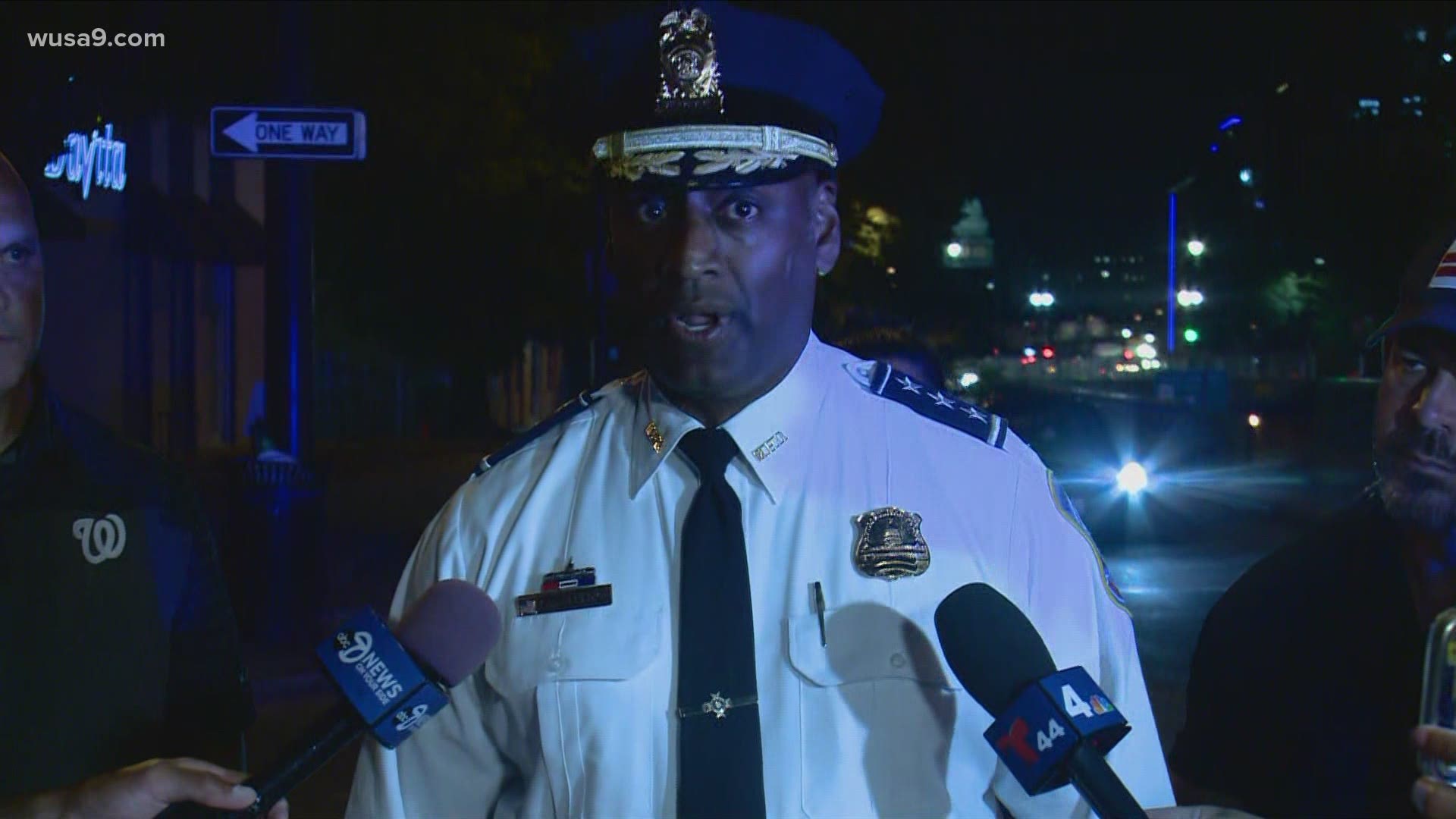 WASHINGTON — Three people were shot outside Nationals Park during Saturday's game against the San Diego Padres, DC Police said. Officials said one of the victims was a woman who had been attending the game and was caught in the crossfire of two vehicles involved in a shootout as she waited for an Uber driver to pick her up.

On Tuesday, D.C. Police did say they recovered a gray Toyota Corolla with a Virginia temporary tag that they believe was the second car that is part of the shooting.

The shooting happened in the 1500 block of South Capitol Street, Southwest, with one car pulling up beside another and "engaging in gunfire," police said. The cars sped down South Capitol Street, Executive Assistant Chief of Police Ashan Benedict said. One car was stopped by police, and two suspects from the car are receiving treatment for injuries at a hospital in the area, and being interviewed by police. Benedict described the suspects as "known by law enforcement."

The woman who had been attending the game is expected to recover from her injuries, according to Benedict.

Initially, DC Police tweeted that there were four people they thought were wounded in the shooting but later updated that number to only three injured by gunfire.

UPDATE >> DC Police Chief Contee says the car involved in the shooting outside of Nats Park has been *recovered* @WUSA9 pic.twitter.com/yDAjubCWQq

In videos from the ballpark on social media, fans can be seen running sporadically through the stadium's concourse after gunshots were heard. Players can also be seen exiting the field of play as some fans jumped over seats and rushed onto the field amid the commotion.

People leaving the stadium talked to WUSA9 reporters and said it was chaotic and terrifying as they heard gunshots echo in the park. People told WUSA9 they were carrying children out, holding one another and hiding from what they thought was a possible shooter inside of the stadium.

The Washington Nationals were in the middle of the game with the San Diego Padres when the shooting happened, but the game was postponed.

"We stand together against senseless acts of gun violence in the city we love. Gun violence – no matter where it occurs in our city – is unacceptable and will not be tolerated," said part of a joint statement between the Nationals and D.C. officials on Sunday. "The Metropolitan Police Department (MPD) continues to work closely with Nationals security to ensure the continued safety of residents, fans, workers and all individuals in the area."

Federal and local law enforcement are investigating the shooting outside of Nationals Park.

Anyone with information should call police at (202) 727-9099 or text your tip to the Department's tip line at 50411. Police are currently offering a reward of up to $10,000 to anyone who provides information that leads to the arrest and conviction of the person or persons responsible for a violent crime committed in D.C.

#Breaking: Most people have cleared @Nationals stadium after nearly 6 gunshots outside frightened fans and families inside @wusa9 pic.twitter.com/kfbMUfMXBo

The shooting comes only hours after Mayor Muriel Bowser and law enforcement officials held a news conference following a Friday night shooting in Southeast D.C. That shooting claimed the life of a 6-year-old girl and injured five other people.

Bowser was at the White House last Monday, joining President Biden and local leaders from around the country who are scrambling to deal with a surge in murders in a number of cities.

Credit: AP
Fans rush to evacuate after hearing gunfire, during a baseball game between the San Diego Padres and the Washington Nationals at Nationals Park in Washington on Saturday July 17, 2021. The game was suspended in the sixth inning after police said there was a shooting outside the stadium. (=John McDonnell/The Washington Post via AP)

The president said one key is stemming the flow of firearms used to commit violent crimes.

The D.C. Police Union said this is the earliest the city has recorded 100 homicides since 2003. Over the last decade, the city has, on average, hit the grim mark by Oct. 25. 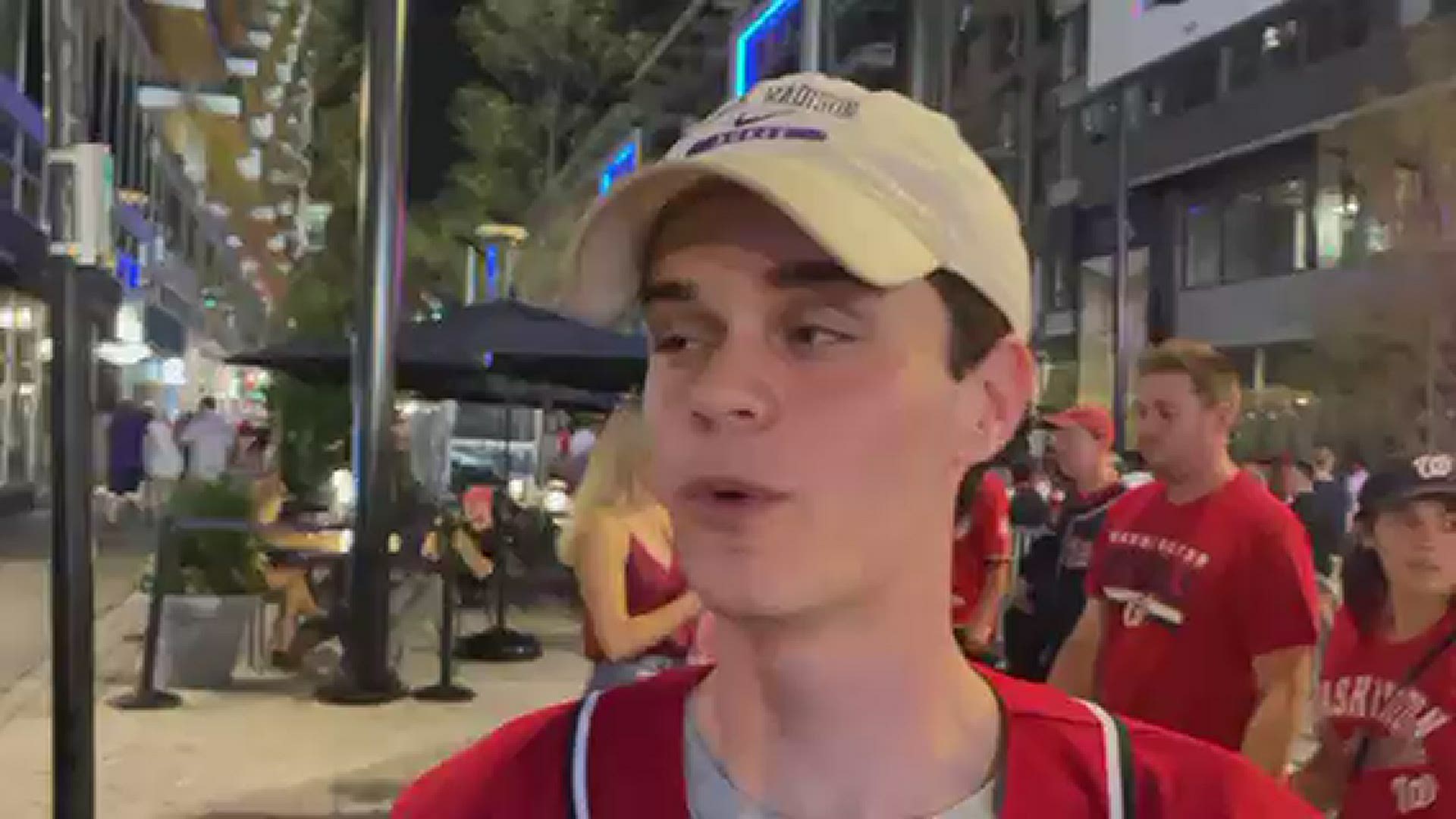 #Breaking: police and fire on scene of shooting on S.Capitol Street outside of @Nationals park @wusa9 @DCPoliceDept pic.twitter.com/2aqyryKDBe

The Washington Nationals also released a statement after the game that said:

“Tonight’s game has been suspended in the bottom of the 6th inning due to an incident surrounding Nationals Park. The suspended game will resume beginning at 1:05 PM ET and be completed as a nine-inning regulation game. Following the conclusion of the suspended game, the regularly scheduled game will begin within 25-45 minutes and will be played as a nine-inning regulation game. Tickets and parking passes for the regularly scheduled game may be used for admission to both of tomorrow’s games.”

Davey Martinez said it best—our fans are our family.

1 / 16
AP
Spectators take cover during a stoppage in play due to an incident near the ballpark during the sixth inning of a baseball game between the Washington Nationals and the San Diego Padres, Saturday, July 17, 2021, in Washington. (AP Photo/Nick Wass)

The San Diego Padres also tweeted, sharing that they are thinking of all of those who were affected.

Our thoughts are with everyone affected by the incident outside of Nationals Park. https://t.co/rcvIrSjfns

The Nationals and the District of Columbia released a joint statement Sunday afternoon about the shooting.

Joint Statement by the District of Columbia and the Washington Nationals pic.twitter.com/GyAzMFjd62

Padres shortstop Fernando Tatís Jr. tweeted as well, expressing gratitude for those who worked to ensure their safety during the incident.

Hope everyone is safe! Just keep the prayers up🙏🏾 thank you everyone that help in the front line ! God bless 🙏🏾