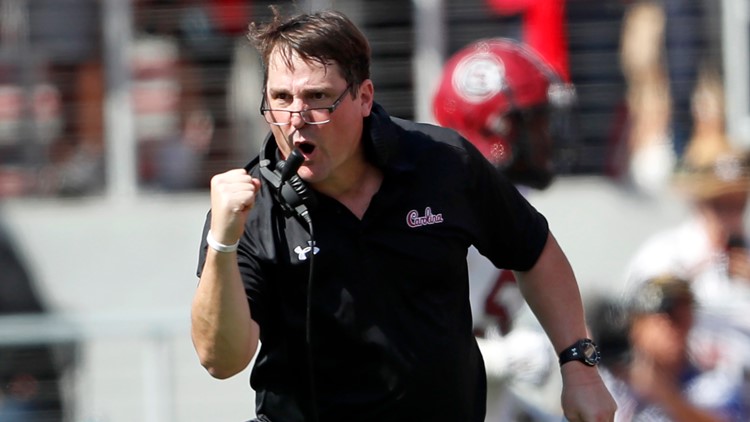 Photo by: John Bazemore/Associated Press
South Carolina head coach Will Muschamp reacts after his team returned an interception of a touchdown in the first half of an NCAA college football game against Georgia, Saturday, Oct. 12, 2019, in Athens, Ga. (AP Photo/John Bazemore)

“Coach Muschamp and his team pulled off what was arguably the biggest upset of the year to date,” said Jim Terry, chairman of the Bobby Dodd Coach of the Year Foundation.

RELATED: Gamecock defenders honored for their performances in Athens

RELATED: Mukuamu earns a national award after his 3-INT day in Athens

“It’s quite an accomplishment to go on the road into a hostile environment against a top-three team and win, especially after losing your starting quarterback. Coach Dodd would have admired his team’s perseverance to overcome so much adversity and secure a program-defining victory.”

The Dodd Trophy Coach of the Week award honors a football coach who led his team to a significant victory during the previous week, while also embodying the award’s three pillars of scholarship, leadership and integrity. The award also celebrates the legacy of the former Georgia Tech head football coach who was inducted into the Hall of Fame as a player and a coach. Dodd played quarterback at Tennessee and was the head coach at Georgia Tech from 1945-1966.

The Dodd Trophy
Congratulations to Coach will Muschamp - our Dodd Trophy Coach of the Week! Muschamp led Gamecock Football to an huge win Saturday over No. 4 Georgia in double OT! 🤙 📰 https://bit.ly/33zI44G

A panel consisting of all previous winners, national media, a member of the Dodd family and a College Football Hall of Fame member will identify the final list of potential recipients at the conclusion of the 2019 season. The winner of the 2019 Dodd Trophy will be announced in Atlanta during bowl week for this year’s College Football Playoff Semifinal at the Chick-fil-A Peach Bowl.

RELATED: Hootie & the Blowfish celebrate like crazy over USC's upset of Georgia