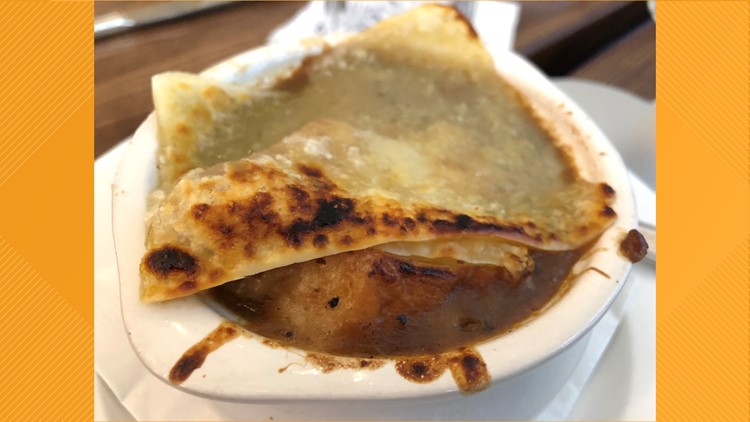 Photo by: 5 On Your Side
A bowl of French onion soup at the Union 30 restaurant in downtown St. Louis. The soup is a replica of the Famous-Barr version, with a few twists.

ST. LOUIS — Get into any discussion with a native St. Louisan about restaurants of yesteryear, and someone—inevitably—will bring up a department store. Yeah, sounds weird, but if you grew up in St. Louis it makes so much sense.

St. Louisans love to get nostalgic about Famous-Barr and its equally as famous French Onion Soup.

Ask anyone who lived in the city for any amount of time up until the mid-2000s and they’ll all have a memory of enjoying a bowl of the hot, cheesy brothy soup.

“It's funny because if you say the word French onion soup to someone, they immediately know what you're talking about,” Magdalene Linck said with a smile. She’s a researcher at the Missouri Historical Society Library and Research Center who knows her stuff about St. Louis’ fondness for the department store’s dish.

She also has her own memories.

“I ate it all the time growing up," Linck told Abby Llorico during an interview for the podcast 'Abby Eats St. Louis.' "Every time we were there, we probably had lunch. My dad worked downtown. My mother remembered getting it as a kid. My grandparents would take us there. So, it was very much part of my life until that place closed.”

Famous-Barr was sold to Macy’s in 2006 and with that the soup disappeared… until 2018—more on that in a moment.

But back to that feeling of nostalgia. Going to Famous-Barr and getting the French onion soup used to be an experience.

Famous-Barr’s French onion soup was so popular, they had soup stands within the store, so you could slurp while you shop. Imagine a soup so crave-worthy, so tasty, shoppers would eat it while browsing the aisles with their families.

Now, that’s a soup to long for. 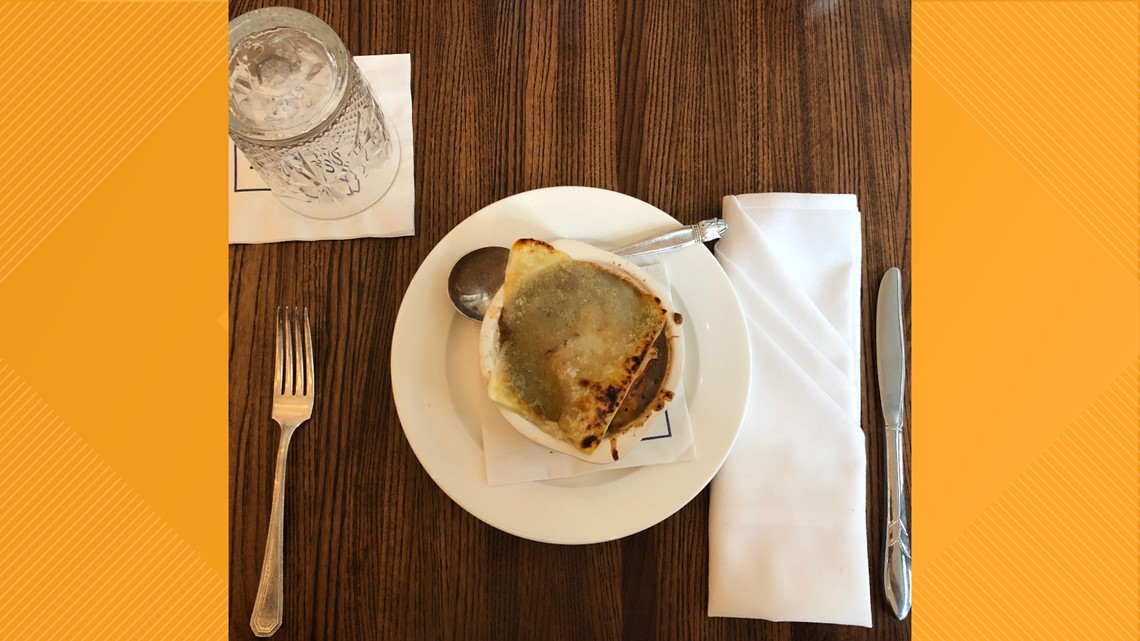 There are a lot of French onion soup recipes floating around St. Louis kitchens and recipe books, but the recipe was created by Manfred Zettl, an Austrian immigrant who became the executive chef of Famous-Barr’s food services at all locations.

And the reason locals still crave it is so St. Louis.

Unlike other French onion soup recipes, Zettl’s Famous-Barr version is heavy on the butter and flour.

“It has an incredibly large amount of flour and butter in it to make a roux and to thicken it. The recipe kind of almost reads like a gumbo recipe to some extent,” Linck explained. “So, this recipe starts out with 3 pounds of onions and 3 quarts of beef bouillon. That's 12 cups of beef stock. You're only ending up with an eight-cup recipe, which is kind of crazy that would reduce that much. So, of course it was very delicious.”

If all this talk of Famous-Barr’s French onion soup has you nostalgic, hungry or curious to give it a try, just know there is a place in St. Louis that’s still serving it up.

And it’s right across the street from the department store’s old flagship location in downtown St. Louis.

Chef Matthew Birkenmeier, aka Chef Birk, brought the recipe back from the brink of culinary extinction and into his kitchen at Union 30, the restaurant inside the new Hotel Saint Louis on Olive Street.

“It’s iconic,” he said of the dish and why he chose to add it to his menu.

Chef Birk took the famous recipe and added his own twists, but he guarantees you’ll still get the taste of the original.

“My twist is I make it just a touch on the thicker side. And then of course, I'm a smoking guy, so I had to add smoked prime rib to it, and it has the classic cheeses, but I put three cheeses in mine. So, besides just the mozzarella and the parmesan, I add gruyere, which is a nice, pungent swiss right on top. It's just all streaming and ooey and gooey and it's just, just perfect. It warms the soul on a cloudy day or a sunny day.”

For those who'd like to try the original, you can make the famous soup at home, thanks to a recipe Linck dug up in the St. Louis Post-Dispatch archives.

To hear more of our interviews with Chef Birk and Magdalene Linck, and get a hot, tasty history lesson on Famous-Barr's French onion soup, check out the latest episode of 'Abby Eats St. Louis'... now streaming for free wherever you get your podcasts.

Abby Llorico tells the story of St. Louis based on what’s on the table. From the hunger for local ingredients, to the booming brunch scene and the craving for creative cocktails, Abby dives into the nitty-gritty of how St. Louis grew to become the foodie town that it is.

Abby Eats St. Louis is available for free on all podcast apps. Take a listen to our latest episodes in the audio player above. We’ve also included links to some of the most popular podcast platforms below.

Make sure to subscribe to get the latest episode as soon as it drops.

Take a listen and let us know what you think! Have a topic idea or just want to send us your thoughts or comments? Email us at podcasts@ksdk.com.

And make sure to follow the Abby Eats St. Louis podcast on Instagram for more photos, videos and food inspiration.