Meteorologists are watching a disturbance that has a chance at becoming the next tropical storm of the 2020 Atlantic hurricane season. 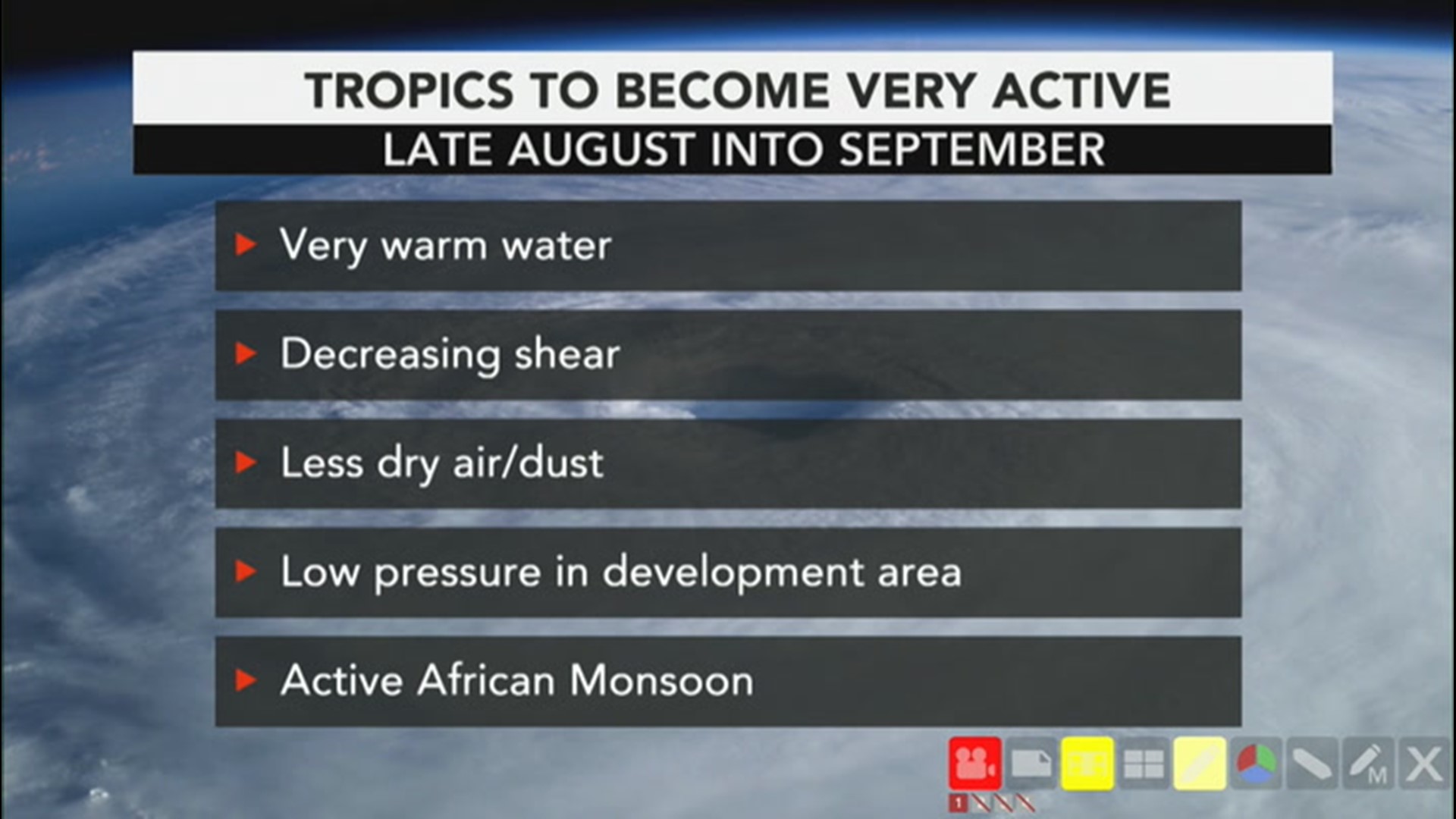 Josephine ended a brief lull in Atlantic tropical activity, as it developed and clinched a new Atlantic record on Thursday. However, the storm is expected to take a curved path well away from North America into next week. Now, meteorologists are watching a disturbance closer to home that was born from showers and thunderstorms over the southeastern United States -- and it has a chance at becoming the next tropical storm of the 2020 Atlantic hurricane season.

The feature, which the National Hurricane Center has dubbed Invest 96L, is moving away from the East Coast, so there's no threat of a landfall from a budding tropical storm. However, the organizing and strengthening system has already been playing a role in raising surf along the mid-Atlantic coast and is likely to do the same in southeastern New England this weekend.

"There is a high chance this disturbance evolves enough to become a tropical depression and tropical storm as it moves out to sea from this weekend to early next week," AccuWeather's top hurricane expert Dan Kottlowski said.

"The system will be over sufficiently warm water, and if it stays south of strong wind shear to the north, it can develop," Kottlowski added.

Rain directly from this system is not likely to fall on the Northeast. However, there are other non-tropical systems that will continue to instigate some weather trouble spots during the weekend. Showers over the lower part of the mid-Atlantic and Southeast states will be triggered by the same stalled weather pattern that has persisted much of this week. Meanwhile, a non-tropical storm at the jet stream level of the atmosphere could produce spotty showers in eastern New England on Saturday.

The circulation around the system off the East Coast could actually tend to drag drier air southward over part of the mid-Atlantic coast on Saturday and could prevent the rain dampening the South from spreading northward over New England on Sunday.

Since some of the flow of air is blowing in from the ocean, that landward breeze is helping to raise surf and cause slightly-above-normal tides from North Carolina to New Jersey and will continue to do so through Saturday. Tides can be a foot or two above normal, which can be enough to cause minor coastal flooding at times of high tide in some communities.

As the system drifts northeastward, seas and surf are likely to build along the southeastern New England coast this weekend, regardless of the official classification of the system. Forecasters urge bathers to be on the alert for increasing rip currents.

Small craft advisories were in effect along the East Coast from the Maryland and Delaware up through coastal Maine on Friday.

Steering winds should likely keep the system far enough away from Nova Scotia and Newfoundland to avoid direct impact, but a period of rough seas and surf could occur early next week in this part of Canada.

With Kyle as the next name on the list of storms for the Atlantic in 2020, if the system forms in the next several days, then it would set an early-season formation record for the letter "K." The current record belongs to the infamous Katrina from Aug. 24, 2005.

The 2020 Atlantic tropical cyclone season has already set seven early-season formation records starting with Cristobal in July and then six storms in a row from Edouard through Josephine. All of the last six storms previous early-season records were set during the notorious 2005 season that went on to bring Katrina and Wilma.

Most likely, 2020 will continue to set many more early-season formation records, and this year could be second only to the number of named storms set during the historic 2005 season, which generated a record 28 storms. Like the 2005 season, Greek letters, which are used when the seasonal list is exhausted could again be needed this year, forecasters warn.

Additional threats from the tropics will warrant a close eye from forecasters into the next week.

"In addition for the potential for a tropical system to develop from the train of tropical disturbances, known as tropical waves, moving westward from Africa, we will be keeping an eye on the Gulf of Mexico next week," Kottlowski said.

Following the name Kyle, the "L" storm for this year in the Atlantic is Laura. The early-season formation record for the "L" storm is Luis set on Aug. 29, 1995.

A feature similar to the disturbance along the Atlantic coast could set up over the Gulf of Mexico next week.

"During the latter part of next week, a tropical disturbance could evolve over the central to northern part of the Gulf of Mexico," added Kottlowski.

"We continue to expect a very busy time from late August through September and October and especially during the heart of the hurricane season in September, and there is some indication that we may continue to have named systems toward the end of the season," Kottlowski said.

AccuWeather is predicting up to 24 named tropical storms with nine to 11 of those expected to strengthen further into hurricanes this season in the Atlantic basin.