Tropical Storm Elsa to pass over Cuba, then into Florida

South Carolina is still included in the National Hurricane Center's cone of uncertainty. 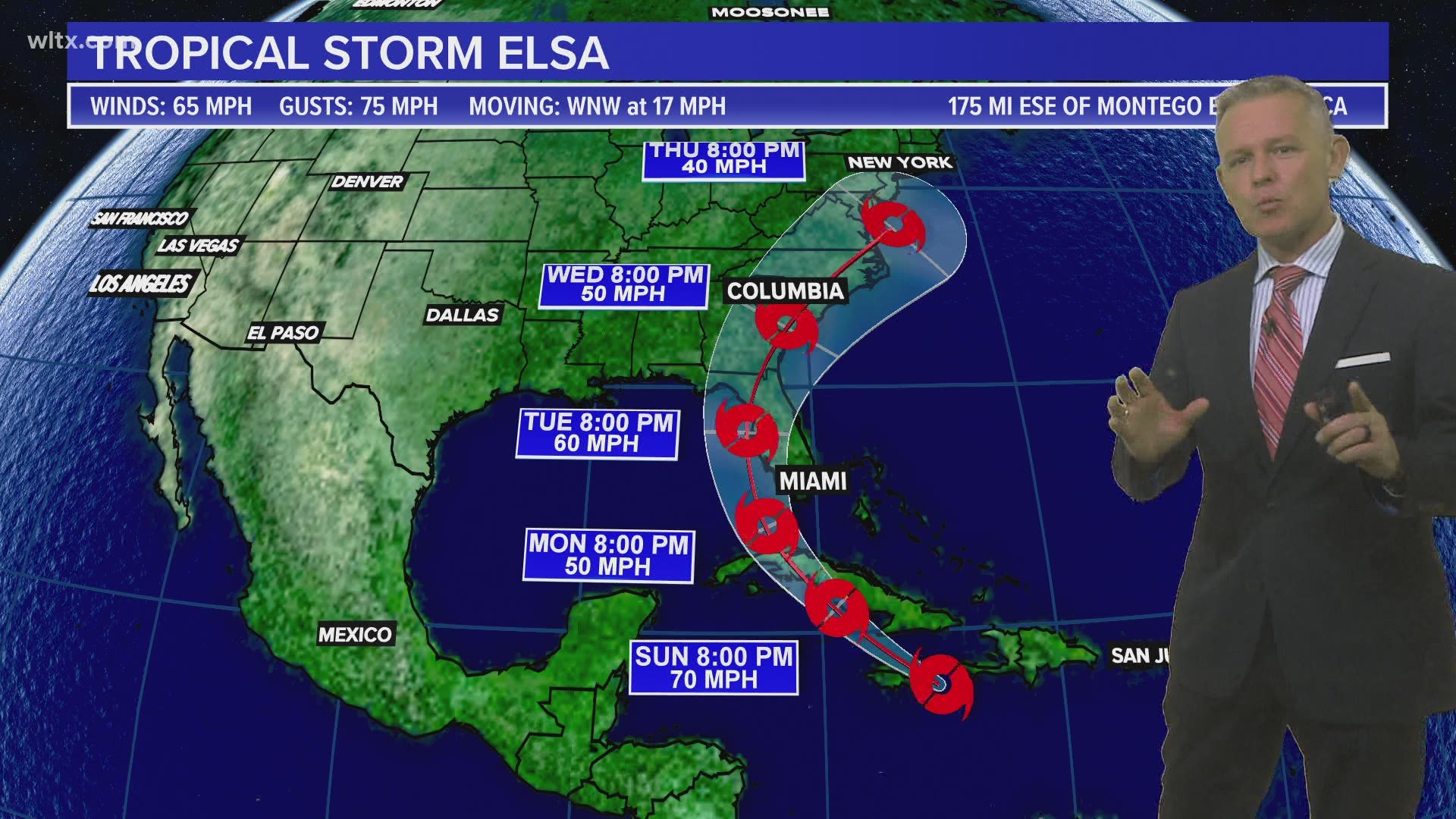 COLUMBIA, S.C. — Elsa was downgraded to at tropical storm early Saturday morning. The storm is still on a path that will track it across the Southeast U.S., with likely effects on South Carolina.

As of Saturday night, Elsa had sustained winds at 65 mph with some stronger gusts. Elsa has slowed down a little, but it was still moving quickly towards the west-northwest at 17 mph.

The latest forecast track from the National Hurricane Center has all of South Carolina in the cone of uncertainty, but it is too early to start talking about potential impacts in our state.

As far as weather advisories go, a combination of hurricane and tropical storm warnings have been issued for some of the islands of the Caribbean.

Tropical storm watches were issued Saturday afternoon for parts of the Florida Keys.

A hurricane warning means that hurricane conditions are expected somewhere within the warning area, in this case in the next few hours. Preparations to protect life and property should be rushed to completion.

A hurricane watch means that hurricane conditions are possible within the watch area.  A watch is typically issued 48 hours before the anticipated first occurrence of tropical storm force winds, conditions that make outside preparations difficult or dangerous.

Will this storm affect South Carolina?

Right now, it is too early to say.

The current forecast track has the storm moving across Cuba over the course of Sunday and into Monday. By Tuesday, it could be reaching the shores of the west coast of Florida. If this track holds up, the storm would then curve over the Florida peninsula, move inland up through eastern Georgia, and possibly into South Carolina.

However, there is still a lot of uncertainty about what happens after the next 48 hours. This forecast can and will change over the next several days.

The degree of land interaction with the mountainous islands of Hispaniola and Cuba will be a big factor in the future strength of Elsa at days 4 and 5.

Some intensification could occur according to some of the forecast models. The new NHC intensity forecast calls for some weakening in the first 48 hours and then shows intensification over the eastern Gulf of Mexico.

According to the National Hurricane Center, average track errors are 175 miles and 200 miles at days 4 and 5.  Given the larger-than-normal uncertainty and because hazards will extend well away from the center of the storm, people are urged to not focus on the exact forecast points.

This risk will spread northward along the Florida Peninsula through Wednesday and reach the coasts of Georgia and the Carolinas Wednesday and Thursday.

However, uncertainty in the forecast remains larger than usual due to Elsa's potential interaction with the islands of Hispaniola and Cuba.

Interests elsewhere in Florida and along the southeast U.S. coast should monitor Elsa's progress and updates to the forecast.

RELATED: South Carolina is back to drought free, officials say