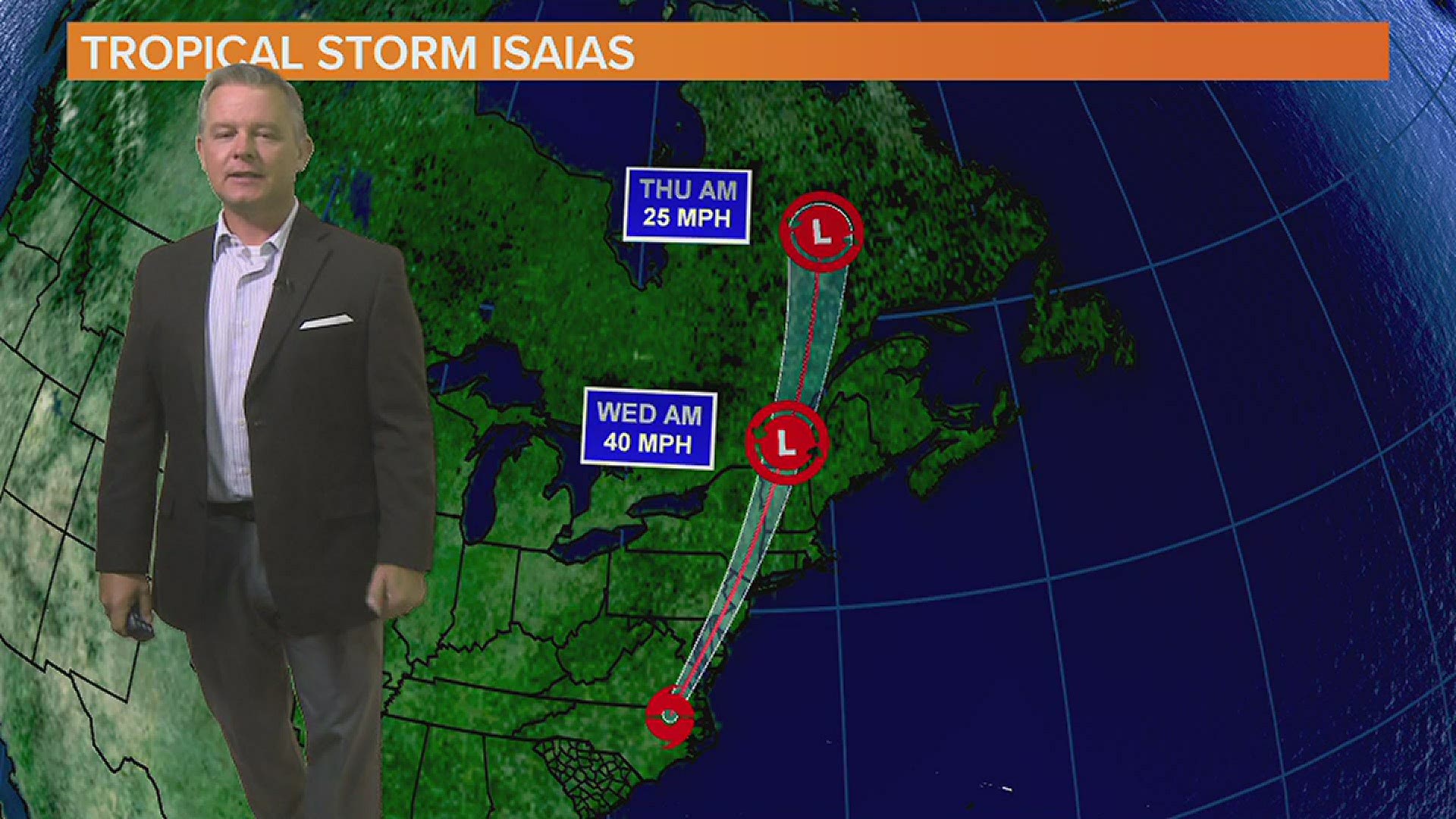 The National Weather Service confirmed the eyewall of the storm came ashore near Ocean Isle Beach around 11:10 p.m. Eastern. That's an area not far from the border between North and South Carolina. At that time, it had maximum sustained winds of 85 miles an hour.

Download the WLTX App Now for the latest updates

The storm surprised forecasters a little in the hours just before landfall, as it had a final jump in strength while approaching land. As of 5 p.m., it had winds of 70 MPH and was a tropical storm; by 9 p.m., it strengthened to those 85 MPH winds. That made Isaias a Category 1 on the Saffir-Simpson scale which measures hurricane intensity.

The storm also picked up forward speed before landfall and was moving at 22 MPH when it struck. It's expected to increase that speed over the next day moving through much of the East Coast states as it does. In preparation, tropical storm warnings are posted all the way up to Maine.  By Tuesday night it's expected to be in New York state, and by Wednesday, the remnants will be in northern Canada.

The storm began slowly approaching the state as the day began. Officials in downtown Charleston handed out sandbags and offered car space in elevated garages for residents of the low-lying city. As it turned out, that city largely missed the storm's wrath, and before sunset, people could be seen strolling Edisto Beach.

On Ocean Boulevard in Myrtle Beach, businesses like the Pier 14 Restaurant are tying down and packing up items ahead of the storm,"Anything that comes close enough to us is a concern because we are a pier," said Lucy Nicolai, the Pier 14 office manager. Her business closed for the day.

For the city, they weren't worried about structure damage, but even a few stiff winds could topple containers, so trash cans were removed from the beach. The city was also worried about storm surge, coastal flooding, flooding, and erosion.

In North Carolina, ferries wrapped up four days of evacuations from the Outer Banks' Okracoke Island, which took a beating last year from Hurricane Dorian.

Even further inland, the storm led to preparations. In Clarendon County, over 70 miles from the coast, the county prepared their shelters, even though they didn't think they'd need to use them.

Parts of South Carolina began seeing a clearing late Monday afternoon after getting bouts of occasionally heavy rains. In the Midlands, there were those isolated pockets of heavy precipitation, but by early Monday evening, all flash flood watches had been cancelled.

RELATED: The next few weeks will be more active in the Tropics

As for the rest of the Atlantic, the NHC is also watching this area in the middle of Atlantic, but the odds of further development with this system is 30% over the next five days.