As the storm tracks to our west early this week, rain and coastal flooding will be the main impacts for south Louisiana. 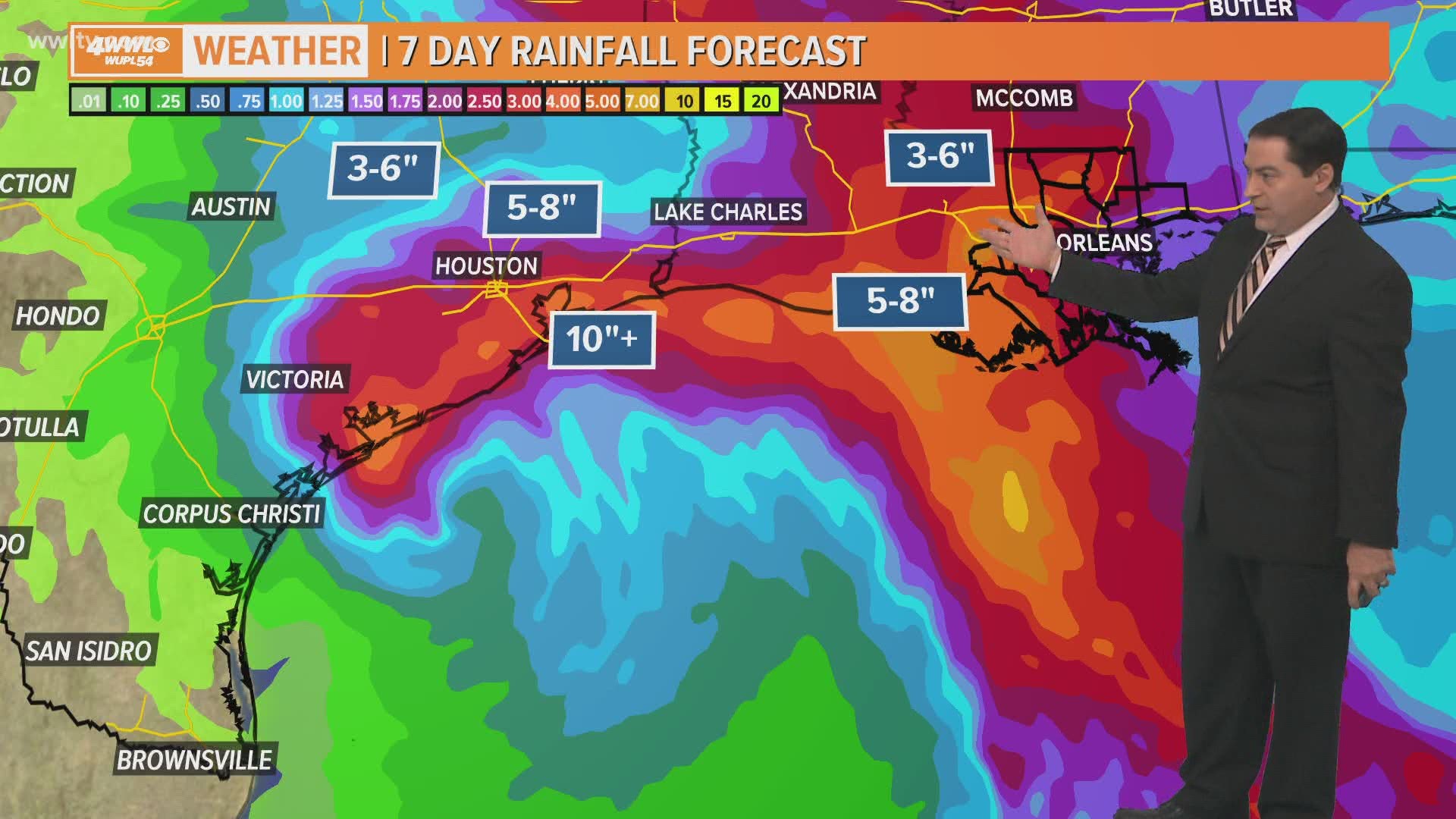 NEW ORLEANS — Tropical storm conditions were beginning Monday in parts of Texas and Louisiana as Tropical Storm Beta slowly works its way into a part of the country that's already been drenched and battered during a busy hurricane season.

The U.S. National Hurricane Center says Beta could bring up to 15 inches of rain and up to 5 feet of storm surge in some coastal communities. The heaviest rain from Beta is not expected to occur until late Monday into Tuesday.

If Beta makes landfall, it will be the ninth named storm to hit the continental U.S. in 2020, tying a record set in 1916.

Beta is moving slowly west at 6 mph. Winds are down to 50 mph.

Tropical Storm Beta continues to be poorly organized as it battles wind shear and dry air over the western Gulf of Mexico. Rain bands are moving across SE Louisiana and this will continue all day. Forecast models show Beta moving toward the central Texas Coast and making a landfall later today.

Then Beta is expected to turn NE and slowly move along the coast through Wednesday. It will weaken into a tropical depression and then a remnant low as it moves across western and north Louisiana Thursday into Friday.

Even though Beta is not making landfall in Louisiana we will have plenty of impacts. Beta will spread heavy rain, coastal flooding and windy conditions from TX to SE Louisiana.

Rain:
We will have feeder bands setting up over SE Louisiana the next 5+ days. This will send plenty of rain over the New Orleans area through then middle to end of next week. Forecast models all show that a band of rain will set up somewhere across SE to south-central Louisiana today into Wednesday. Where this band of rain sets up will likely have some flooding issues.

Right now rainfall totals will be around 4-6”+ across Metro New Orleans, but looks for 5-10”+ along the River to Bayou Parishes to the coast. As long as this falls over 5 days we could handle this amount, but some of it could happen in just a few hours with the rain band.

3+ feet for the eastern facing shores of SE LA

This will likely persist all week due to the strong winds and onshore flow.

Please stay weather aware all week. Check back for updates.

Hurricane Teddy is going to brush by Bermuda to the east today as a Cat. 2 hurricane. It will be picking up speed and moving north the next few days. It is expected to make landfall on Nova Scotia on Wednesday as a non-tropical low, but will have tropical storm to hurricane force winds. Tropical storm watches are in effect for Nova Scotia.

Lastly, what was Paulette could redevelop in the north Atlantic into a subtropical or tropical storm the next few days. It is moving to the east south of the Azores Islands.

► Track the tropics with live updates delivered directly to your phone. Text APP to 504-529-4444 to download the FREE WWL-TV News app now or find us in the iOS App Store or Google Play.

► Track the tropics, live updates from Your Local Weather Experts delivered directly to you throughout hurricane season by downloading the FREE WWL-TV News app now in the IOS App Store or Google Play.

New Orleans News from WWL - Apps on Google Play
Stay up-to-date with the latest news and weather in the New Orleans area on the all-new free WWL TV app. Our app features the latest breaking news that impacts you and your family, interactive weather and radar, and live video from our newscasts and local events.