A storm with the risk of a tornado prompted a tornado warning Thursday in Charlotte. Thankfully no damage was reported after the storm. 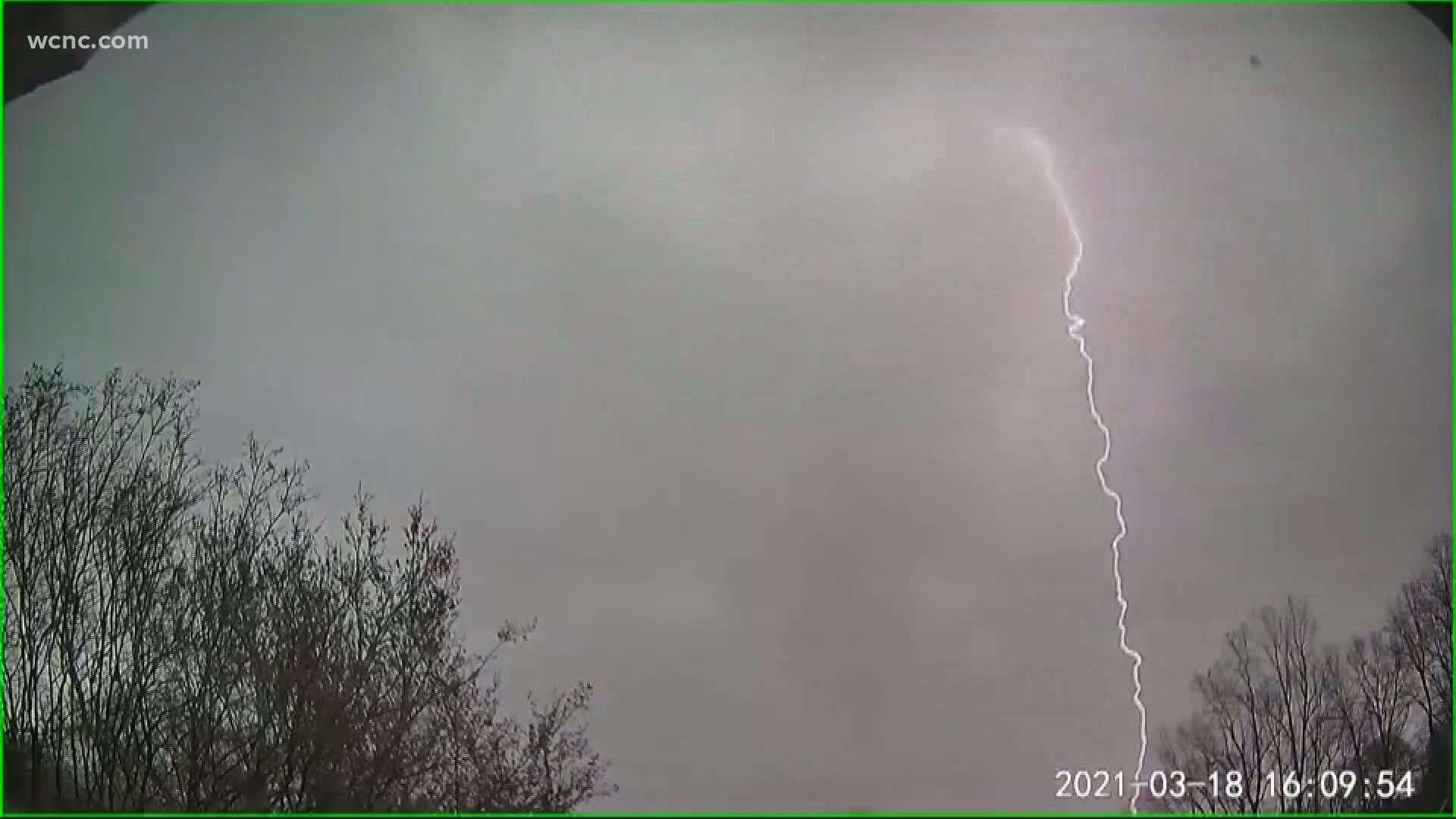 CHARLOTTE, N.C. — A rotating thunderstorm capable of producing a tornado prompted the National Weather Service to issue a tornado warning for Charlotte and surrounding Mecklenburg, York, Union, and Cabarrus counties Thursday. Luckily, despite the vivid radar signature and observed rotation, no damage was reported after the storm.

The warning, which came around 4:40 p.m., was the only tornado warning directly within the Charlotte metropolitan area Thursday.

The below video is from Thursday as Brad Panovich and the WCNC Charlotte First Warn Storm Team were tracking the tornado-warned thunderstorm over southern Mecklenburg County: 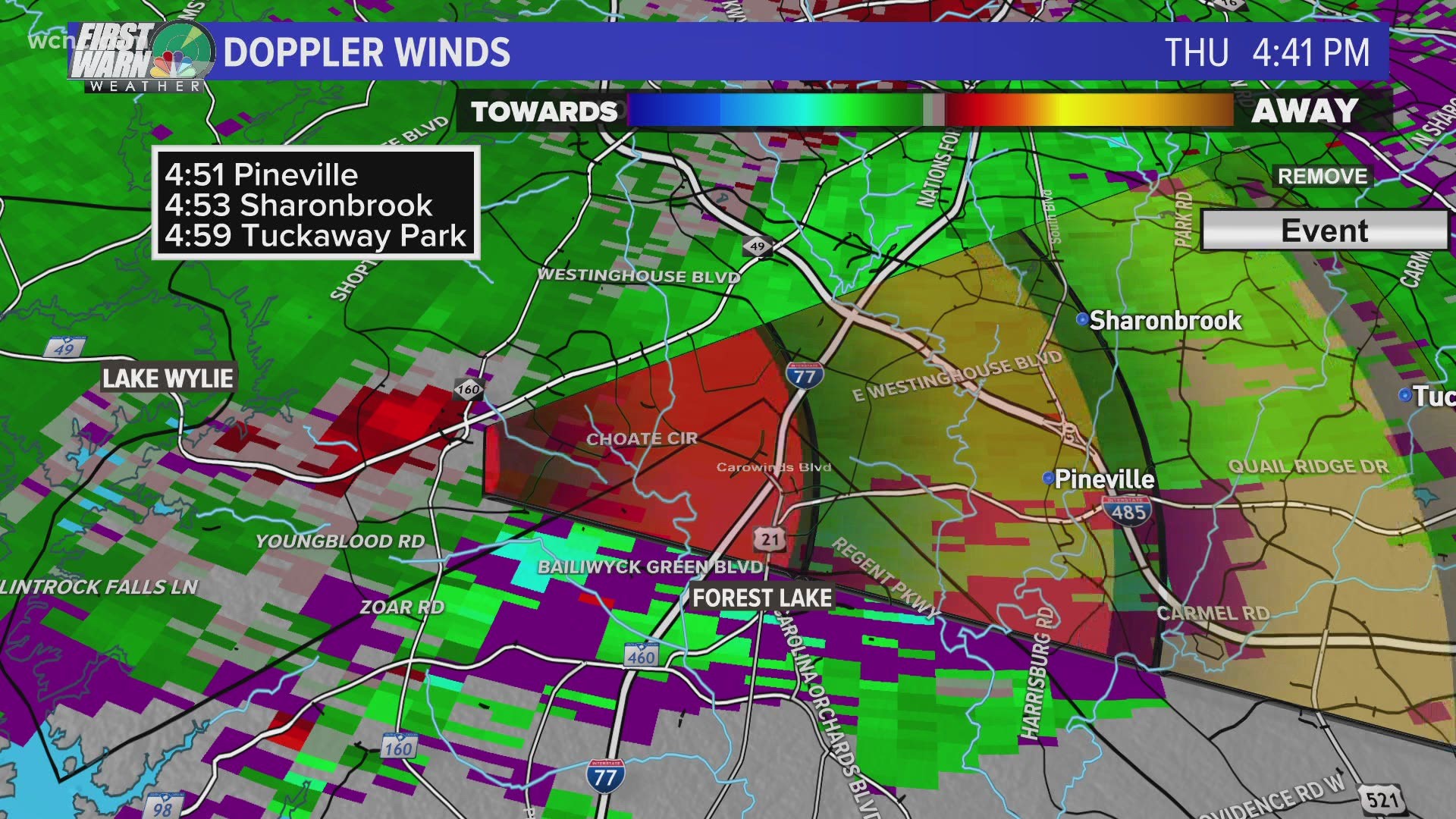 Below is the moment WCNC Charlotte Chief Meteorologist Brad Panovich, with the help of Bill McGinty, where using your photos to give "ground truth" to what was appearing on radar. Eyes on the ground allow meteorologists to confirm what radar is detecting above the ground in the atmosphere. 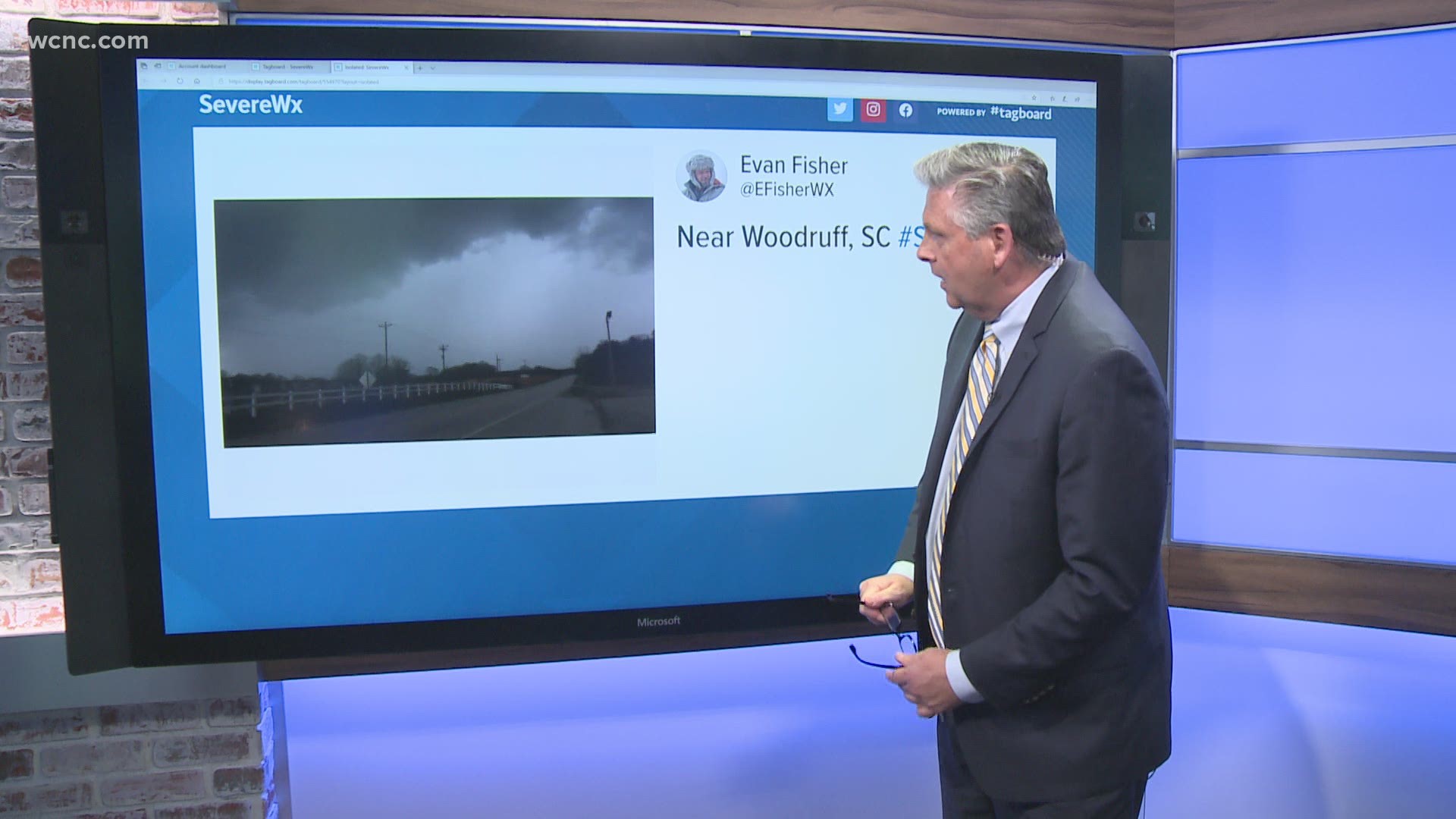 Later Thursday, Panovich verified a storm photo on social media. He explained the cloud in the photo, which was taken near Pineville during the tornado warning, was a photograph of a wall cloud and not a tornado.

That thunderstorm was part of a broken line of severe storms moving eastward across the Carolinas.

Other storms along the line produced hail and wind in western North Carolina and upstate South Carolina.

Jack Herring, a WCNC Charlotte viewer in the Myers Park neighborhood, sent a video of menacing clouds in the skies over the Queen City. 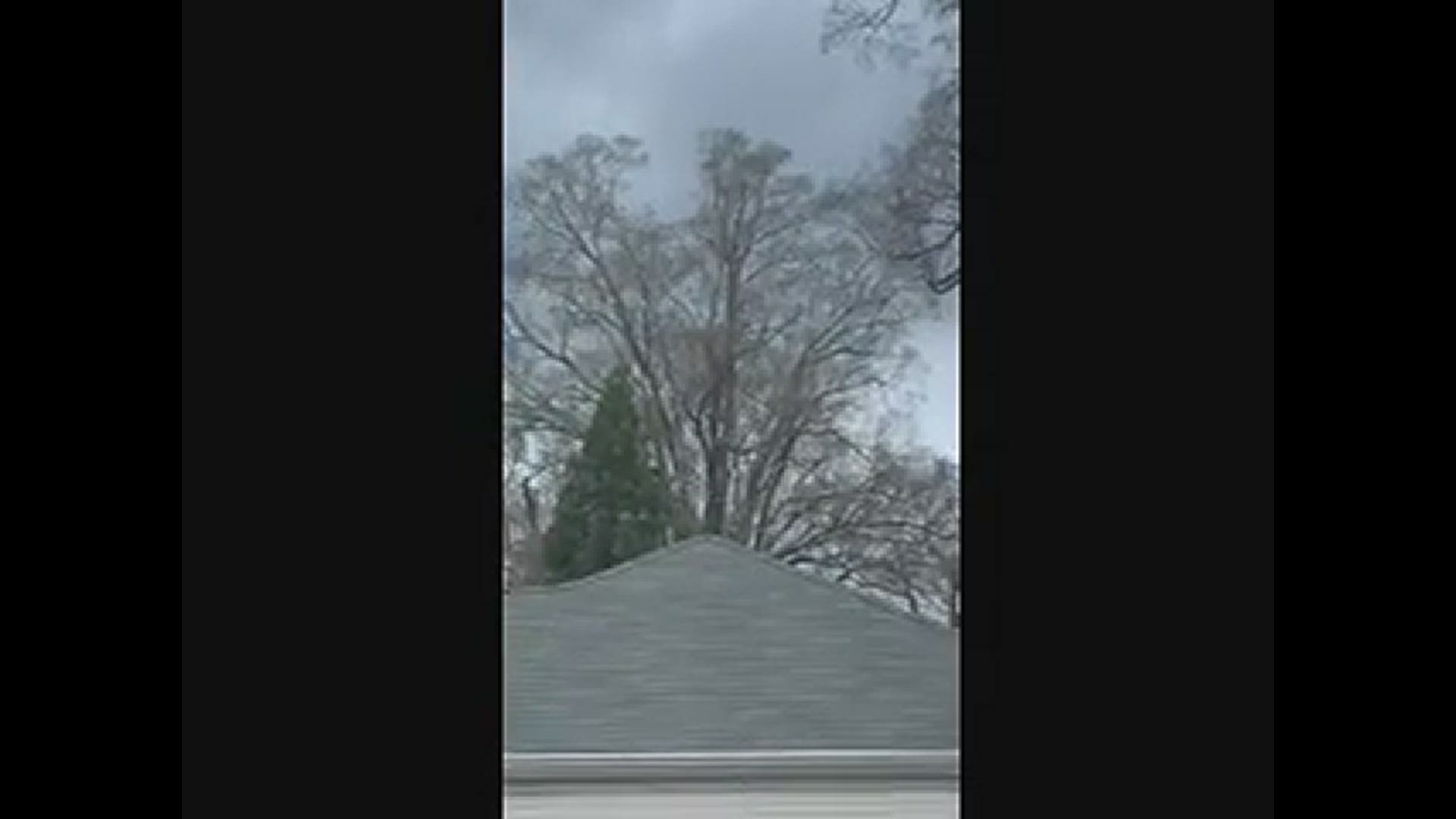 WCNC Charlotte viewer Jake Lackey shared a video of hail coming down in his backyard in Lincolnton, NC, with plenty of it hitting bushes, concrete, and the pool.

In Watauga County in North Carolina, a severe thunderstorm moving north of Boone produced hail upwards of an inch in Sugar Grove and Silverstone.

Video from Meat Camp, a community in Watauga County, showed hail piling up on a deck.

In South Carolina, York County sheriff's deputies alerted residents in Clover, South Carolina to downed power lines and a tree in a roadway. In a tweet sent out at 3:20 p.m., YCSO said the lines were down near Lawrence Road and Beamguard Road. A tree was also blocking part of the road, with power dark in the immediate area. The roadway was quickly cleared and reopened.

PHOTOS: The rainbow after the storm

Our WCNC Charlotte news team was out tracking the storms. Meteorologist Chris Mulcahy tracked the severe weather from inside the Chevy Storm Tracker. 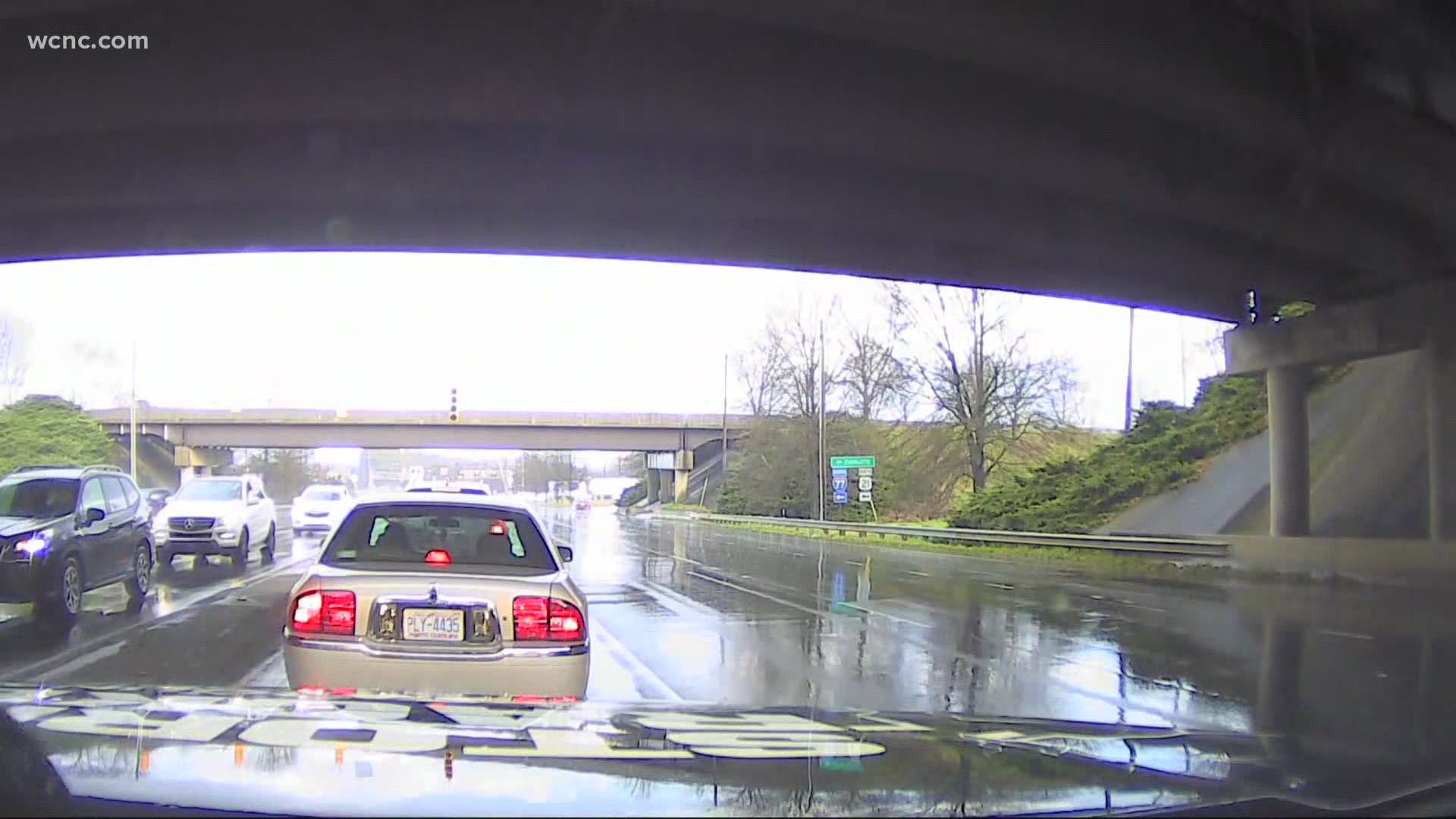 A warm, moist area moved into the Carolinas by Thursday midday. That warm air primed the atmosphere with "thunderstorm fuel" needed to make supercells, a powerful thunderstorm capable of becoming severe.

As a cold front then moved eastward across the Carolinas, it produced storms along the boundary between the warmer, moist air and the cooler air riding along the front.

Meteorologists expected a 5-10% chance of seeing a tornado in Charlotte and communities south and east. The probabilities increased the further south and east of Charlotte you traveled. These percentages are historically very high for the Carolinas.

Even the highest elevations, such as Boone and Blowing Rock, still have a 5% chance of seeing a tornado.

By comparison, a typical day has a tornado probability that is a fraction of a single percent.

Of all the forms of severe weather possible Thursday, it is damaging winds that are most likely to be observed on a widespread scale.

Thunderstorm winds are capable of producing damage similar to a tornado. If a Severe Thunderstorm Warning is issued, you should move indoors immediately.

And it's worth noting: rainfall and lightning are not requirements for Severe Thunderstorm Warnings. Any storm can produce damaging lightning regardless of whether or not it is warned. If you hear thunder, you're close enough to be struck by lightning and should seek shelter immediately.

Storms producing damaging hail, defined as hail one inch in size or larger, will prompt the National Weather Service to issue a Severe Thunderstorm Warning.

Hail causes over $1 billion in crop damage every year

Watches are issued when particular weather conditions, such as thunderstorms or tornadoes, are expected in the hours to follow.

The National Weather Service would issue Severe Thunderstorm Warnings and Tornado Warnings when life-threatening weather is occurring in real-time.

If you find yourself within a Tornado Warning, you'll want to:

Here's what to do once the Tornado Warning is cleared out:

How to receive severe weather alerts

The best way to prepare for severe weather Thursday is to be ready now. You can download the WCNC Charlotte Weather app on your phone to get real-time alerts from the weather team as we track the latest in the area.

You should also have a battery-powered NOAA weather radio set to alarm and portable chargers handy in case you lose power during severe weather.

Credit: WCNC
How to get severe weather warnings from WCNC

The WCNC Charlotte Weather team will also provide real-time alerts on social media, and we'll be live on-air and online if conditions get worse. You should also check in with family and friends regularly and let others know of any severe weather headed their way if they're not aware. 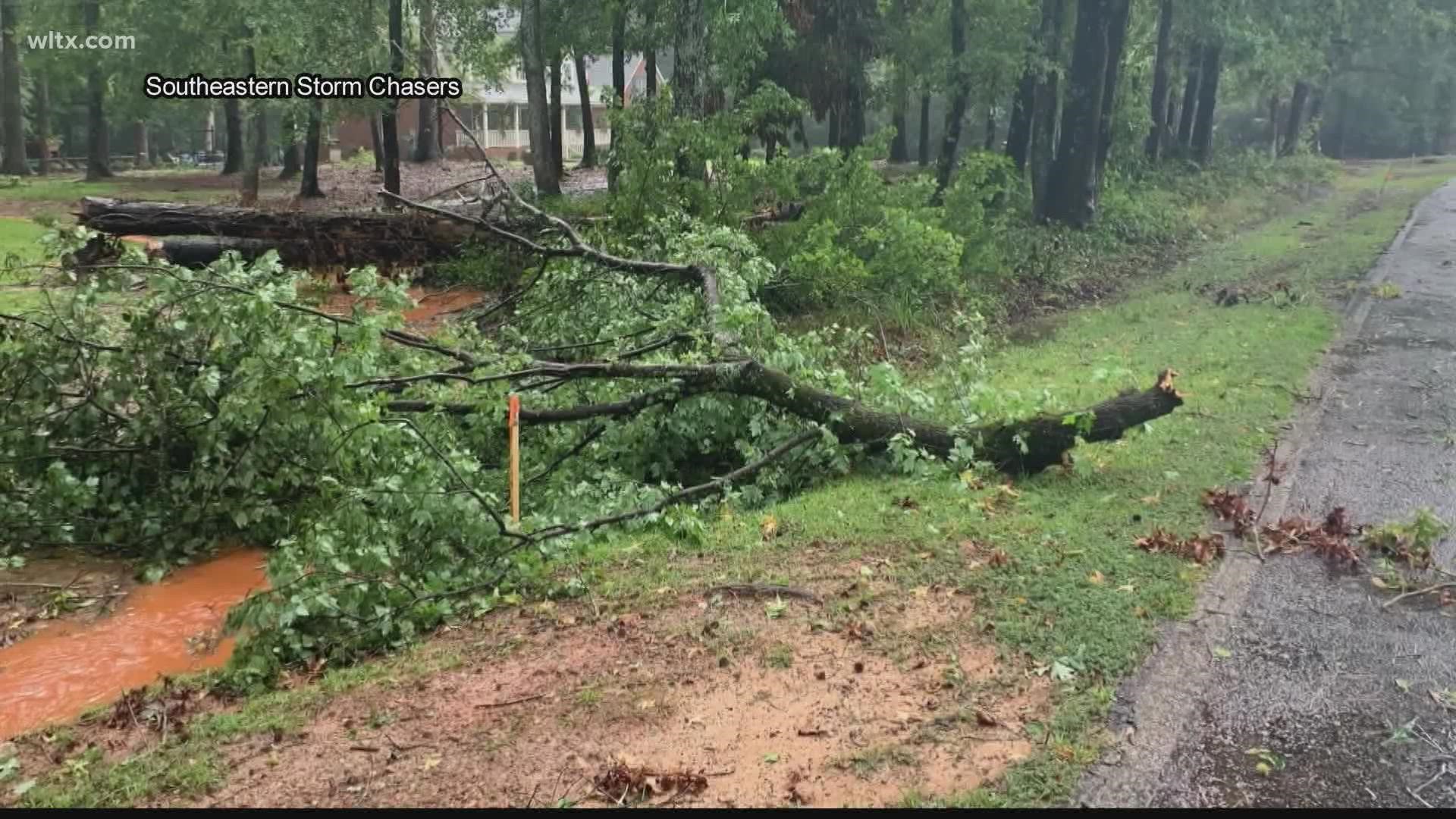