Zeta to regain hurricane strength, make a US landfall

The storm will become the 11th named storm to make landfall in the United States. 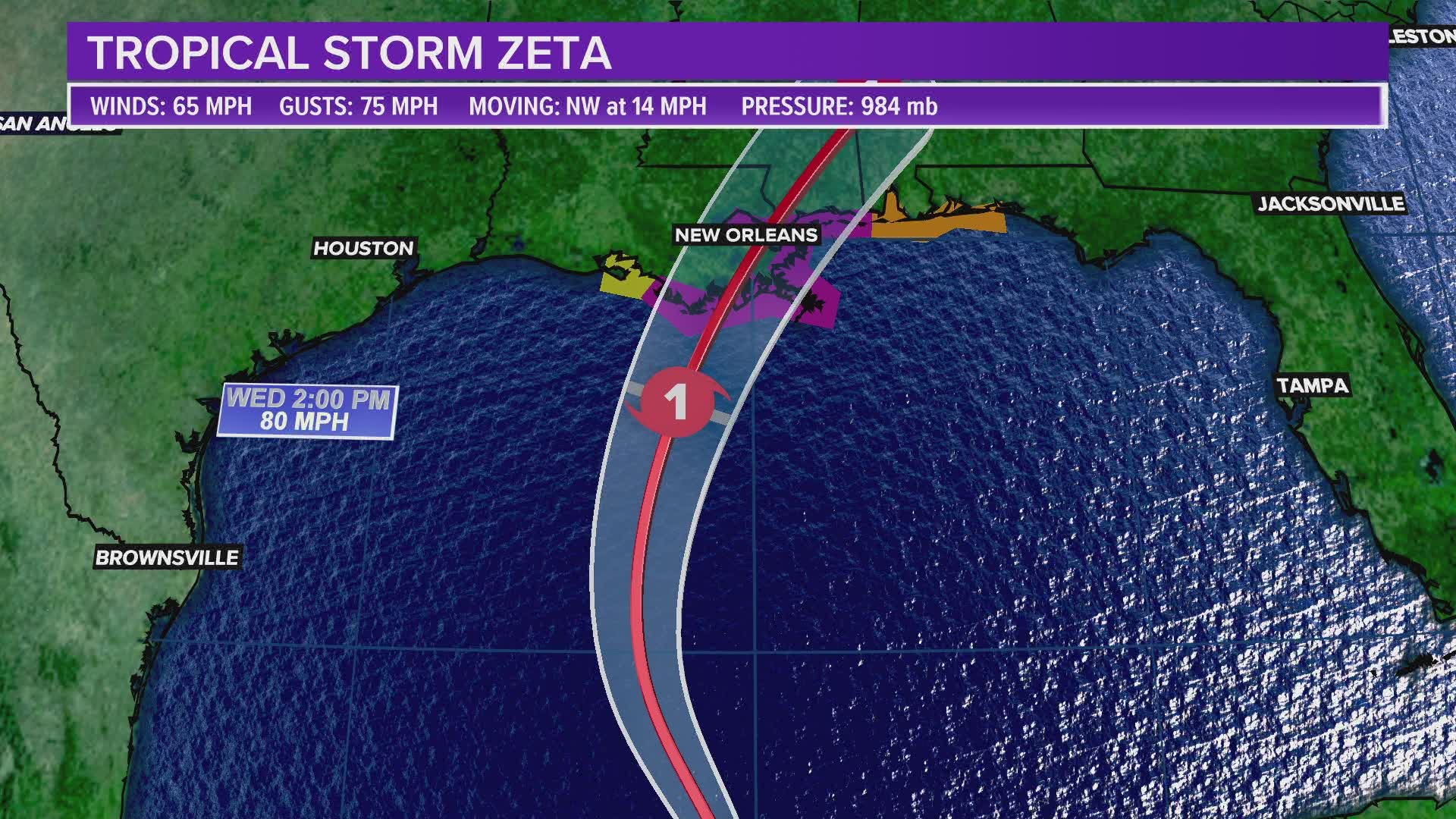 COLUMBIA, S.C. — Zeta became the 11th hurricane of the 2020 Atlantic hurricane season Monday. It has weakened, but it is forecast to become a hurricane again.

Tuesday evening, the storm had winds of 65 mph with higher gusts. The storm was moving northwest at 14 mph.

Hurricane conditions and life-threatening storm surge are possible along portions of the northern Gulf Coast on Wednesday and Thursday.

A storm surge warning is in effect for the Mouth of the Atchafalaya River to Navarre, Fla. This includes Lake Borgne, Lake Pontchartrain, Pensacola Bay and Mobile Bay.

A hurricane warning is in effect for Morgan City, La. to the Mississippi/Alabama border. This includes Lake Pontchartrain, Lake Maurepas and New Orleans.

A tropical storm warning is in effect for the Mississippi/Alabama border to Okaloosa/Walton County line in Florida.

A tropical storm watch is in effect for West of Morgan City to Intracoastal City La.

Residents in the watch and warning areas should follow any advice given by local officials.

Zeta will likely become the 11th named storm to strike the United States this year. This is a new record. The old record was nine named storms set in 1916.

It also could become the fifth named storm to make landfall in Louisiana this season.

Heavy rain is expected for the Upstate Thursday. Rain is expected to be less widespread with Zeta's current forecast path, but strong storms are still possible for the Midlands.

Damaging wind gusts and isolated tornadoes are the primary concerns Thursday as Zeta moves northeast. The timing would be between 6 AM and noon.

Even if we do not experience severe weather, it will be very windy Thursday. Winds will be out of the south at 20-30 mph with stronger gusts.

As the remnants of Zeta move away from the state, a cold front will cross the area. Some showers and storms will still be possible Thursday afternoon and Thursday evening in association with the front.

High pressure will build into the area late Thursday and early Friday. Friday and Saturday will be dry and cooler.

High temperatures Friday will be in the lower to middle 70s. Halloween will be even cooler with highs in the middle 60s.