A disturbance off the coast of Florida will enhance showers and thunderstorms across the Midlands on Tuesday. Localized flooding is possible. 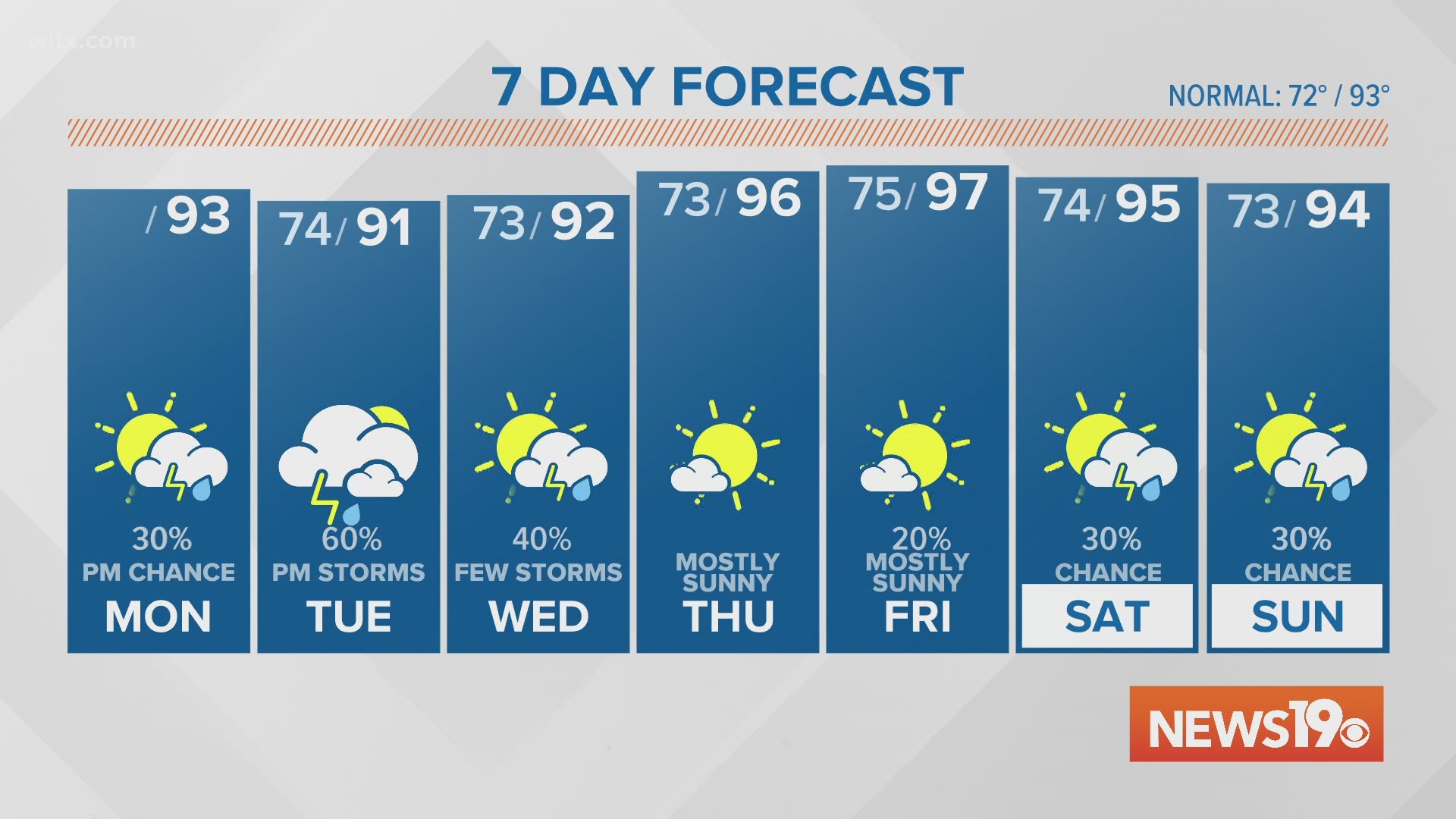 COLUMBIA, S.C. — An unsettled weather pattern is setting up across South Carolina for the first half of the work week. Monday will feature plenty of sunshine for most of us, but a disturbance to our northwest will bring a chance for heavy rain this evening or early overnight in the upstate and northwestern Midlands. Then tropical moisture from an area of low pressure off the coast of Florida will fuel afternoon thunderstorms capable of producing heavy rain across the Midlands on Tuesday and into Wednesday.

Monday will be mostly sunny to partly cloudy across the Midlands and humid. There is a low risk for thunderstorms, but a pop up shower is possible in the afternoon in the Midlands. Heavy rain is possible east of I-95 along the coast with the sea breeze. A disturbance toward the upstate will fuel showers and thunderstorms in the afternoon and the evening in the NW part of the state. Some of these storms will bring evening showers and storms to the northwestern Midlands after sunset.

RELATED: Heavy rains cause flash flooding on some roads in Columbia, Lexington County

The Weather Prediction Center has issued a marginal risk for excessive rain in the northwestern Midlands including Newberry, Fairfield, and Kershaw counties as well as eastern Lexington, Richland, and Lee counties. This is a level 1 out of 4 risk which indicates a 5-10% chance of flash flooding. Parts of the Upstate are under a level 2 out of 4, or slight risk, for flash flooding today.

RELATED: Why now is the time to remove dead trees from your property

Watching the Tropics for Tuesday

Meanwhile, off the coast of North Florida and Georgia, a tropical disturbance designated Invest 90-L has a 30% chance of organizing over the next 48 hours according to the National Hurricane Center as of their Monday morning analysis. The disturbance will likely be near or over land late Monday or Tuesday and move northward into Georgia and South Carolina. Regardless of development, tropical moisture will funnel into South Carolina on Tuesday and enhance shower and thunderstorm activity across the state in the afternoon.

Thunderstorms are expected on Tuesday. There will be a mix of sun and clouds throughout the day with a morning shower in the eastern Midlands and pop up thunderstorms in the early afternoon becoming widespread later in the day. Storms will be capable of localized flooding. The Weather Prediction Center has issued a marginal risk for flash flooding for the entire state on Tuesday. Up to an inch of rain is possible with locally higher amounts in some storms.

July has been a wet month across the Midlands. The Columbia Airport has reported 12 days of rain (three days with over an inch of rain) and is running a surplus of 1.85" as of July 26. Although the weekend was dry across the Midlands and widespread rain has not occurred in the Midlands since last Tuesday, July 20, the ground is still saturated enough for flooding to occur quickly in any downpours.