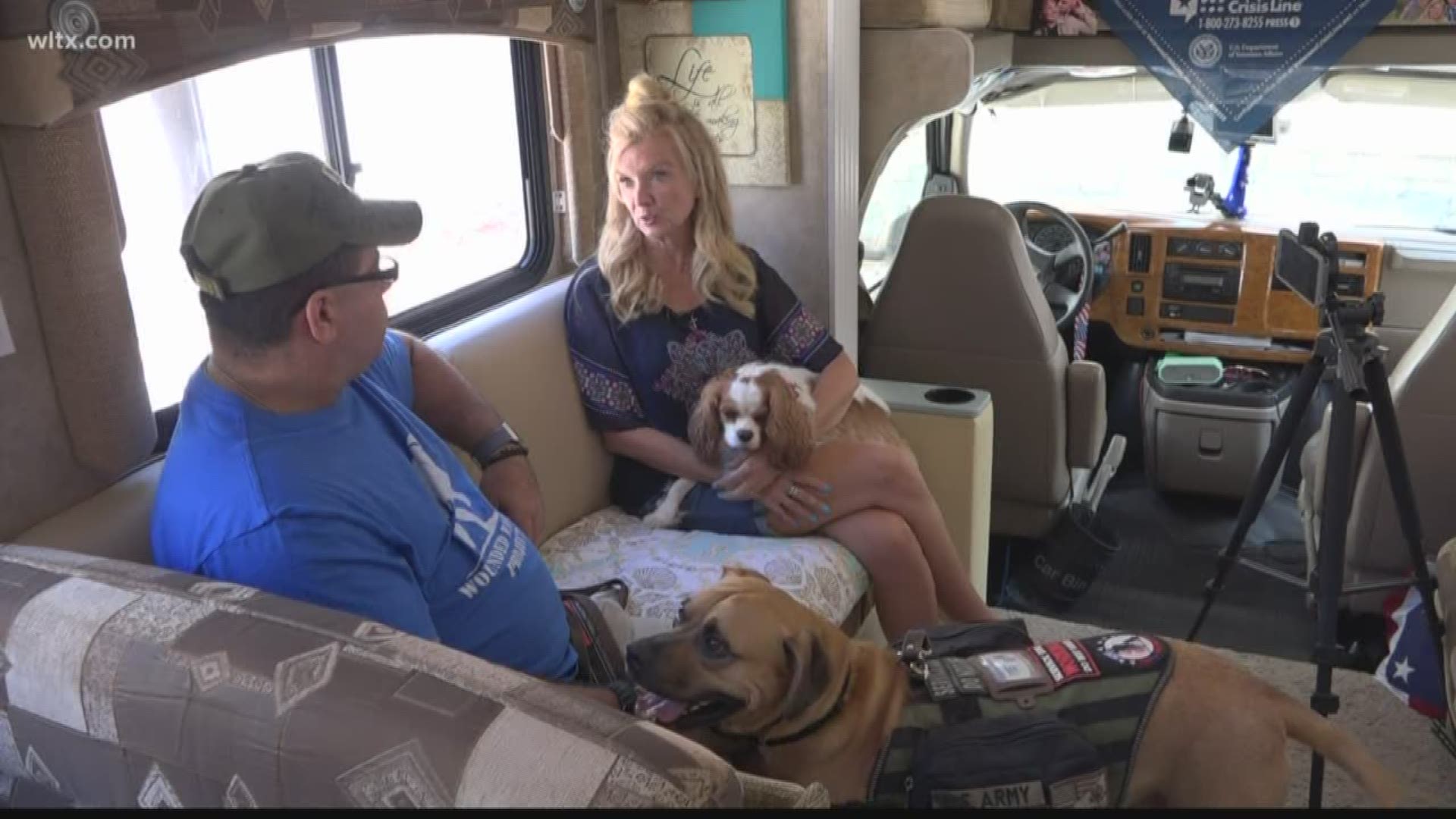 COLUMBIA, S.C. — Many veterans struggle with mental health after returning from combat. To help those heroes, the founder of National Veteran Resources, Michele Ladd, is traveling across the country to speak with those battling mental illness.

Ladd is the mother of two veterans who was inspired to help out the brave men and women that serve our country. She bought an RV, called the Hero Mobile, and set off on an 8,000 mile cross-country tour with her dog, Chellis, by her side. Her goal is to meet with veterans and first responders, learn their stories, then share awareness for PTSD and suicide.

"I'm sharing their stories. Many of them have had multiple suicide attempts, they've been drinking, doing drugs. They have anxiety. They have depression. Together, we're just trying to make a difference and trying to save the lives of our veterans and our first responders," Ladd says.

During each stop on her trip, Ladd interviews veterans and posts their stories on her website and to Facebook.

"It's the most amazing feeling when a veteran gets in this RV and shares things with me that he hasn't shared in years. Usually they have tears, and I have tears. I'm not a counselor, I don't give advice, but I can listen to their stories," she said.

"The statistics are that 22 veterans die by suicide every day. I'm trying to help save lives. We would all love for that statistic to go down to zero so no veterans are dying by suicide at all, for any reason."

Today, the Hero Mobile sat in the parking lot of the Veterans of Foreign Wars Hall. Post 641 Quartermaster, Samuel Ross, says they are excited to have Ladd come visit and stay on their property.

"It's an important feat because we don't have a lot of outside assistance. And for her to want to come to the Veteran of Foreign Wars and assist us, it's most welcome. And vice versa for her -- I think it's something that helps her also," said Ross.

While in Columbia, Ladd met with retired veteran, Rico Reyes, to hear his story. He brought along his service dog, Rucker, and spoke on the benefits of owning a service dog while suffering with PTSD. The two say they are going to work together to make sure these resources are more accessible to veterans.

"I've heard so many incredible stories about service dogs helping our veterans with PTSD and all the things that come along with it. We're going to try to save more lives by sharing stories of service dogs and how they can help," says Ladd.

Check out Rico's full interview aboard the Hero Mobile below.

The Hero Mobile tour will last through October. Check out the Facebook page for daily updates and stories.

If you are interested in upcoming local events for veterans, the Veterans of Foreign Wars Hall is celebrating National POW/MIA day this Friday, September 20. The events starts at 7 p.m. at 534 South Beltline Blvd.