CDC says ¼ of young adults have contemplated suicide this summer

A new report from the CDC, isn’t focused on the just latest physical health update -- but, zeros in on a very important mental health one. The study says staggering 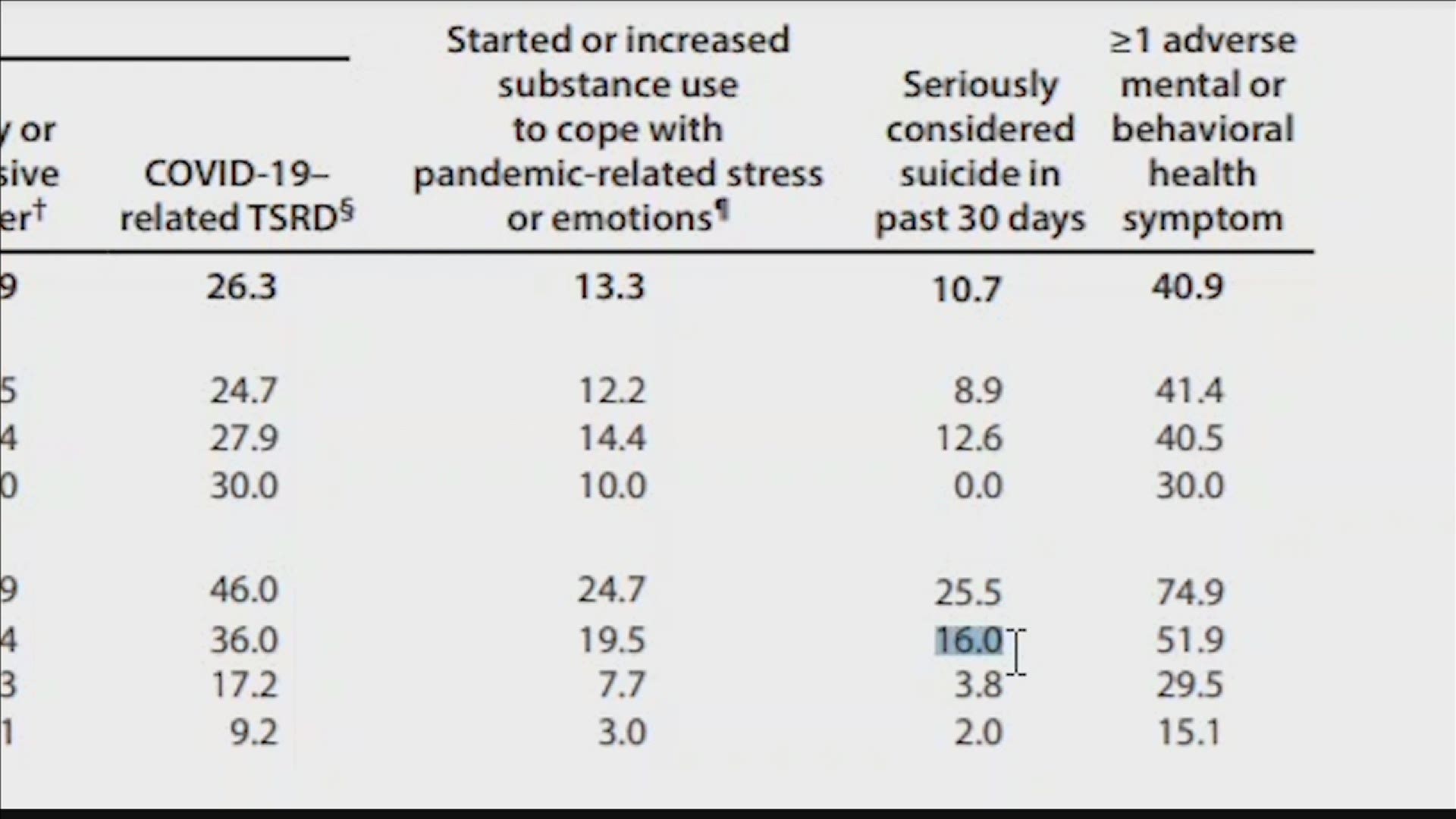 HUNTSVILLE, Ala. — A new report from the CDC, isn’t focused on the just latest physical health update-- but, zeros in on a very important mental health one. The study says staggering numbers of young adults have battled suicidal thoughts this summer. And it could all be related to the pandemic.

One in four-- according to the CDC, that’s the number of young adults who have seriously considered committing suicide this summer during the coronavirus pandemic.

Monretta Vega of Huntsville Psychotherapy and Counseling Services says, It was almost like one day in March everything was okay, then all of a sudden-- things change tremendously.”

The CDC analyzed responses from over five thousand people in the month of June.

But, of those numbers, 25.5 percent of all the people ages 18-24 say they seriously considered committing suicide during the study.

And 16 percent of people ages 25-44 say they had thoughts of suicide too.

The numbers could be related to some of the effects of the pandemic. Vega tells our reporter, “Negative thoughts kind of continue and intensify along with the anxieties and (changing) social cues of the world at the same time. That can really be devastating and just really cause those negative feelings to increase and we look for a solution. That could be why these suicidal thoughts have increased over time.”

We spoke with Connie Kane of Crisis Services of North Alabama to see if they’ve noticed a change.

She says when the pandemic first started, there was a major drop in calls. But now, the number of calls is heading back up. Kane says, “I think this is a real eye opener for us to understand what a great risk suicide is for everybody. The numbers have been steadily climbing, we have seen.”

And if you just want to chat with someone in a moment of high stress, or if you’re worried about a person you love potentially being suicidal and you need advice; CRISIS SERVICES OF NORTH ALABAMA HAS A FREE TEXTLINE (256)-722-8219.

If you, or anyone you know is in need of suicide crisis prevention, you can call the National Suicide Prevention Lifeline at 1(800)-273-TALK.

You can also receive local assistance from Crisis Services of North Alabama using their 24/7 HELPline at (256) 716-1000.

If you are having suicidal thoughts, or you know someone who is, help is available. In the U.S., call the National Suicide Prevention Lifeline at 1-800-273-8255. You can also text with an emotional support counselor with the Crisis Text Line by texting HOME to 741741.

RELATED: App aims to help those with mental health during COVID-19