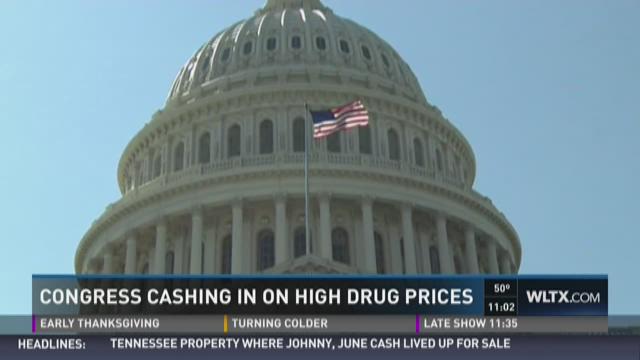 Columbia, SC (WLTX) A Tegna nationwide investigation uncovering lawmakers cashing-in on campaign contributions from drug companies, while their constituents pay more for prescriptions than ever before.
Many of them took campaign cash when creating a law which forbids the government from negotiating drug prices.

When she is playing her cello, you can't tell that Isabelle Killian's finger tips have scabs from the thousands of needle pricks she's had to endure in the three years since she was diagnosed with Type One Diabetes. She tells us, "It was rough at the start, because I didn't really understand it."

There is no cure for Diabetes. So the millions of people in America have to take insulin to regulate their blood sugar. Isabelle explains, "When I'm low, I usually get shakey. I can feel fatigued, weakness. I can't get up. My head is spinning. I'm like, 'woah.' I'm out of it, like slurring words."

Isabelle takes two types of insulin, Lantus and Novalog, to keep her blood sugar in a healthy range. If it gets to high or too low, it means an expensive trip to the hospital, or even death. That insulin costs hundreds of dollars every month. Staci Killian, Isabelle's mother tells News 19, "At first the cost of the insulin was pretty reasonable. The insurance, the company I was with, it was really reasonable. But I've made changes and so the insurance of course changes, and so the cost of the medicine has changed and it is significantly higher."

News 19 uncovered that Lantus has gone up almost 100-percent, Yet, this hasn't received the high publicity as the EpiPen did earlier this year. In September, members of Congress including South Carolina Congressman, Trey Gowdy, grilled the CEO of Mylan, which makes the EpiPen. Another of those lawmakers includes Georgia Congressman Buddy Carter. He's the only pharmacist in Congress. While CARTER and his colleagues criticized Mylan, our investigation uncovered Carter has received more than $14,000 dollars in campaign contributions from drug companies.
In fact, the entire committee which grilled the Mylan CEO took in $366,000 dollars from big pharma since 2012. Congress has accepted at least $27million dollars over the past five years.

We reached out to each of them. Jim Clyburn sent us this statement:
"America's families should not be forced to choose between their medications and their other necessities. The Epi pen price gouging issue demonstrates the dire need for more competition. More oversight and transparency can also address the underlying causes of high drug prices."

Representative Tim Scott sent us this statement: "In the past several weeks, I have learned from constituents about the rising cost of prescription drugs, especially allergy drugs and diabetes medication. I agree that such a rapid increase in price is concerning and should be investigated. I commend the work of the Senate Judiciary Committee and the House Oversight Committee for holding hearings to look into the rapid increase in prices. The American people should remain confident that conservative leadership will provide a viable solution to the quagmire that the Affordable Care Act has been for families across this country. I have already worked to pass the PACE Act, which has provided protection for our small businesses from paying inflated premiums for their employees. I look forward to sitting down with my colleagues next week and determining the best path forward. I will continue to stay heavily involved on this important issue.

An important Biosimilar bill was passed ub 2010 as part of the Affordable Care act. It allowed for a generic version of insulin and other drugs to be made. Representative Jim Clyburn voted for that bill, while Representative Joe Wilson and Senator Lindsey Graham both voted against it.

As congress accepts millions from drug companies, we uncovered lawmakers have helped big pharma making a lot money in return. It happened in 2003, when congress passed a law actually making it illegal for the federal government to negotiate drug prices purchased for Medicare, part D, a taxpayer funded program. That bill is called the Medicare Prescription Drug, Improvement, and Modernization Act. Both Jim Clyburn and Lindsey Graham were in office and they both voted not to pass it. But Representative Joe wilson voted for the bill.
Since it passed, drug companies have made billions in return.

Meanwhile, like the Killians are struggling to pay for rising prescription drug prices. Killian says, "I've been on blogs where people have looked outside of the country just to get affordable insulin and then you are wondering, 'If I can get it outside of the country for that cost, is it legitimate, is it real, is it gonna work?' "

There are about a dozen bills proposed in Congress which could address prescription prices. News 19 will monitor their progress throughout 2017.