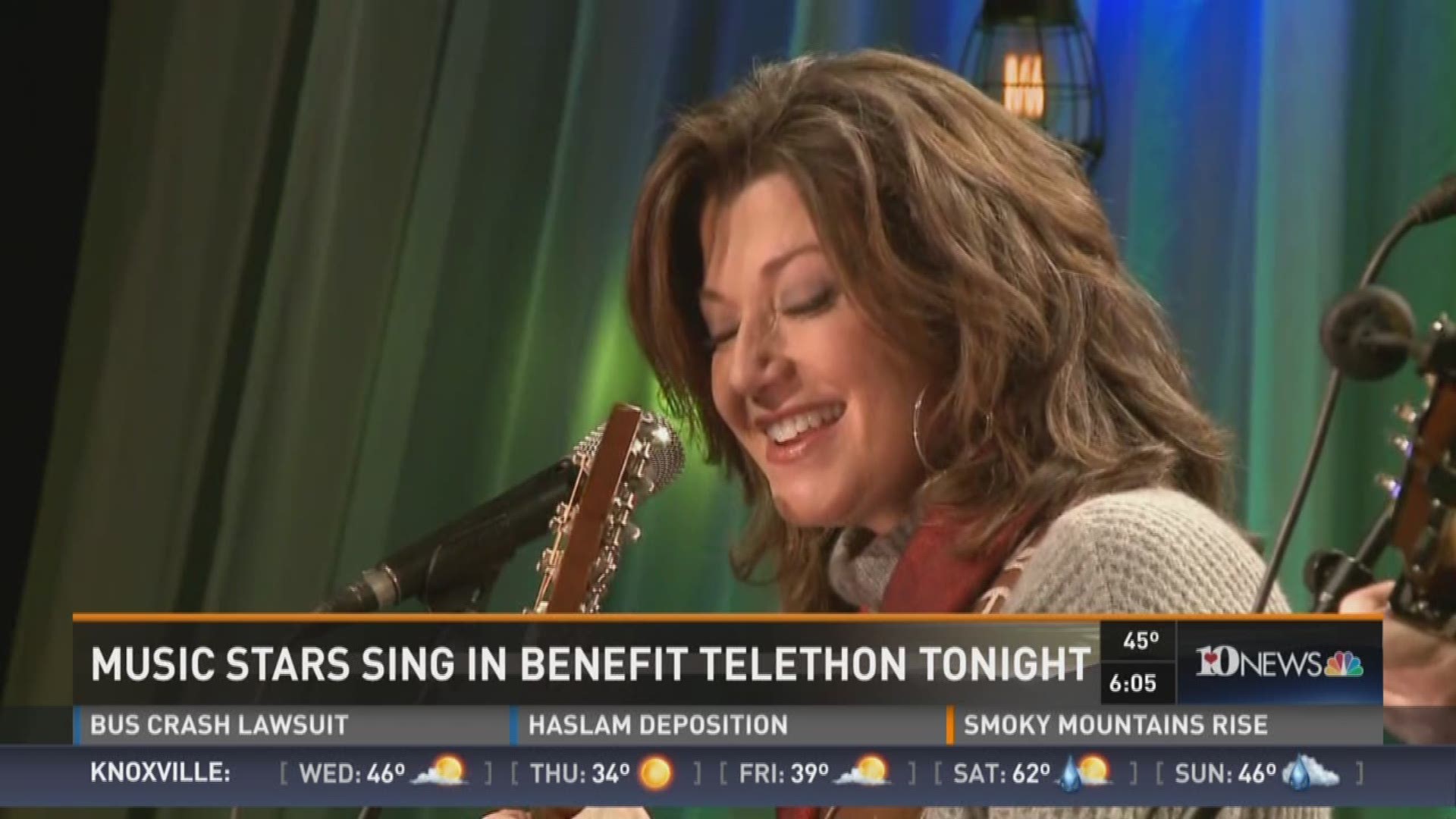 Dolly Parton has arrived in Nashville ahead of her Smoky Mountains Rise telethon to raise money for her "My People" fund, which will aid victims of the Sevier County wildfires.

We spoke with Dolly as she arrived to prepare for the event, and you could tell she was thrilled with the support the telethon is getting from the country music community.

She said so many of them asked "What can we do to help?" and she took them up on it!

"They all love the Smokies," she said. "They all go there!"

Other artists not performing will help with answering the phones and will call into the show with donations.

"This ain't just about it being my home. This is one of the greatest tourist attractions in all of Tennessee, in the south, or the world, as far as I'm concerned," Dolly said.

Dolly, who hasn't had a chance yet to see the damage firsthand, said her family was fine. She said they were her first thought when she heard about the fires.

"They said we're all good but everything is burning around us," she said.

Her many businesses also survived.

Dolly always goes home for Christmas, and said she was sure she'd be devastated when she saw the damage first hand.

"But I will get to go have Christmas with my family in a warm cozy house," she said. But so many won't. Those are the people she wants to help with this telethon.

Nearly $500,000 of donations have already have been committed, but the need is so great. More than 1300 families lost their homes due to the wildfires. The Dollywood Foundation My People Fund will provide $1000 each month for six months to every family who lost their primary residence.

Dolly said they'd like to raise at least $13 million for the fund, so they can provide help even beyond the monthly payment.

Other celebrities committed to help:

During the telethon, viewers will be asked to call 1-866-CARE MORE to donate to the My People Fund.

Anyone who would like to make a tax-deductible contribution to the My People Fund may visit dollywoodfoundation.org. For those wishing to send donations via mail, those contributions should be sent to: My People Fund, c/o Dollywood Foundation, 111 Dollywood Lane, Pigeon Forge, TN 37863.

The lineup of performers and participants continues to grow for Dolly Parton's upcoming telethon to support Sevier County residents who lost their homes in the recent fires.

Hank Williams Jr., Cyndi Lauper, Alabama, Don McLean, Ronnie Dunn, Jamey Johnson and Lauren Alaina have all be added to the list of performers for Tuesday's telethon to raise money for the My People Fund.

All of the celebrities are donating their time and performances.

“Every day I’m touched even more by the number of people who are joining us to help raise money for the people of the Smoky Mountains,” Parton said in a statement Sunday. “It is a special place and I’m honored that these people care so much about what we’re doing through the My People Fund to help those who have lost everything due to the wildfires."

"Smoky Mountains Rise: A Benefit for the My People Fund" will air live on Great American Country, and will also air live on WBIR.com, the WBIR Facebook page, 10News2 and FOX43 WTNZ from 8 to 11 p.m. Tuesday.

“The Academy and ACM Lifting Lives are honored to contribute in a meaningful way to Dolly’s heroic efforts to help the people of her hometown – and when Taylor heard what we were planning, she offered to match our gift, which gives it that much more impact,” said Tiffany Moon, Executive Vice President and Managing Director of the Academy. “We are so grateful to Taylor for her support to the Academy’s charitable efforts through the years, and for helping us and Dolly Parton assist families in need at a time of crisis.”

Several more big names in country music will be joining Dolly Parton for the "Smoky Mountains Rise" telethon on Dec. 13 to benefit the My People Fund that helps people who lost their homes during the Sevier County fires.

“I’m truly honored that these artists are giving their time and energy to help us raise money for everyone affected by the wildfires,” Parton said in a statement Thursday. “I’ve got so many great friends in the industry, and I’m so proud that they were so ready to step up and help me help my people in the Smoky Mountains through this telethon and the My People Fund.”

The telethon will raise money for Parton's My People Fund. The fund will provide $1,000 each month to Sevier County families whose primary residence is uninhabitable or was completely destroyed in the recent Smoky Mountain wildfires.

A pre-application for those affected is available at dollywoodfoundation.org.

All of the artists are donating their performances to the effort, a press release Thursday said.

The telethon will be broadcast on Great American Country, and will also air live on WBIR.com, the WBIR Facebook page, 10News2 and FOX43 WTNZ from 8 to 11 p.m.

USAToday.com and the USA Today National Networks will also live stream the telethon on their affiliate newspaper websites.

PREVIOUS STORY: East Tennessee's favorite daughter will be joined by some major names in country music for a telethon to support the people impacted by the wildfires in Gatlinburg and Sevier County.

Reba McEntire, Kenny Rogers and Alison Krauss are set to perform with Dolly Parton during "Smoky Mountains Rise: A Benefit for the My People Fund" on Tuesday, Dec. 13 at 8 p.m. on Great American County.

The telethon will support Dolly Parton's "My People Fund."

Additional celebrities participating in the telethon are expected to be announced in the coming days.

During the telethon, viewers will be able to call 1-866-CARE MORE to donate to the My People Fund.

Dolly recently released the details for the fund, which will provide $1,000 per month to Sevier County families who lost their homes in the wildfires.

“My home in the Smoky Mountains of Tennessee is some place special,” Parton said in a statement Wednesday. “Wildfires have affected many of the people—my people—who live in those beautiful mountains. We want to provide a hand up to those families who have lost everything in the fires. I know it has been a trying time for my people and this assistance will help get them back on their feet.”

Dolly Parton performs at the LeConte Center in Pigeon Forge on Tuesday, Nov. 15, 2016.

More than $1 million has already been raised for the fund, but the President of the Dollywood Foundation said they believe "substantially more donations will be required to meet the need."

Anyone can donate to the fund by visiting the website or by mail:

The Dollywood Foundation asks for help spreading the word about the effort by using the hashtags #MyPeopleFund and #someplacespecial.

"We want to provide a hand up to those families who have lost everything in the fires. I know it has been a trying time for my people and this assistance will help get them back on their feet," Parton said.