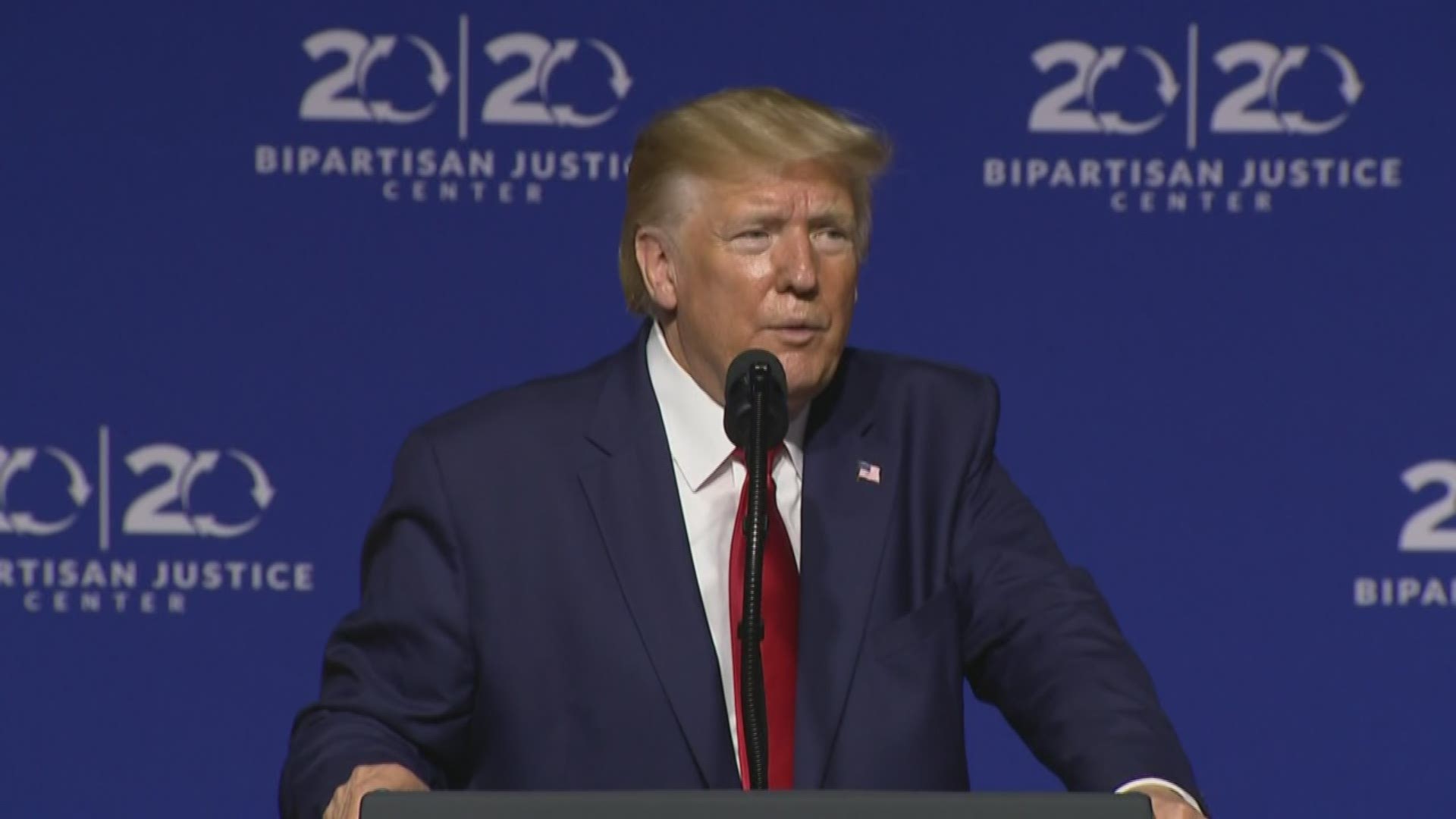 COLUMBIA, S.C. — President Donald Trump used a speech in Columbia to say that his policies are moving forward the issue of criminal justice reform for millions of Americans who are unfairly incarcerated.

RELATED: President Trump coming to Columbia for visit at forum

The speech was the first event in a weekend-long program called the Second Step Presidential Forum, and even put together by the 20/20 Bipartisan Justice Center. The group is a nationwide coalition of Black Republicans, Democrats and Independents focused on criminal justice reform.

It was held on the campus of Benedict College, a historically black college at Columbia.

Before he began speaking, the President received the Bipartisan Justice Award for his work on the issue of criminal justice reform.

During the most of his remarks, President Trump primarily touted the First Step Act, a bipartisan measure he signed into law last December. The law reduces mandatory minimum sentences in some cases, among other changes.  The long-term goal is to reduce the prison population.

"I don't know if it was a popular thing, but it was the right thing to do," Trump said.

He said people from all side of the political spectrum lobbied him for support for the measure.

The president allowed several people who benefited from the measure to speak including Matthew Charles, believed to be the first man released under the new law. Also speaking was Tanesha Bannister to talk, who served 16 years in prison.

"For decades the criminal justice conversation has been a hard one to have," she said. "It was all about the political leaders thinking about who can be tough on crime who can lock up the most and throw away the key it dehumanizes....[The First Step Act] not only freed thousands of people, but it helped rehabilitate us to have us ready to integrate back into society and live a comfortable life."

Last year, at the urging of celebrity Kim Kardashian West and her husband, rapper Kanye West, Trump commuted the sentence of Alice Johnson, a woman who'd been serving an unjust sentence in California. Johnson was in the crowd, and told the audience that never in her wildest dreams did she believe she'd be standing in front of a group such as this when she was behind bars.

"This truly has become a movement," she said. "We who are returning citizens will not allow you to forget."

Trump also said his policies on trade, taxes, and as he phrased it, "putting America first," have contributed to a better job market for those released from prison and millions of others.

"We're acting, not talking," he said.

The president's trip in Columbia began when Air Force One touched down at Columbia Metropolitan Airport around 1:35 p.m. local time. The President was greeted by South Carolina Gov. Henry McMaster and Sen. Tim Scott, as well as other politicians from South Carolina. Aboard the plane with the President were his close political ally, South Carolina Sen. Lindsey Graham, as well as Housing and Urban Development Secretary Ben Carson.

Columbia Police, the Richland County Sheriff's Department and SC Highway Patrol assisting the Secret Service as the president made his way through the streets of Columbia.

This criminal justice forum runs through Sunday and will also feature many of the Democratic candidates. According to the 20/20 Bipartisan Justice Center, Joe Biden, Bernie Sanders, Elizabeth Warren, Kamala Harris, Corey Booker, Pete Buttigieg, John Delaney, Amy Klobuchar, and Julian Castro will also appear. The candidates will not be at the event at the same time Trump will.

The speakers over the weekend will be asked to outline their proposals that would further criminal justice reform. You can purchase tickets to the event here. Tickets for the president's event on Friday are sold out and are no longer available. Tickets are still available for the other events, and are $40 each, and are sold per candidate time slot.

The last time President Trump was in Columbia was in June of 2018, when he came for a campaign event for Gov. Henry McMaster, who was running for re-election. In that stop, President Trump spoke for an hour inside the gymnasium at Airport High School. 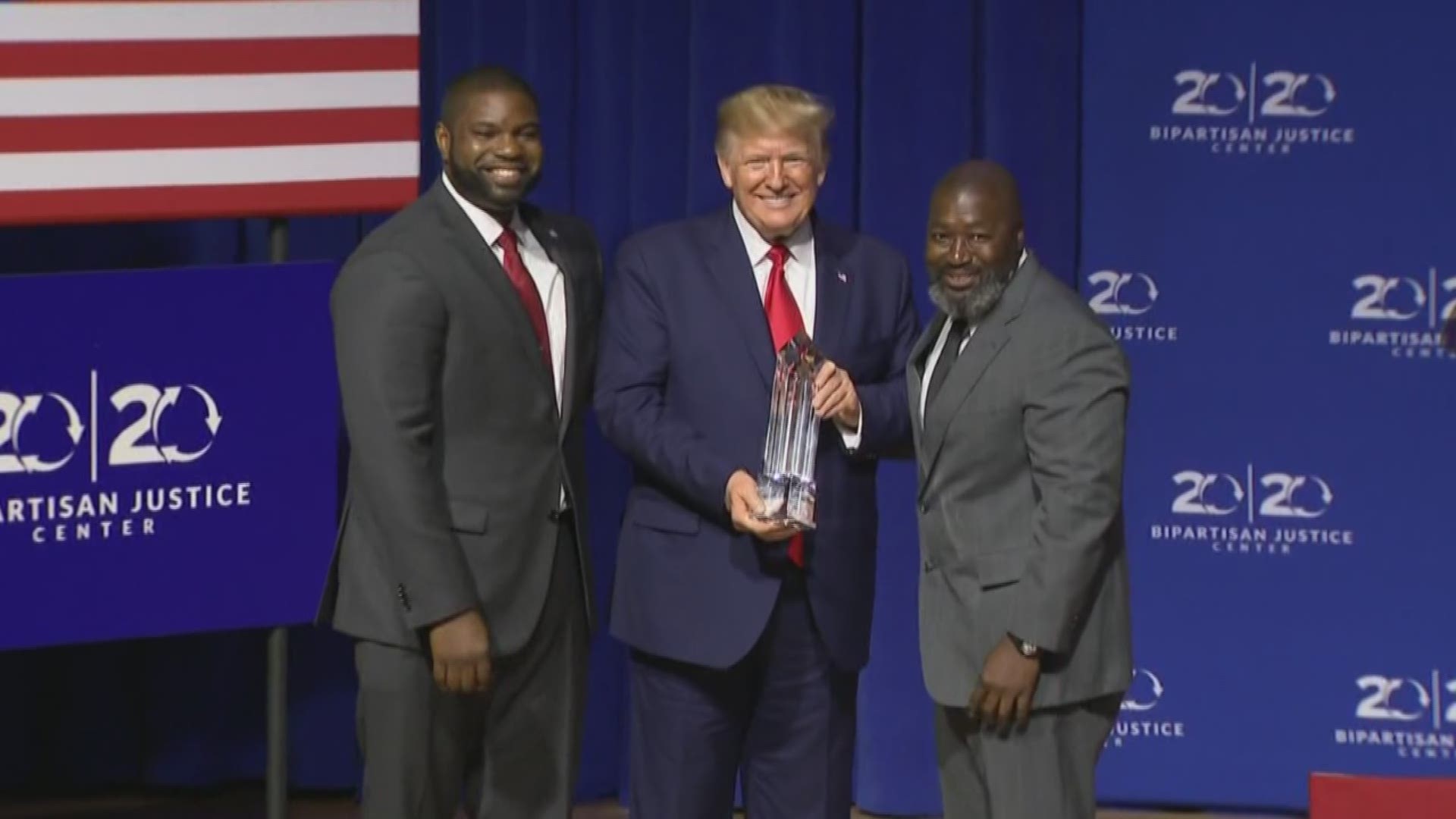