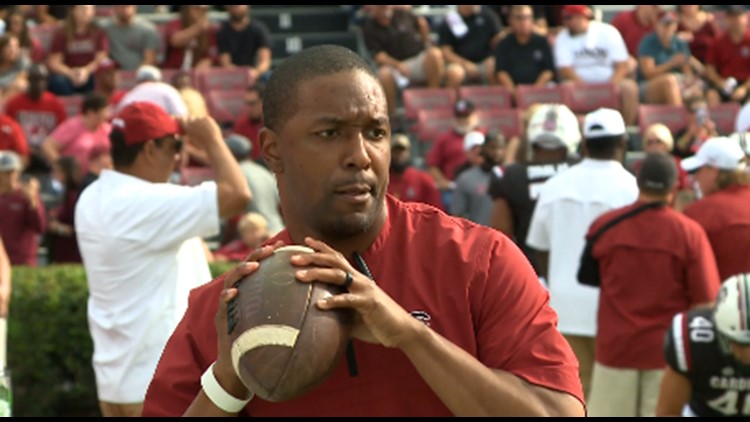 USC wide receivers coach Bryan McClendon works with his receivers during a game at Williams-Brice Stadium.

A shakeup on the Gamecock coaching staff

Bryan McClendon will remain on the Gamecock football staff but it will not be as offensive coordinator.

McClendon has been demoted by head coach Will Muschamp according to multiple reports on Sunday. He is expected to remain as the wide receivers coach but he will not be calling plays.

Quarterbacks coach Dan Werner will not replace McClendon as he was let go by Muschamp on Sunday along with football head strength and conditioning coach Jeff Dillman.

McClendon was promoted to offensive coordinator just after the 2017 season ended. He made his debut in the Outback Bowl which saw the Gamecocks rally for 23 second half points to defeat Michigan 26-19.

The 2018 season saw the Gamecock offense average 30.8 points per game. But after scoring 35 points and generating 600 yards of total offense against Clemson, that unit was shut out by Virginia in the Belk Bowl.

The struggles of the 2019 USC offense have been well-documented. A season-ending injury to Jake Bentley after week one did not help as true freshman Ryan Hilinski was forced to start the remaining 11 games. Shi Smith, Bryan Edwards, Tavien Feaster and Rico Dowdle all dealt with injuries and missed time during the season. But in a results oriented business, the offense is still expected to produce and when it didn't, changes were expected on the staff - especially considering the offense scored just one touchdown in its final three games.

Werner had been at South Carolina for the past two seasons. He was a former Ole Miss co-offensive coordinator who spent the 2017 season as an analyst on the Nick Saban staff at Alabama.

Dillman had been on the USC staff since Muschamp's arrival and had served as his strength and conditioning coach at Florida for three seasons.