With Mother Nature not making up it's in mind, it's putting farmers in a bind and what to do next. 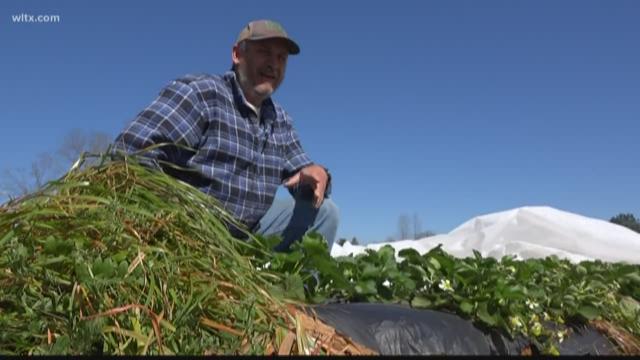 With Mother Nature not making up it's in mind, it's putting farmers in a bind on what to do next.

It's Todd Lever's way of life.

"When we started farming, we figured out you're not in control of it. Take it as it comes. These are our babies. Our strawberries are just our signature. So many people know us by our strawberries," said Lever.

Lever Farms is where he spends hours with his son growing 45,000 of his staple crop. Lever has spent 14 years owning the farm, and one of his favorite parts of the job is when people come by to pick his crop.

This year, Mother Nature is making things a little difficult.

"We've got our fields covered up out here trying to protect them from the cold nights we've had. The last two nights, we had a really hard frost," he explained.

Just two weeks ago, we had that 80-degree weather, which helped things start to bloom. Now, here we are with freezing temps, which isn't making anything easier for farmers around South Carolina.

"This bloom was damaged. That's just because this crop wasn't covered and we don't want our crop to look like that. That's a strawberry we won't be able to harvest this year," he said.

When the weather plays games of its own, it's helped Lever become more creative and build his own wind tunnels to keep his crop protected from frostbite. He actually researched how to build one off YouTube.

"It's kind of like a greenhouse with no heat in it. It'll keep it a little warmer at night so you can start your vegetables or whatever you’re going to grow with them. It just means a lot more work on us but when we got into that, we kind of knew that was part of the game," he said.

While he waits on his strawberries to bloom, his faith continues to grow knowing God will provide — no matter what the weather brings their way.

"It's been a many of nights, I won't tell you any lie, we've been out here on our knees in this field praying over what's going to happen the next day or that night. You just have to know whatever happens that you're taken care of. We do our best to take care of them and leave the rest in the Good Lord's hands," he explained.

Lever hopes that his strawberries will be ready for his customers to enjoy in April.