'Making Something From Nothing,' Man Turns Junk Into Sculptures

In the quite Rosewood neighborhood, things are not always what they seem. 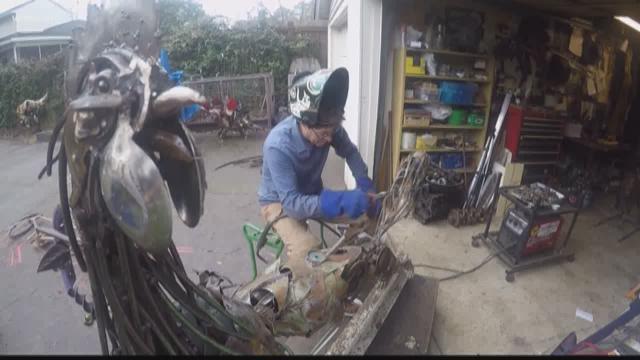 Columbia, SC (WLTX) - One man in Columbia is turning what you consider trash to endless possibilities.

In the quite Rosewood neighborhood, things are not always what they seem.

If you listen, you may hear someone using tools in their shed.

What might be one’s man’s junk, is Andy White’s treasure.

"Ever since I was a kid, I always liked making stuff. I like making something from nothing," said White.

Nails, pieces of wire and scraps of rusted metal are much more than what they seem at first glance.

From finding things on the road, to items given by his neighbors, he likes to create something unique.

White pretty much has anything you may would consider junk in his storage area.

"I started with this bike frame. So this is a frame of a kid's bike off the curb. People give me stuff or I find things on the curb. Believe it or not, it's organized," said White.

What comes out on paper, turns into his reality.

"You assemble it to something that is completely new. I can look at it and say I did that. I have no other way of getting that feeling other than by doing it,” explained White.

He's an archeologist professor at USC during the day, which kind of makes sense why he's made dinosaur sculptures along with a rooster, a firefly, a javelina, and more.

His latest project that he started in November 2017 is a fox.

There’s one goal in mind throughout the months of hard work.

Sometimes when he makes things for people, he says they take the object too literally.

"I'll make this kind of bird and they'll say, 'Well it really doesn't look like that.' What's your problem? If you really want something that looks exactly like that kind of bird, you're not talking to the right guy. It's a piece of art. It's a model. It's a representation. It's not reality. So you have to decide what part of the reality you need to capture and what parts you can add in. That's what makes it interesting and gives it a little juice," explained White.

If you ask him how long it takes to create one of his masterpieces, he’ll tell you it takes a lifetime, because it’s a collection of all that he’s learned throughout his life.

While sparks fly while he’s welding, his love for making things unique continues to grow.

"It's a lifetime of experiences and thinking and trial and error and everything else that gets you to the point where you can make something that somebody else puts value on. They're all one of a kind. What's that worth? I can tell you what it's worth to me," said White.

While he makes it in his free time, he is open to selling one of his special pieces of artwork.