'That violates Florida law': Gov. DeSantis lashes out at cities requiring employees to get vaccinated

"You don't just cast aside people who have been working faithfully over this issue, over what's basically a personal choice on their individual health." 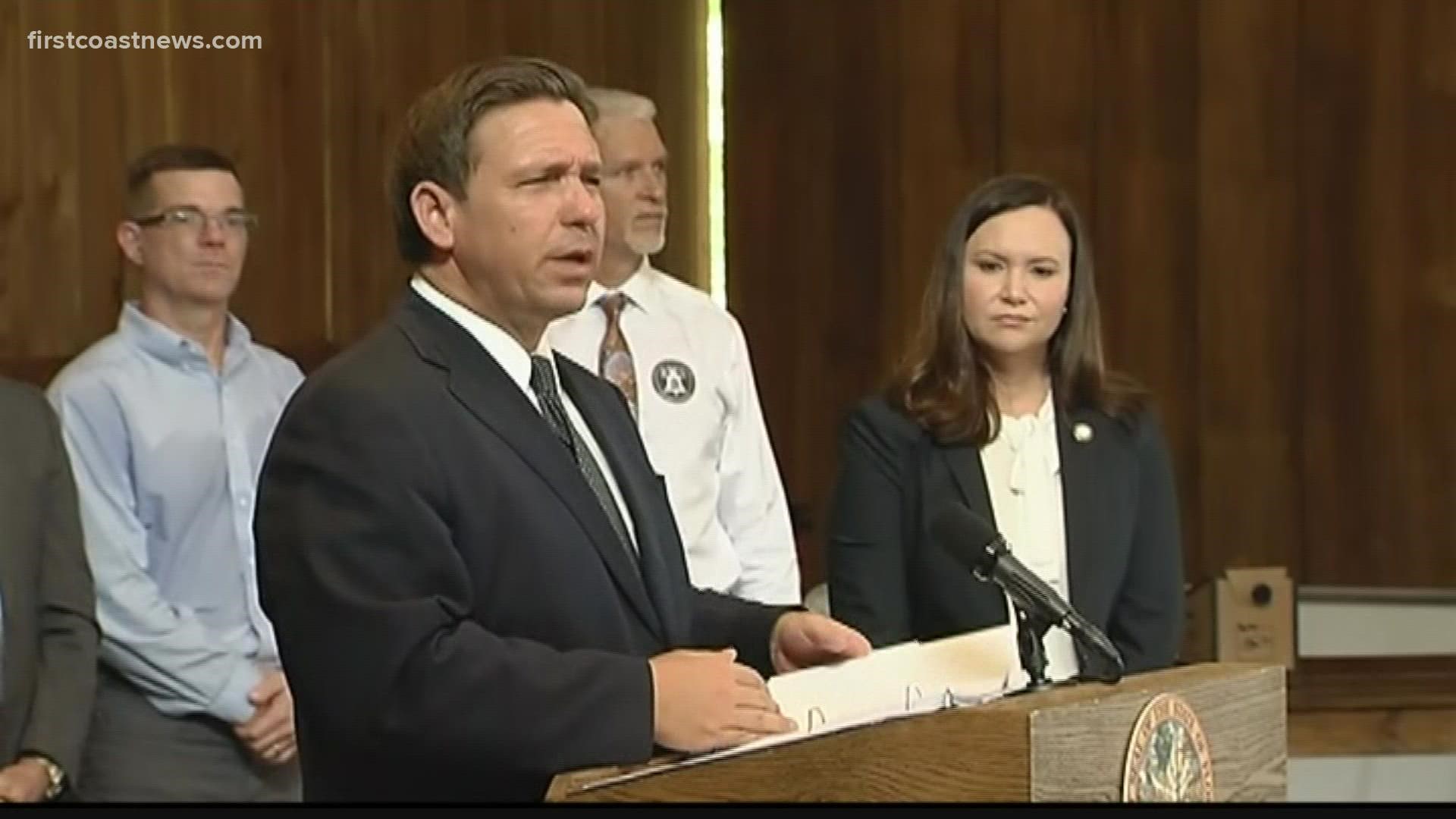 ALACHUA COUNTY, Fla. — Florida Gov. Ron DeSantis said the state will not allow workers to worry about losing their jobs if they choose not to get vaccinated.

"You don't just cast aside people who have been working faithfully over this issue, over what's basically a personal choice on their individual health," DeSantis said to a cheering crowd. "We cannot allow their jobs to be destroyed, and their families and livelihoods eventually to be destroyed as well."

Gov. DeSantis criticized cities that are requiring their employees to be vaccinated, citing first responders who he said, "have already had COVID."

"Most of them, the ones who have already recovered, have very strong immunity," he said.

The governor mentioned SB 2006, which not only bans businesses requiring proof of vaccination for certain services but also banned government agencies from requiring their employees to be vaccinated.

"So if a government agency in the state of Florida forces a vaccine as a condition to employment, that violates Florida law, and you will face a $5,000 fine for every single violation," he said.

DeSantis invited a couple of city employees who refused to receive the vaccine to speak. They proclaimed not only did they believe getting the vaccine was their personal choice, but they felt it was an overreach by the government.

"They're taking away our freedom and liberty, little by little. They're using a vaccine for cover," another speaker said. "Last year, they took away our religious rights. They are not defending our freedom of speech."

DeSantis also questioned whether the Biden Administration had the authority to require vaccines for all federal employees.

"Everyone in his administration for nine months said they don't have the ability to do this, that that shouldn't be mandated," DeSantis said. "This is all political. It's all about using government. And it's wrong."

Earlier, the governor delivered remarks in Gainesville at a much-less politically-charged event at the University of Florida. He was joined by UF President Kent Fuchs at the Emerson Alumni Hall, beginning at 9:30 a.m.

At UF, the governor shared his congratulations to the school for being named one of the top five public universities in the nation by U.S. News & World Report.

"Obviously, it's produced a lot of really good graduates," DeSantis said. "But to see the increase and constantly doing better, I think it's something that all Floridians, regardless of your allegiances, should feel proud about."

Gov. DeSantis said it is not only important to him that Florida is a top school in the country, but it is also affordable.

"We are very, very supportive of making sure that tuition is something that is within reach," the governor said. "We're a big supporter of Bright Futures as well so that our high school students that perform well have an opportunity to go to one of our great universities. Affordability is very, very important."

He touted that having a top public university makes Florida a more desirable place for people to settle in the state.

"I think that's something really, really good for the state," he said.

"The only other thing I'd say is, what a great day, but just imagine what a great week would be if we could beat Alabama on Saturday. So fingers crossed," he said.

At the conclusion of the press conference, the university gifted DeSantis a t-shirt with his name printed on the back and the number '5.'

Scroll down to watch DeSantis' full remarks from UF. 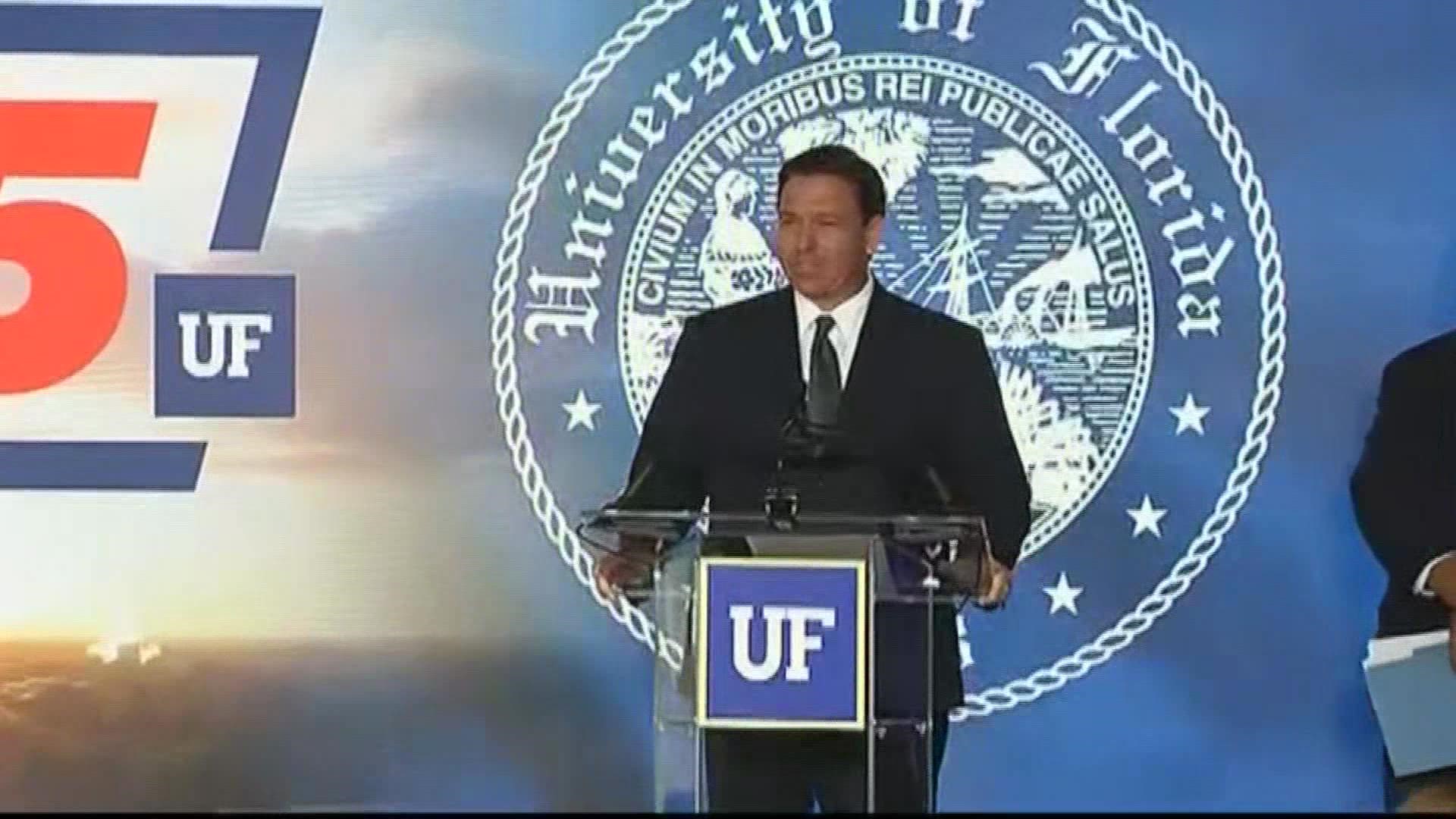