The Joy in the Journey - Clemson navigates its way back to the playoff.

With all the challenges of 2020, Clemson still finds its way to the Final Four of college football. 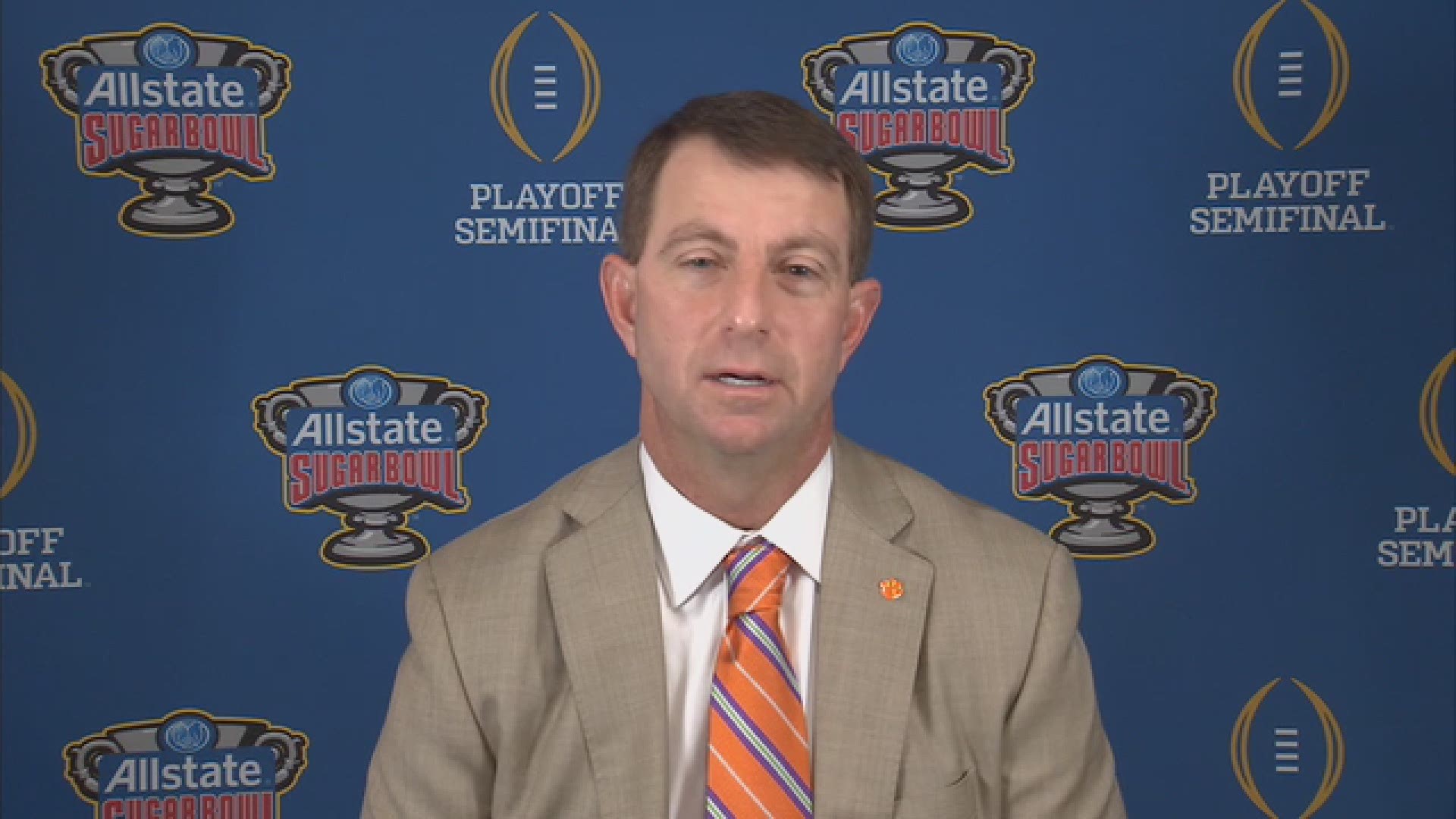 NEW ORLEANS, Louisiana — From high school to college to the NFL, football teams and other sports teams and competitors for that matter, have adapted to certain protocols and challenges in order to get their respective seasons completed in this day and age of COVID-19.

Clemson head football coach Dabo Swinney has seen first hand the challenges of playing a full season in this climate. His starting quarterback missed two games due to testing positive for COVID and his offensive coordinator missed the entire trip to New Orleans after entering COVID-19 protocols.

But the same optimistic attitude that was on display during the summer when the season was in doubt was on display during Friday's news conference with Ohio State head coach Ryan Day. Swinney says all in all, the 2020 season has been positive because of the way his team has overcome the challenges on and off the field due to the virus.

"Everybody has had to adapt. It's been a great year. I mean, it's been challenging for sure. But I always say "God never says oops." That's how I look at it. There are certain things we go through that we don't like. That's how you grow. That's how we get better," Swinney said at Thursday's news conference.

"In a lot of weird ways, as challenging as it's been within our world and what we do, it's also been a blessing. It really has. I mean, it's just kind of been us. It's just been us. And this group has been amazing to be with every single day.

"I'm thankful that we have the type of culture here. That's been awesome to see. It's not an accident that we're here. These guys are great, young people, first and foremost, and we've got a bunch of great leaders. We have a wonderful staff. And it's just been very different. We've had to make a million adjustments in the protocols, how you meet, how you eat, how you travel, how you practice -- you name it -- things you would have never thought of before, but we've made it work."

Swinney says seeing stadiums at 25 percent capacity and some with zero percent was tough at times only because the electric atmospheres were not quite as electric. But the players still made it a point to make their own energy and from top to bottom, his players were there to answer the call.

"So these guys have been great. And seeing guys step up, I mean, we started more guys this year than at any time ever. We've had all kind of guys out here, there, even dealing with coaches out. And everybody just continues to step up. But for me, it's been a great year in a lot of ways, challenging. But again, we all grow through challenges. Learned a lot. Learned Zoom. Never heard of that before (laughter). Learned a lot of new technology. So, you know, that's something that's probably going to carry forward with us forever."

Something else Swinney had to get used to was recruiting was afar. No summer camps, no official visits. It was all virtual.

"Recruiting was very, very different. We've got a couple of guys moving to campus on Sunday that I've never met, like, in person. So it's been unique. We've had to kind of learn our way a little bit. It's all good. It's all good."