Problems started in the morning and didn't get much better as the day wore on. 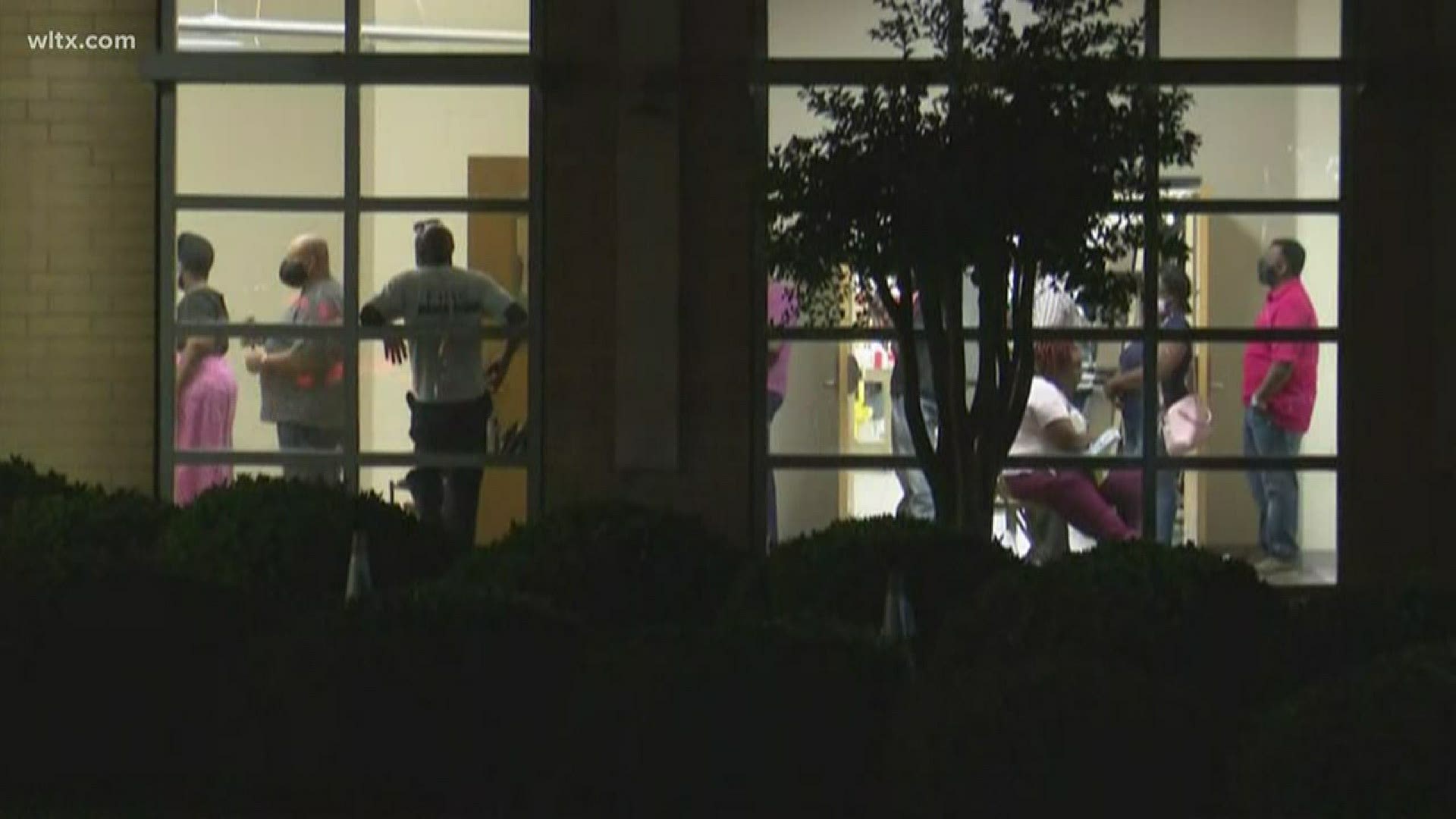 COLUMBIA, S.C. — A list of problems at the polls led to long lines and frustration for many Richland County voters trying to cast their ballots in Tuesday's primary election. Now, some lawmakers are calling for changes to the county's election commission.

At multiple precincts, lines were so long voters waited for hours to casts ballots. Some walked away in frustration. At Spring Valley High School, the line to vote stretched out to the nearby baseball fields over an hour after polls closed. The final vote wasn't cast until 12:45 a.m., nearly 6 hours after polls shut down.

The problems were first reported as soon as the precincts began. Some people went to their precinct and noticed the building was closed, even though online records showed that precinct would still be open. That forced some to drive miles away to another location.

Other people said ballots appeared to be incomplete, or they received the wrong ballot entirely. There was even one case of a poll worker writing names by hand on a provisional ballot.

"One of my clerks was giving handwritten ballots-- or they were writing in a candidate's name on a ballot, which they shouldn't have, they shouldn't have defaced a ballot. And that's something that I don't know what training they have received, what class they received, but that's not something that we have trained them to do," said Interim Richland County Election Director Terry Graham.

Voter Michael Hayes said he nor his wife were able to vote in races in their district.

"A lot of people going to feel disenfranchised because regardless of who they were voting for they were not given the opportunity and no one had answers for us," Hayes told WLTX over the phone on Tuesday night.

Some were told they couldn't vote curbside if they were disabled.

Complicating matters was the COVID-19 crisis, where people were still trying to maintain social distancing, although tight hallways in precincts made that hard.

Interim Director Graham explained why some off the problems happened. He said they had to close about half of their polling places. There was also a lack of poll workers.

"Which we did have poll workers not show up, we had a clerk just yesterday agree to work over the weekend and change his mind said he didn't want to work cause he was concerned with the COVID-19, which is understandable. And like I said, not having enough poll workers is a contributing factor to the long lines today," Graham said.

Graham also said the social distancing requirements led to fewer machines in each precinct, as they had to be six feet apart.

He admitted staff training was not as successful as they thought. The Governor's Office sent some members of the South Carolina State Guard in to help serve as poll workers.

Richland County Voter Registration and Elections Board Chairman, Dr. Charles Austin, said he was keeping a log of every problem to try to fix them before November.

"Yes yes, we’re going to intensify our recruitment efforts for poll workers. We’re going to also establish a re-training process for our current poll workers. And I believe the combination of those things will help the process move more smoothly and also should reduce the number of disconnects that we experienced," Austin said.

He also said communications issues were causing the confusion over polling locations.

"We’ve posted all of the changes at the locations that were not going to be open, so again, that is a communications disconnect that we have to take ownership of. And, we have to move quickly to ensure that that problem does not reoccur," Austin continued.

All staff and poll workers will be retrained before November and the Board will choose a new permanent Elections Director, according to Chairman Austin.

Some state lawmakers and officials in Richland County expressed frustration about what happened:

“My worst nightmare came true. This is unacceptable. We’ve got to make significant changes in how we appoint our boards and commissions. I’m inclined to ask state election commission to take over our county’s election process.”

“As I do every election, I spent time today visiting polling locations in our community and thanking the volunteers. From my visit and conversations with the poll workers, as well as the voters waiting in line, it’s apparent we still have issues in Richland County.

"While I look forward to the report from the election commission and the election office, I know what I’ve seen first-hand today. Too few staff. Too few equipment. Too many problems.

"Certainly, this pandemic affected the number of volunteers; however, when names of volunteers from the South Carolina State Guard are given to your county election office, and those volunteers are not contacted, it makes me question the judgment of the office.

"When FIVE large precincts are combined into one location and only two keyboards to sign-in voters are sent to the poll, it makes me question the judgment of the office.

My colleagues and I are tired of this constant struggle on behalf of our voters and it is absolutely imperative the Richland County Voter Registration & Elections Officer and the Election Commission review what went right and wrong and fix any issues long before the November elections are here."

"This is just a really epic failure of really small things that add up."

"The S.C. State Elections Commission is going to have to figure out why their training programs are failing. We are getting reports of incorrect ballots being uploaded, candidates names being left off the ballot, polling managers trying to persuade voters to participate in different primaries as opposed to the ballot requested and just mass confusion because there appears to be no rhyme or reason as to how precincts were consolidated. There are problems in every corner of this state.Turnout was great today but those running our elections can’t get it right. This doesn’t bode well for November. But thanks to our SCDP Voter Protection Unit, our SCDP Voter Protection boiler room comprised of 25 attorneys Statewide and over 100 poll watchers we will not allow a single voter, anywhere in this state to be disenfranchised. On the positive side we have seen over 100,000 Democrats cast ballots during COVID-19, when typically absentee ballots favor Republicans candidates in this State. There are at least 175-250 discrepancies in voting we can confirm have been reported."