A petition group has more than 100,000 signatures on various rename and removal measures, as lawmakers say Tillman could go 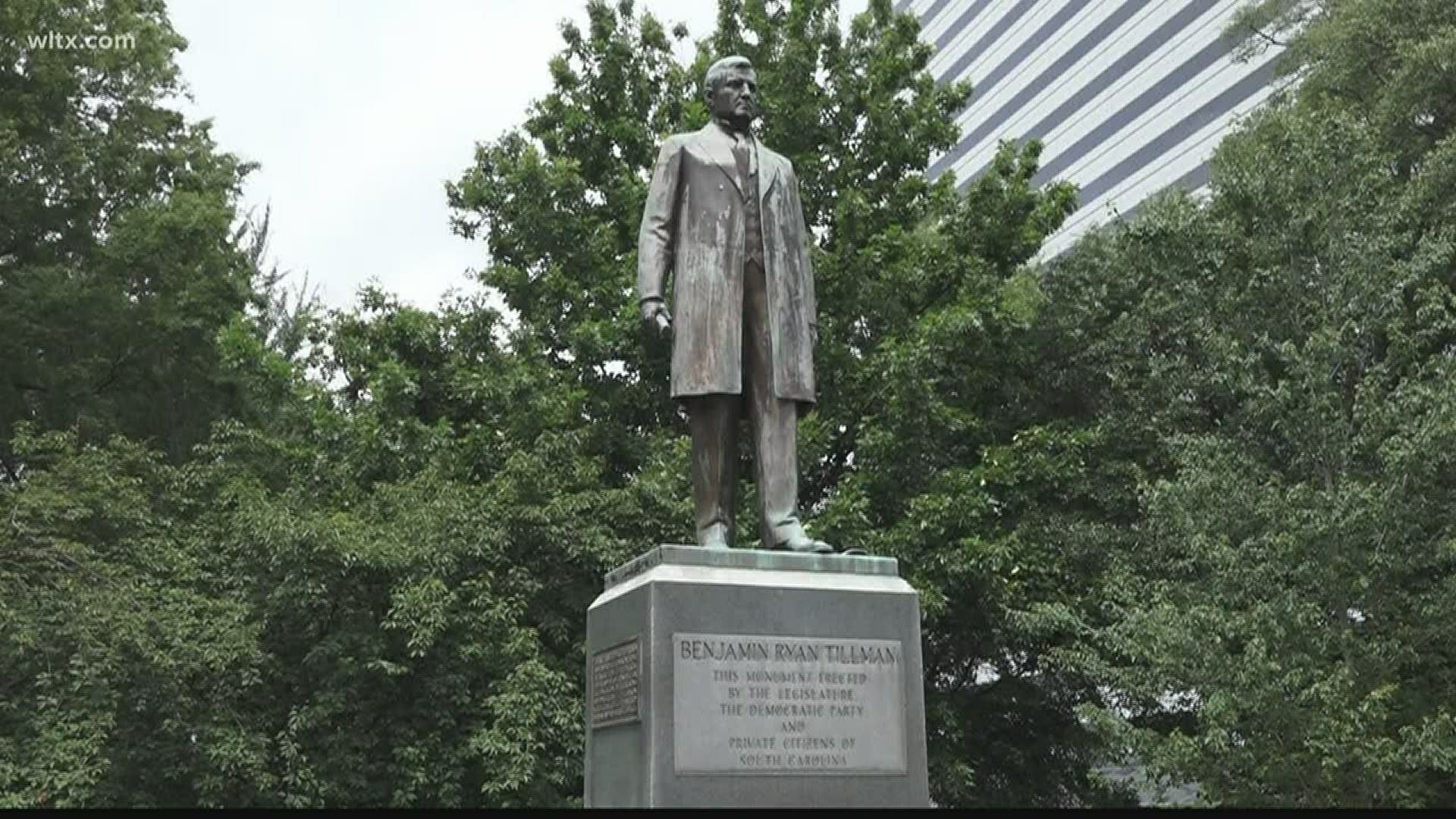 COLUMBIA, S.C. — As crews work to remove Charleston's statue of John C. Calhoun, other controversial statues are coming down across the country.

Lawmakers at the South Carolina State House said it's time for a conversation about the building's controversial monuments and statues.

The grounds of the South Carolina State House are under more scrutiny as historians and lawmakers grapple with what to do about controversial monuments and statues.

At least four statues on the grounds tie directly to the Confederacy, while other markers and memorials mention South Carolina’s Confederate past and involvement in the Civil War.

Inside the building, a statue of John C. Calhoun stands between the House and Senate chambers.

Robin Waites with Historic Columbia said they've taken the position it's time for at least one of the State House’s statues to go.

“So the position that we have taken just this past week is connected directly to Benjamin Tillman, and that was in response to Representative Rose's resolution that monument come down,” Waites said Wednesday.

The statue of Benjamin Tillman is the subject of a petition movement and lawmaker resolution demanding it be removed.

Tillman did not serve in the Confederacy, but was pro-lynching and also involved in the Hamburg Massacre, which led to the deaths of six African Americans. Tillman served as a politician in the Reconstruction Era through early 1900s.

His is just one statue recognizing the Civil War and pro-segregation Reconstruction Era of the state's past.

Other statues and monuments inside and outside the building recognize Civil War military leaders, soldiers, nurses, and secession itself.

“I think anything that represents a history or glorification of white supremacy that is damaging to us being able as a community to move forward in an equitable way, then those need to be considered for removal,” Waites added.

Recently, the ‘Repeal the South Carolina Heritage Act’ group has called to repeal the Heritage Act and make other changes with petitions garnering more than 100,000 signatures combined.

Their main effort is to repeal the Heritage Act, which they say defends offensive monuments and statues, as well as building and park names.

Lawmakers have different approaches to the issue, like Richland County Representatives Ivory Thigpen and Nathan Ballentine.

“I think you have to remove monuments that honor, particularly ideologies, that were so harmful and hurtful in the past. It really makes it hard to take someone at face value about being serious in moving forward as one state,” Thigpen said on Wednesday.

He called for the Confederate era monuments and statues to be moved to a museum.

RELATED: Here are the monuments that honor Confederates at South Carolina's capitol

“I think they are perfect items to be placed in a museum and I think in a museum, the role, the actual story behind them I think is the most appropriate place for them to be placed. I think that we can find other figures that are more unifying, I think we can celebrate and honor other stories and individuals,” Thigpen said.

Waites said museums are more equipped to add historical context to both what the monuments or statues are honoring, and what was going on in the time period in which they were created.

“The thing comes eventually to where do we stop this? Certainly, from my colleagues, from people I talk to, if you want to bring it close to home here to the State House; the Ben Tillman statue is one that is very offensive. Could we make an exception for that? That's probably something I could support. But the bigger picture is why are we looking to bring everything down? Instead of building up?” Ballentine said.

Ballentine said it’s time to have a conversation and discuss the future of the various monuments, but stopped short of calling for universal removal.

“There are 170 people here that represent people throughout the state, that don't look the same, don't talk the same, etc. I'm cognizant of that, and that's why I'm willing to have the conversation and I'm willing to reach across the aisle, I know that's a cliché. Again, if the Ben Tillman statue is the most oppressive, and that's the one that has the most consistence and the votes are there to remove that, I can remove that. But we cannot continue to remove and rewrite history. Let's instead of tearing things down, let's build them up,” Ballentine said.

The Richland and Lexington Republican said lawmakers should focus on criminal justice reforms, which he said would lead to helping more people.

He also said the state should consider adding more monuments to the State House grounds, like the existing African American History monument.

However, both lawmakers agreed at least one change should be considered in the Heritage Act. Thigpen and Ballentine said they support colleges and universities having the freedom to change building names without General Assembly approval.